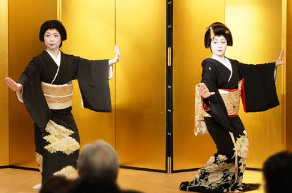 Hello  how is it going?  Today’s subject is “Geisha” whose word is well known as a representative of Japanese culture around the world, and it was considered one of “Cool Japan”.

Geisha are traditional Japanese female entertainers who act as hostesses. 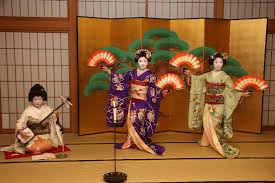 These women dancing with such elegance are Maiko (about which is prescribed at Maiko site) and Geiko called in Kyoto, who is almost the same as Geisha using in Tokyo, female entertainers who perform traditional Japanese music and dances at exclusive parties.

What’s difference between a Geisha and a Maiko, then?

Roughly speaking, the difference between a geisha and a maiko: maiko wear colorful kimono with long sleeves and appear with their own hair worn up with a variety of extravagant hairpins (known as kanzashi). 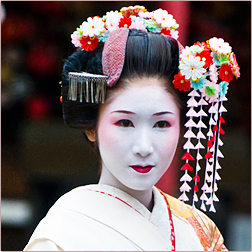 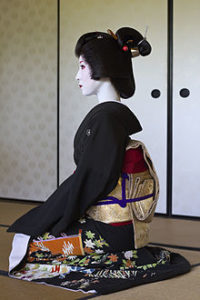 As I explain it in more details, an apprentice/trainee of Geiko in Kyoto is called as a Maiko,literally “Woman of Dance”, whereas an apprentice/trainee of Geisha in Tokyo is a Hangyoku or Oshaku, literally hangyoku “Half-Jewel” (meaning that they were paid half of the wage of a full geisha),or by the more generic term o-shaku , literally “one who pours alcoholic bevarages such as Sake or beer etc.”. 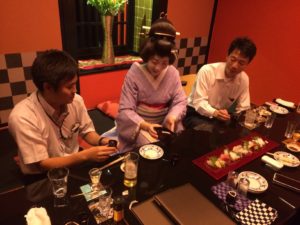 After tough and rigorous training for apprentice Geisha for many years, Maiko promoted and changed their name to Geiko in Kyoto, while Hangyoku or Oshaku to Geisha in Tokyo.

Regarding their appearance including makeup, hairstyle, kimono and footware are at a first glance almost same impression from Geiko of Kyoto and Geisha of Tokyo.

Needless to say, however, according to their status and rank, there are many small differences such as hairstyle, dressing, and footwear during their apprentice days.

Take their footwear:tall wooden clog for instance, Pokkori or Okobo are called and wore by Maiko only.

Why their clog’s heel is so tall? That’s because to keep her kimono from dragging on the ground. Learning to walk in this outfit without falling over is part of their training. 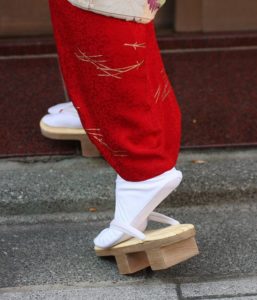 The darari obi is a 6-7 meters long obi worn exclusively by maiko.

A geisha is a woman highly trained in the arts of music, dance and entertaining. Geisha is Japanese for “person of art.”

She spends many years learning to play various musical instruments, sing, dance and be the perfect hostess in a party of men. A geisha, when she is working, is just that: the illusion of female perfection.

A geisha’s makeup, hair, clothing and manner are calculated to indulge a man’s fantasy of the perfect woman, and men pay huge sums of money to have geisha attend to their every whim.

Many Westerners confuse geisha with prostitutes. Those who understand the intricacies of Japanese culture explain that a geisha is not a prostitute.

A true geisha is successful because she projects a sense of unattainable perfection.

When men hire geisha to entertain at a party, sex has nothing to do with it. they entertain with singing, music, dance, story-telling, attentiveness and flirtation.

She can speak about politics as easily as she can explain the rules of a drinking game. In a time when Japanese wives were excluded from public life in general, geisha were the women who could play the role of attentive female at business gatherings.

The original geisha were men

They entertained all over Japan — social restrictions dictated that women could not entertain at a party. These men kept the conversation going, gave artistic performances and flattered guests at parties thrown by noblemen and other members of the upperclass. 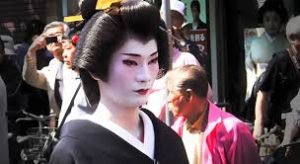 He is a male geisha

Let’s trace the roots of the geisha back to the 1200s with a group called the shirabyoshi who were female dancers, prominent in the Japanese Imperial Court, and who performed traditional Japanese dance.

A painting by Katsushika Hokusai of the most famous Shirabyōshi, Shizuka Gozen (Lady Shizuka), who was the lover of Minamoto no Yoshitsune who ended in the hero of a tradegy.

Although shirabyoshi were not geisha by any means, they were similarly trained and educated in the arts. The profession of shirabyōshi developed in the 12th century. They would perform for the nobility and at celebrations.

They are sometimes referred to as courtesans in the English language, but that term refers to a high-class prostitute, so this is rather incorrect.

By nature they were performers. Some shirabyōshi did sleep with their patrons and give birth to nobles’ children, but this was not their intended purpose as entertainers.

They evolved into Oiran from the 1600s who continued through the Edo period. Looking back on art and other visual references, the easiest way to differentiate them from geisha is the obi (sash); an oiran wore her obi to the front so she could re-tie it multiple times by herself throughout an evening.

Oiran were courtesans in Japan. The oiran were considered a type of yūjo “woman of pleasure” or prostitute.

However, they are distinguished from ordinary yūjo in that they were entertainers, and many became celebrities even outside the pleasure districts.

Their art and fashions often set trends and, because of this, cultural aspects of oiran traditions continue to be preserved to this day. 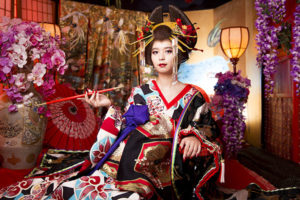 Oiran culture brings us to geisha. Perhaps most surprising of all is that the first geisha were not women at all, but men; though they only continued in this field for about 20 years before women became more common.

Their original role was assisting with entertaining guests, but they were not allowed to have direct contact with the guests at all because the oiran feared they would steal customers.

The first geisha that comes close to resembling today’s performers can be traced to the 1700s; this was when they made a clean break from the oiran to entertain clientele with artistic pursuits such as playing instruments. 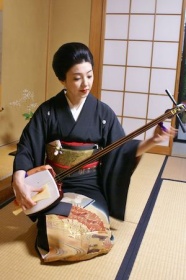 Note that prostitution was legal with proper licenses during the Edo period. These were held by oiran and lesser prostitutes, but geisha were strictly forbidden from holding such a license. 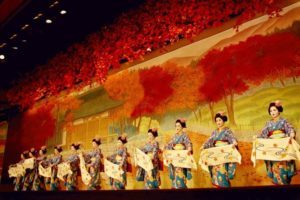 Mizuage (“hoisting from water”) was a ceremony undergone by a Japanese maiko (apprentice geisha) to signify her coming of age.

When the older geisha (in charge of the maiko’s training) considered the young maiko ready to come of age, the topknot of her hair was symbolically cut.

Until it was outlawed in 1959, a maiko undergoing mizuage was often sponsored by a patron who then had the right of taking the maiko’s virginity.

Mizuage has been long connected with the loss of virginity of a maiko, but this practice was made illegal along with other acts of prostitution in 1959.

Afterward, a party would be held for the maiko.

According to anthropologist Liza Dalby, mizuage was an important initiation to womanhood and the geisha world.

Mizuage gave way to the next stage of training, the senior maiko.

Once the mizuage patron’s function (of deflowering the young maiko) was served, he was to have no further relations with the girl.

The money acquired for a maiko’s mizuage was a great sum and it was used to promote her debut as a geisha.

At the same time, Arthur Golden’s book Memoirs of a Geisha is written about a maiko (trainee geisha) selling her virginity to the highest bidder.

If this was “a thing” then every geisha would have experience of prostitution at least once during their lifetime.

But as it was illegal for geisha, okiyas (boarding houses) would lose their business licenses if caught.

So did this occur?  The answer is probably yes in some instances, but it was never acceptable or legal, even during the Edo period.

So how did we come to consider geisha prostitutes?  The answer is simple. Allied forces engaged in prostitution with girls dressed as geisha roaming the streets during the occupation after World War II.

Not every girl that wears a red dress is a prostitute and not every girl with a white painted face is a geisha.

Soldiers went home to America and spread the news about how they “got themselves a geisha girl”, when they had actually been with a prostitute.

By understanding the history of geisha and their conception, we can appreciate their role within Japanese cultural heritage and their skilled performance.

They are wonderful entertainers and remarkable women who strive to promote the rich beauty of old Japan.

Spend time with them or see one of their shows to support the preservation of this traditional way of life for future generations.

Japan has a history of supervised prostitution dating back to the Kamakura period (1185-1333). In 1618, during the Edo period, Yūkaku areas were set up and prostitution regulated.

From the late 1880s onwards, various groups, including the Woman’s Christian Temperance Union and Purity Society. lobbied for the end of legalised prostitution.

The Japanese Government resisted these demands on the grounds that they provided effective control of STIs and that without them men’s sexual desires would lead to increased cases of rape and sex crimes.

Under pressure from the abolitionists, in May 1934 the Home Ministry that licensed prostitution would be abolished in the near future, but no action was taken.

During the American occupation of japan following World War 2, prostitution boomed. In January 1946 the General Headquarters of the Supreme Commander for the Allied Powers, issued an order to abolish licensed prostitution.

This lead to the Businesses Affecting Public Morals Regulation Act being passed in 1948. A bill prohibiting prostitution was put before the Diet (Congress) in 1947 but was defeated.

Female Diet members attempted to introduce various anti-prostitution measures until in May 1956 they succeeded with the Prostitution Prevention Law.

The Prostitution Prevention Law, on May 24, 1956 is a law in Japan that aims to prevent prostitution, punish third parties involved in the trade and to protect and rehabilitate women involved in prostitution.

It is also known as the ‘Anti-Prostitution Law’. The law came into force on April 1, 1957, and all provisions were fully effective on April 1 of the following year.

As the law does not punish prostitution per se, (client and prostitute), it is viewed as a preventative law rather than a prohibition law.

Were the geisha prostitutes? The answer is basically No. Reasons of rumors with prostitutes of Geisha spread all over the world, No.1, even though Oiran were high-class prostitutes, we thought Geisha were prostitutes because appearance of Oiran and Geisha were very similar.

No.2. After the war, American soldiers staying Japan played with prostitutes whose costume was just like that of Geisha. So as a natural consequence that they thought the geisha were prostitutes and they rumored that after returning home.

Wouldn’ you like to be treated “Omotenashi” service by Geisha on Sake while in Japan? I very much hope you could be enjoyable with that. Have a good time! 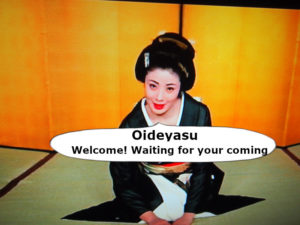 Finally, we have other three websites related to Geisha, “A beautiful life, a Geisha from Australia” and “Maiko”, and “2020 New Year’s Resolution & Hospitality of Geisha from Kyoto & Tokyo” to be well worth a vist, thanks