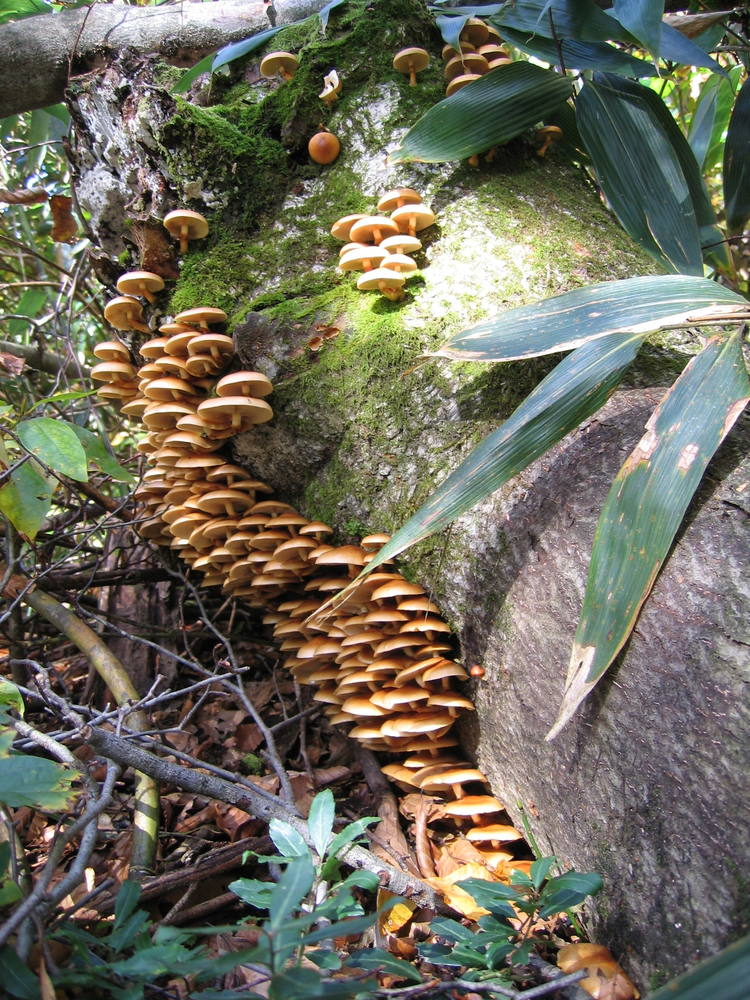 Shirakami-Sanchi (literally white god mountain area) was registered a UNESCO World Heritage Site、natural heritage for the first time in Japan in 1993, along with Yakushima; a small island of southern part of Japan. 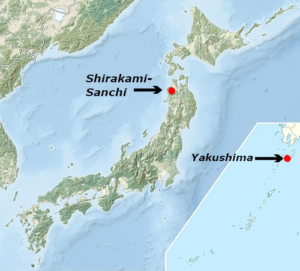 And at the same year of 1993, Himeji Castle, and Buddhist Monuments in the Hōryū-ji Area were entered on the cultural World Heritage List.

Shirakami-Sanchi is located in the Tōhoku region of northern Honshū, Japan. This mountainous area includes the last virgin forest of Siebold’s beech which once covered most of northern Japan.

Fauna found in the area includes Japanese black bear, the Japanese serow, Japanese macaque and 87 species of birds. And permission is needed from Forest Management to enter the heart of the Shirakami-Sanchi.

What’s the main attractions of Shirakami-Sanchi?

That is the various hiking trails that lead through the forests to waterfalls, mountain peaks and lakes. The most popular hike leads to the Anmon Falls on the north eastern side of Shirakami Sanchi.

The Anmon Falls are a set of three waterfalls that lie about 90 minutes into the valley from the trailhead (not accessible from late November to late April). 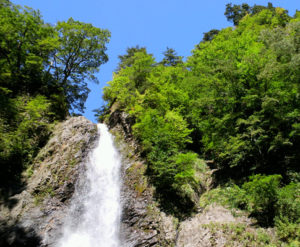 one of the Anmon Falls

The trail to the falls is paved and flat in the beginning and becomes elevated and narrow further into the valley. Shortly before reaching the first waterfall (26 meters high) after about 45 minutes, the trail steepens considerably.

Ten minutes beyond the first waterfall lies the second one (37 meters) where many people stop to rest. Continuing on up the hill to the right of the second waterfall for another 15 minutes brings you to the final and tallest of the falls (42 meters).

Another popular destination are the Juniko (“twelve lakes”), a series of small lakes and ponds connected by hiking trails, on the north western side of Shirakami Sanchi along the coast of the Sea of Japan.

The area offers scenic day hiking, fishing, boating and camping around its lakes and ponds, one of which, Aoike (blue color lake), has enchanted looking, almost unnaturally blue water. There is also a small visitor center, the Juniko Eco-Museum Center Kokyokan, that explains about the area’s beech forests. 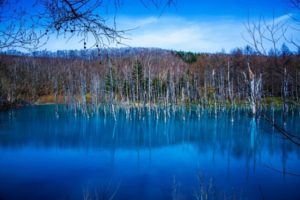 Also be sure to check out the Nihon Canyon, Japan’s miniature version of the Grand Canyon, with walls of colorful brown and grey rock found near the entrance to the Juniko.

A walking trail connects the canyon with the Juniko’s lakes and ponds. From late November through March, however, the roads to the Juniko and the Nihon Canyon are closed and the area is inaccessible. 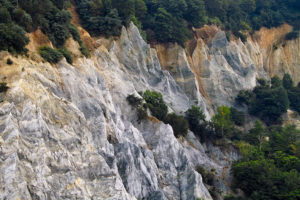 There are various other hiking trails to peaks around Shirakami Sanchi, but many of the trailheads are only accessible by car.

One of the most popular among them is the easy trail to Mount Futatsumori in the south west of Shirakami Sanchi along the prefectural border.

The ascent from the parking lot to the peak is steep, but takes only one hour. Hikers get awarded with commanding views over the mountains and valleys of the World Heritage Site’s core area.

Another popular, but considerably more time consuming hiking course on the north western side of Shirakami Sanchi leads to Mount Shirakamidake, the tallest peak of the mountain range.

It is one of the few hiking trails that can be accessed by public transportation, as the trailhead is only a 30 minute walk from Shirakamidake Tozanguchi Station along the JR Gono Line. The entire round trip to the peak of Shirakamidake takes about eight hours from the station.

There are also a few hiking trails on the eastern side of Shirakami Sanchi, including a small network of walking trails in the scenic Dairakyo Gorge, which lies along Route 317.

An unpaved road branches off from the gorge into the mountains to a hiking trail which leads to the peak of Mount Komagatake and passes the pretty Tanashiro Swamp along its way. 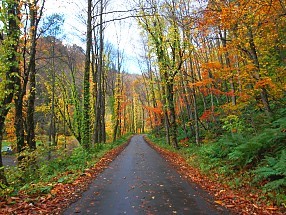 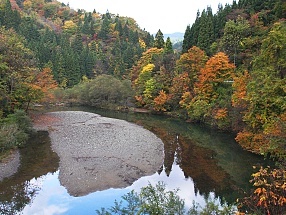 The heart of Shirakami Sanchi’s forest is the protected World Heritage zone that is not usually visited by tourists. Entering the core zone requires a permit, which can be obtained by mail at least seven days in advance (considerably earlier, if sent from outside of Japan), or in person at one of nine offices in the area up to the day of departure (on business days only).

Lastly, there are a few visitor centers around Shirakami Sanchi. The most informative of them are the World Heritage Conservation Center in Fujisato, Akita, which has a museum about the forests, and the larger Shirakami Sanchi Visitor Center between Hirosaki and the Anmon Falls which has an excellent museum with English information and an IMAX theater showing a 30 minute movie on the beech forests. 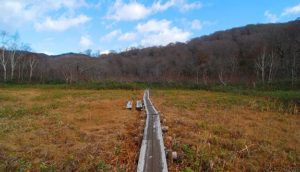 How to get to Shirakami Sanchi

Shirakami Sanchi is best accessed from the north from Hirosaki in Aomori Prefecture, from the south from Noshiro in Akita Prefecture, about a one hour train ride north of Akita City, or through Odate-Noshiro Airport, which has daily flights from Tokyo’s Haneda and Osaka’s Itami Airports.

How to get around Shirakami Sanchi

A rental car is the recommended means of getting around Shirakami Sanchi, because public transportation is very limited and only serves a few attractions along the perimeter of the forests. The closest car rental outlets are found in Hirosaki, Akita, Noshiro, Odate and at Odate-Noshiro Airport.

There are only three main roads of interest for getting around Shirakami Sanchi:

Route 101 travels all along the coast around the western and northern sides of Shirakami Sanchi. Juniko and the trailheads to Mount Futatsumori and Mount Shirakamidake are reached via roads that branch off Route 101. Route 101 is open around the year, but the road to Juniko is not accessible in winter from late November through March.

Route 317 runs from Noshiro City through the mountains on the eastern side of Shirakami Sanchi, passing the Dairakyo Gorge and a mountain pass to meet Route 28 near the Anmon Falls. The Aomori section of the route is a gravel road and the higher part is closed in winter from late November to late May.

The JR Gono Line travels along the coast around the western and northern sides of Shirakami Sanchi between Noshiro and Hirosaki and is famous for its spectacular coastal scenery. The “Resort Shirakami” rapid trains run between Akita and Hirosaki via the Gono Line, stopping at Juniko along the way. Local trains also serve Juniko from Higashi-Noshiro Station.

The Resort Shirakami runs 3-4 times daily during the high season, but only once per day and on weekends only during the off season. The trip to Juniko Station takes about two hours from Akita or 2.5 hours from Hirosaki and costs about 2500 yen one way from either city. All seats are reserved. Local trains from Higashi-Noshiro Station take about 75 minutes and cost 970 yen one way to reach Juniko Station. There are four trains per day. Note that it is not possible to buy tickets or make seat reservations at Juniko Station. Seat reservations should be made in advance.

From Juniko Station there are hourly buses to the Juniko lakes (15 minutes, 360 yen one way) from April until late November. Access to the Juniko is not possible during winter.

The only bus line that provides access to Shirakami Sanchi runs between Hirosaki and the trailhead to the Anmon Falls (and further to Tsugaru-toge Pass). The buses are operated by Konan Bus and run three times per day from mid June to early November. The one way trip from Hirosaki to the Anmon Falls trailhead takes about 90 minutes and costs 1650 yen. A roundtrip ticket is available for 2470 yen.

★ Shirakami-Sanchi Visitor Center
Hours
9:00 to 16:30 (November to March)
8:30 to 17:00 (April to October)
Closed
The second Monday of each month from April to December, every Monday and Thursday from January to March, December 29 to January 3
Admission
Free (IMAX movie 200 yen)
English
Good

★ World Heritage Conservation Center – Fujisato
Hours
9:00 to 17:00 (April to December)
10:00 to 16:00 (January to March)
Closed
Tuesdays (or the following day if Tuesday is a national holiday), Mondays and Tuesdays from January to March, New Year holidays
Admission
Free