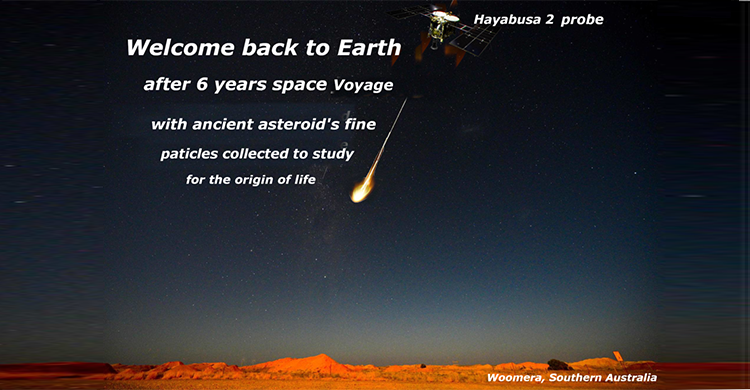 Hello how are you?   Today’s topic is the Japanese space agency said Sunday the capsule from its Hayabusa2 space probe was picked up in the Australia.

In a streak of light across the night sky, samples collected from a distant asteroid arrived on Earth on Sunday after being dropped off by Japanese space probe Hayabusa2.

A Japanese capsule carrying the first samples of asteroid subsurface shot across the night atmosphere early Sunday before successfully landing in the remote Australian Outback, completing a mission to provide clues to the origin of the solar system and life on Earth.

About the capsule with asteroid sample

The spacecraft Hayabusa2 released the small capsule on Saturday and sent it toward Earth to deliver samples from a distant asteroid.

At about 10 kilometers (6 miles) above ground, a parachute was opened to slow its fall and beacon signals were transmitted to indicate its location in the sparsely populated area of Woomera in southern Australia.

About two hours after the reentry, the JAXA (Japan Aerospace Exploration Agency) said its helicopter search team found the capsule in the planned landing area.

The retrieval of the pan-shaped capsule, about 40 centimeters (15 inches) in diameter, was completed after another two hours.

“The capsule collection work at the landing site was completed,” the agency said in a tweet. “We practiced a lot for today … it ended safe.”

Scientists hope the precious samples, which are expected to amount to no more than 0.1 grams of material, could help shed light on the origin of life and the formation of the universe.

“Six years and it has finally come back to Earth,” an official narrating a live broadcast of the arrival said, as images showed personnel from the JAXA cheering and pumping their fists in excitement. 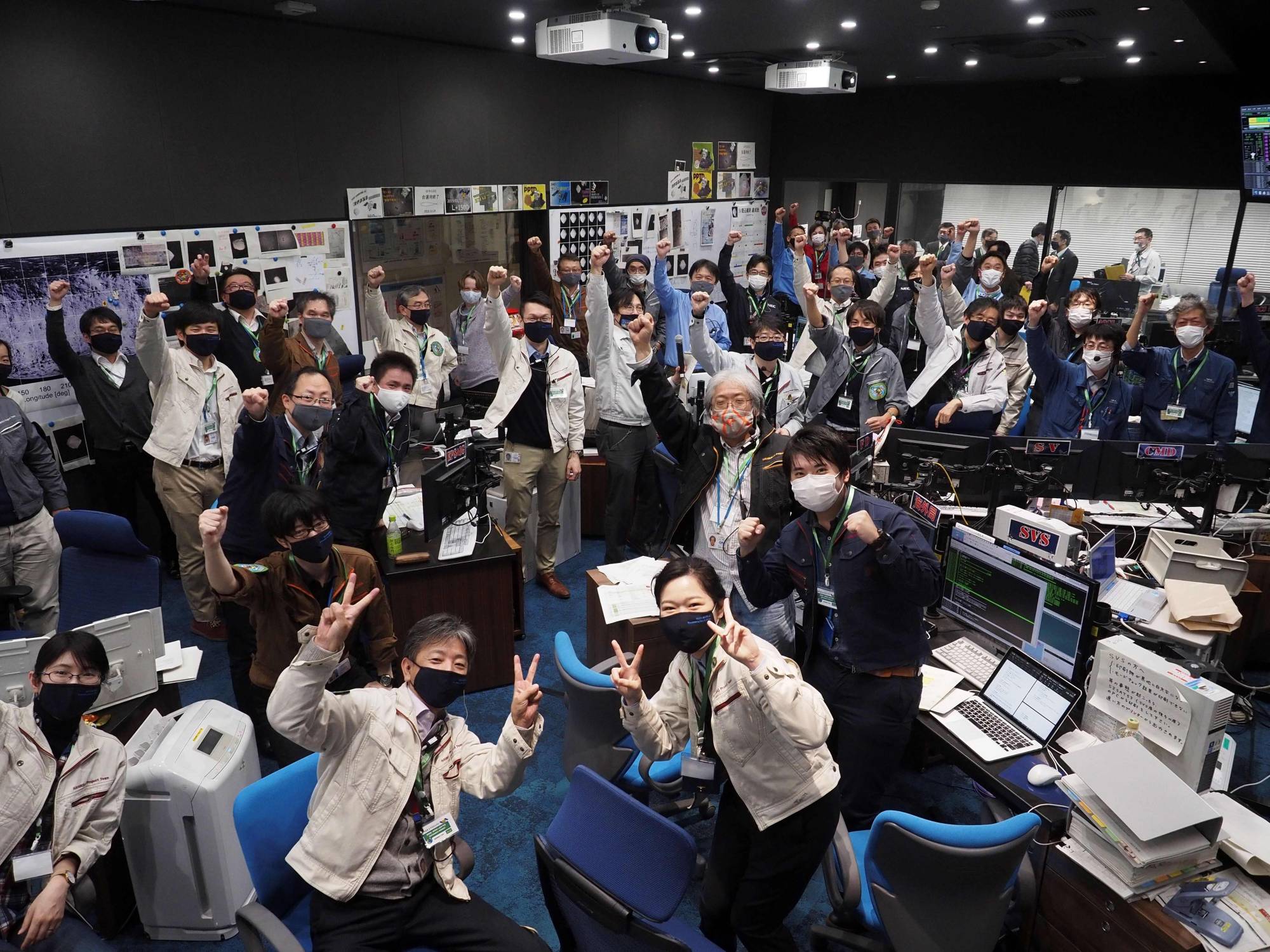 Hayabusa-2 team members celebrate in the mission control room after confirming the success of a ‘trajectory correction maneuver’ in Sagamihara, Kanagawa Prefecture, on Saturday

A few hours later, JAXA confirmed the samples had been recovered, with help from beacons emitted by the capsule as it plummeted to Earth after separating from Hayabusa2 on Saturday, while the fridge-sized probe was some 220,000 km (137,000 miles) away.

The capsule appeared as a bright fireball lasting several dozen seconds as it re-entered Earth’s atmosphere before dawn, its protective heat shield glowing as it reached temperatures of approximately 3,000 C.

In this photo provided by the Japan Aerospace Exploration Agency (JAXA), a member of JAXA retrieves a capsule dropped by Hayabusa2 in Woomera, southern Australia, on Dec. 6, 2020

“I’m extremely happy because the capsule has returned home safely, Hayabusa2 did a great job,” an elementary school boy said.

What will sample be used?

The samples were collected by Hayabusa2, which launched in 2014, from the asteroid Ryugu, some 300 million km from Earth.

The probe collected both surface dust and pristine material from below the surface that was stirred up by firing an “impactor” into the asteroid.

The material collected from the asteroid is believed to be unchanged since the time the universe was formed.

Larger celestial bodies like Earth went through radical changes including heating and solidifying, changing the composition of the materials on their surface and below.

But “when it comes to smaller planets or smaller asteroids, these substances were not melted, and therefore it is believed that substances from 4.6 billion years ago are still there,” Hayabusa2 mission manager Makoto Yoshikawa told reporters before the capsule arrived.

Scientists are especially keen to discover whether the samples contain organic matter, which could have helped seed life on Earth.

“We’ve never had materials like this before … water and organic matters will be subject to research, so this is a very valuable opportunity,” said Motoo Ito, senior researcher at the Japan Agency for Marine-Earth Science and Technology.

Half the Hayabusa2’s samples will be shared between JAXA, U.S. space agency NASA and other international organizations, and the rest kept for future study as advances are made in analytic technology.

Where will Hayabusa 2 head for

Hayabusa2 will then head toward its main target, 1998 KY26, a ball-shaped asteroid with a diameter of just 30 meters.

When the probe arrives at the asteroid in July 2031, it will be approximately 300 million km from Earth. 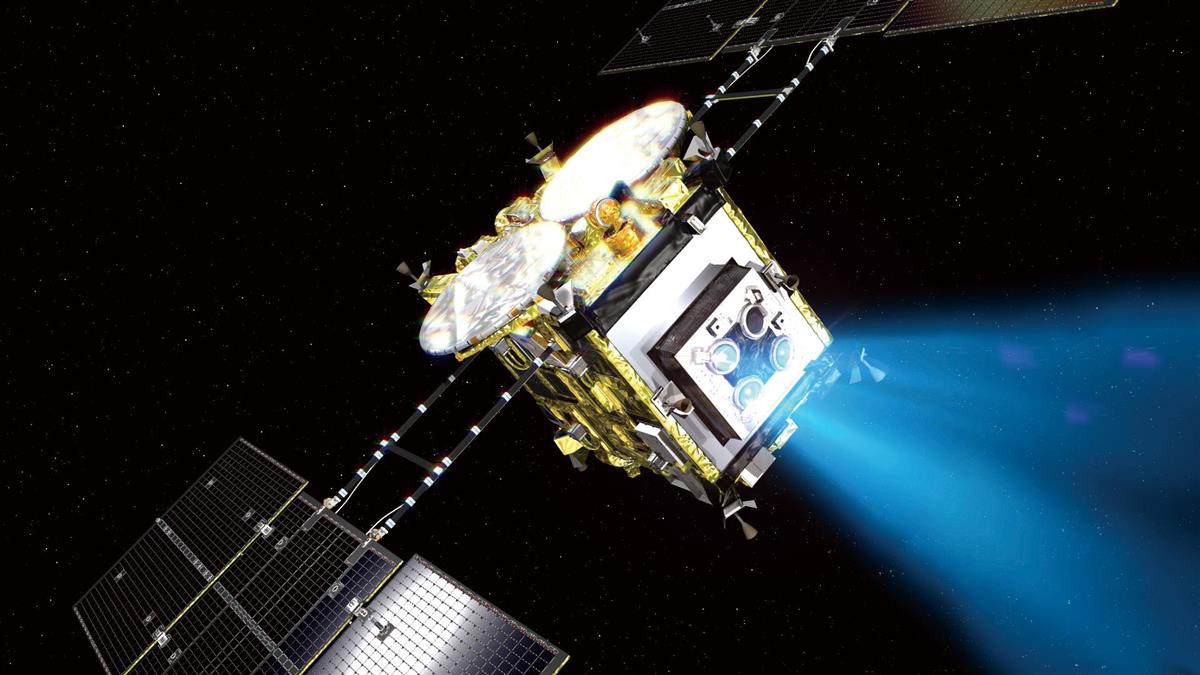 It will observe and photograph the asteroid, no easy task given that it is spinning rapidly, rotating on its axis about every 10 minutes.

But Hayabusa2 is unlikely to land and collect samples, as it probably won’t have enough fuel to return them to Earth.

Hayabusa 2 will complete its 5.2 billion-kilometer journey

and aim for another 10 billion kilometers.

The capsule of Hayabusa2 has returned from the Japanese asteroid explorer, and NASA’s Deputy Director Zabuken said on the official blog on the 5th(6th Japane time),
“It is historic to bring back precious rocks from an asteroid. (Following the first Hayabusa)
I praise and congratulate Japan for achieving it twice”.

Japan is leading the way in collecting and recovering from asteroids.

NASA succeeded in collecting rocks from an asteroid for the first time in Octover with the OSIRIS=REX spacecraft. The return is planned for 2023. 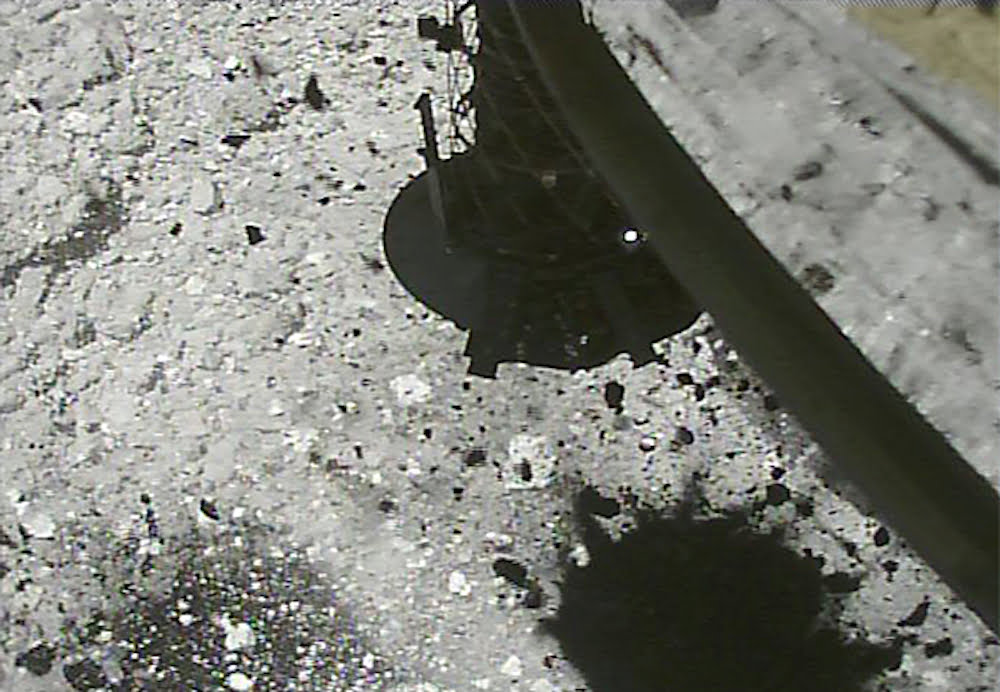 “It’s really unbelievable that mankind has been able to launcyh spacecraft from Earth, approach asteroids accurately, and land precisely to collect rocks.

It’s the result of an indomitable spirit”. He wrote it.

Finally, we have two more blogs related to Hayabusa No.1 (Hayabusa 2 (No.1), space probe lands on Ryugu asteroid, 300 million kilometers away) & No.2 (Hayabusa2 (No.2) probe makes crater on asteroid in historic first), for which thanking for visits