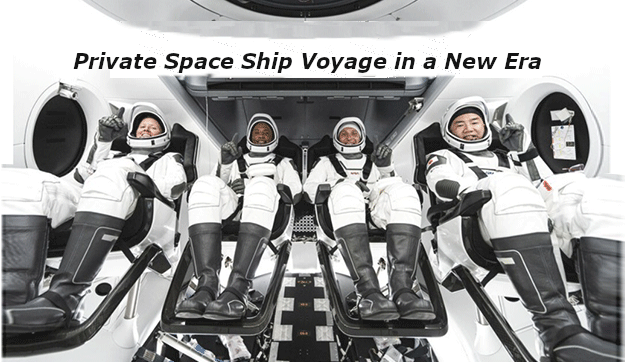 Hi everyone, how is it going?  Today’s theme is about SpaceX Crew Dragon ship carrying a Japan’s astronaut together with three American astronauts, successfully docked with ISS (The International Space Station) on Monday.

SpaceX’s newly-launched pill with 4 astronauts arrived on Tuesday (Nov17,2020) on ISS, their new house till next spring 2021. 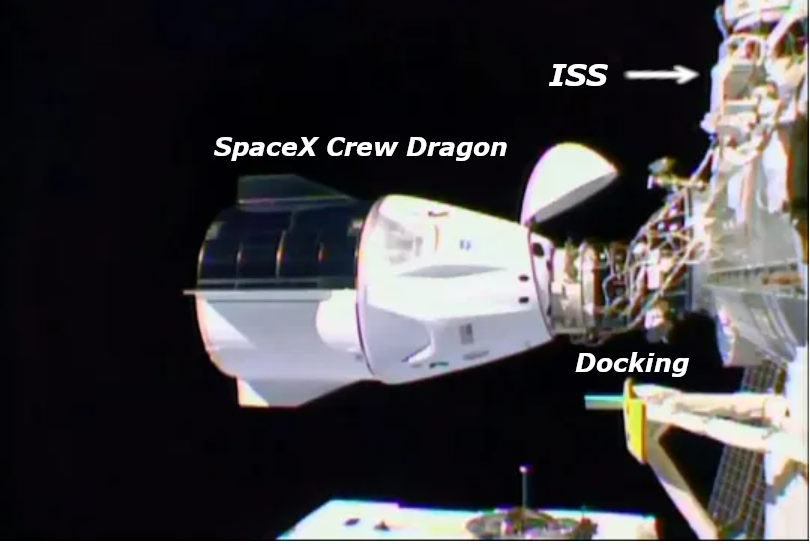 The SpaceX Crew Dragon docked to the International Space Station on November 16, 2020

The linkup took place 262 miles above Idaho. And when the team entered the ISS one by one to hold them in an embrace each other. 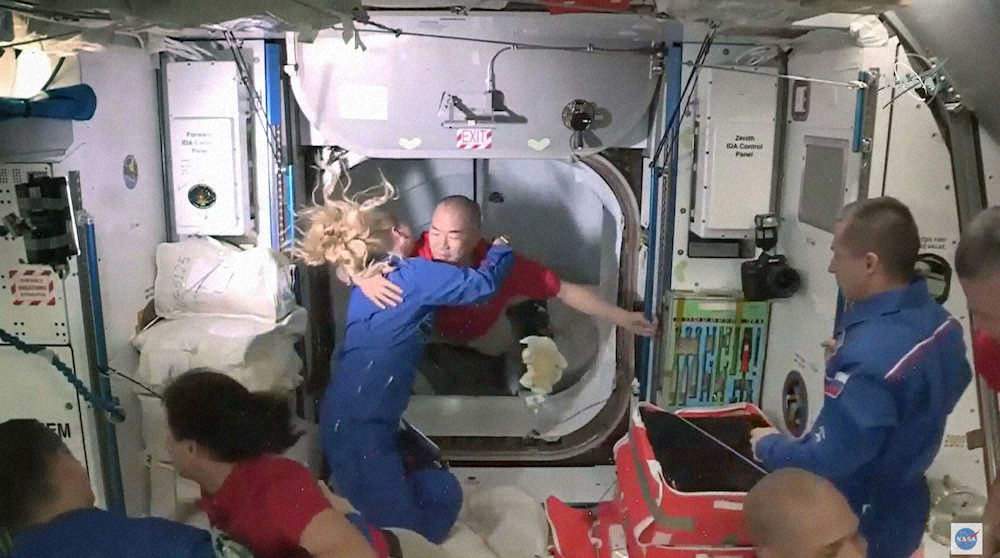 In this frame grab from NASA TV, astronaut Soichi Noguchi, background right, is greeted by astronaut Kate Rubins, as he enters the International Space Station from the vestibule between the SpaceX Dragon capsule and the ISS, early on Nov. 17, 2020. (NASA TV via AP) 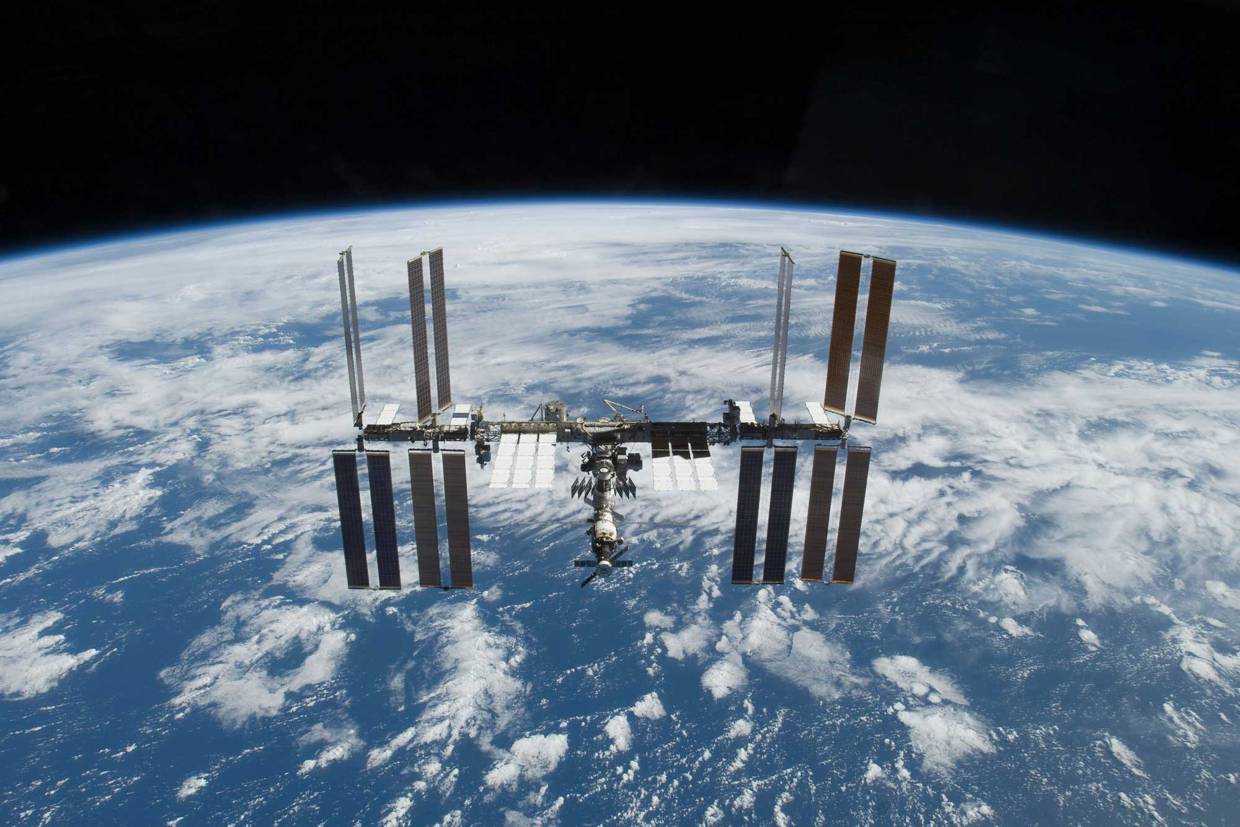 The ISS circles the Earth in roughly 93 minutes, completing 15.5 orbits per day.

The ownership and use of the space station is established by intergovernmental treaties and agreements.

The station serves as a microgravity and space environment research laboratory in which scientific research is conducted in astrobiology, astronomy, meteorology, physics, and other fields. 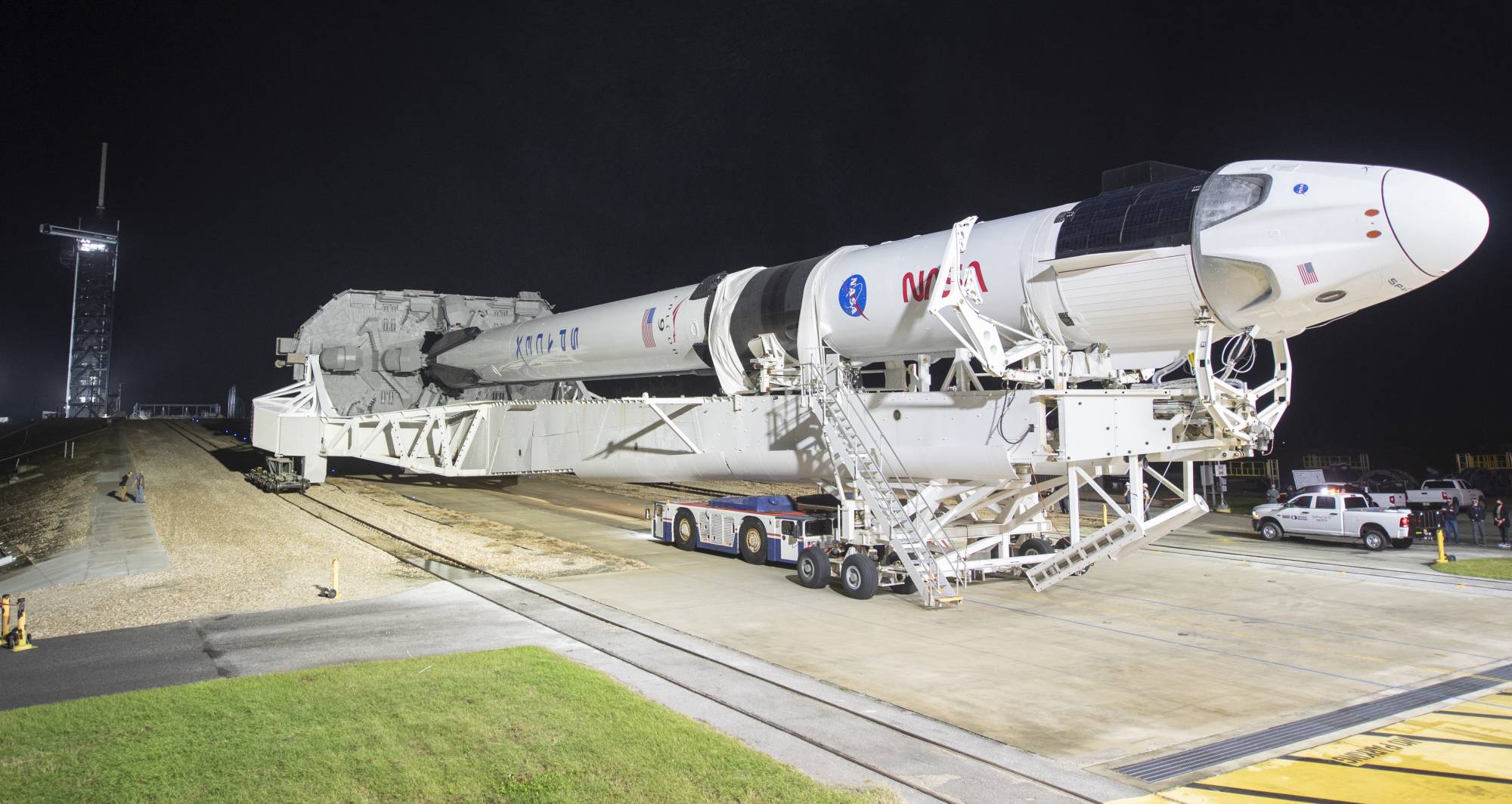 In this Monday, Nov. 9, 2020 photo provided by NASA, a SpaceX Falcon 9 rocket and Crew Dragon capsule is rolled out of the horizontal integration facility at Launch Complex

It is the largest artificial object in space and the largest satellite in low Earth orbit, regularly visible to the naked eye from Earth’s surface.

It maintains an orbit with an average altitude of 400 kilometres (250 mi) by means of reboost manoeuvres using the engines of the Zvezda Service Module or visiting spacecraft. 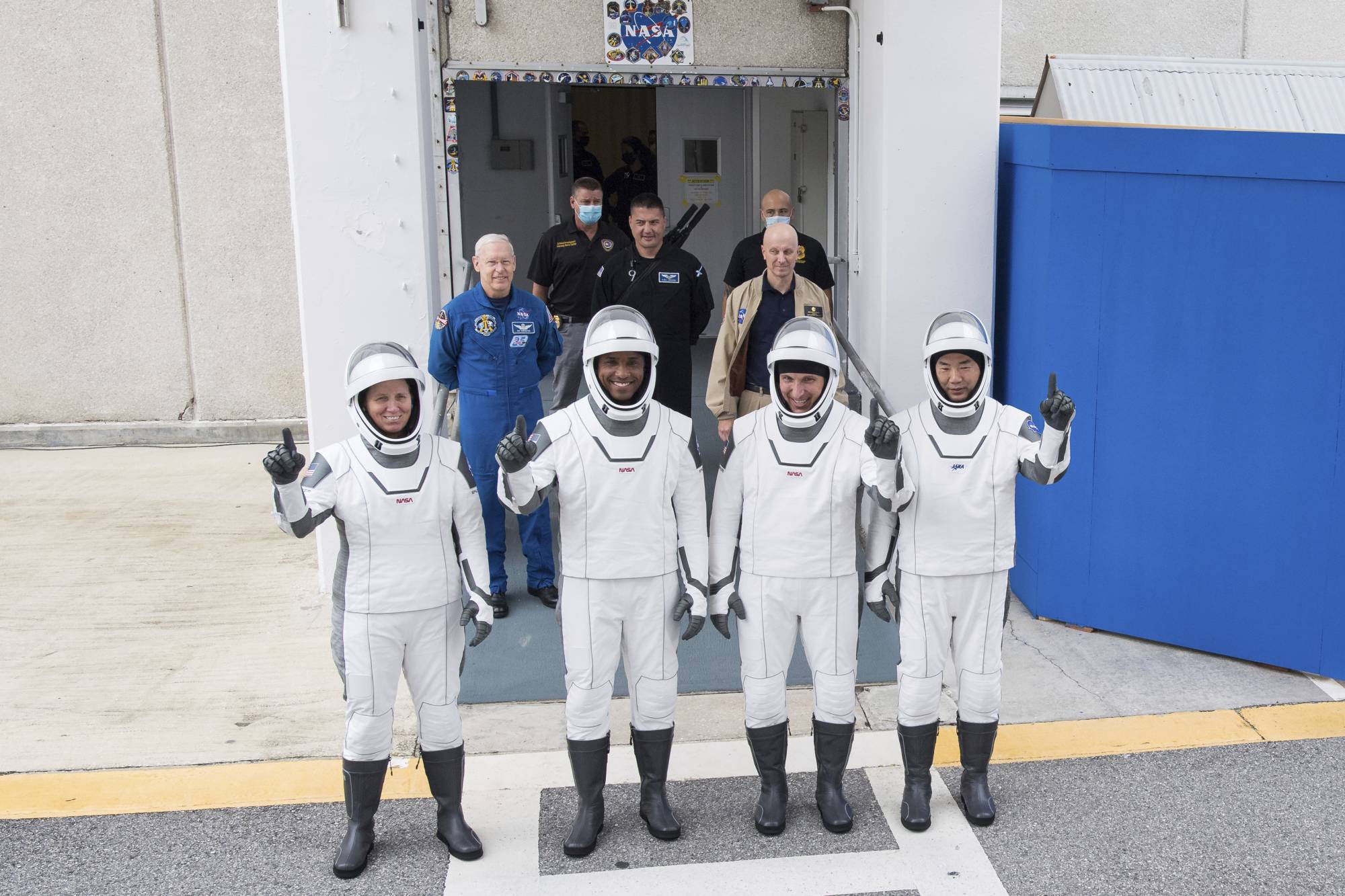 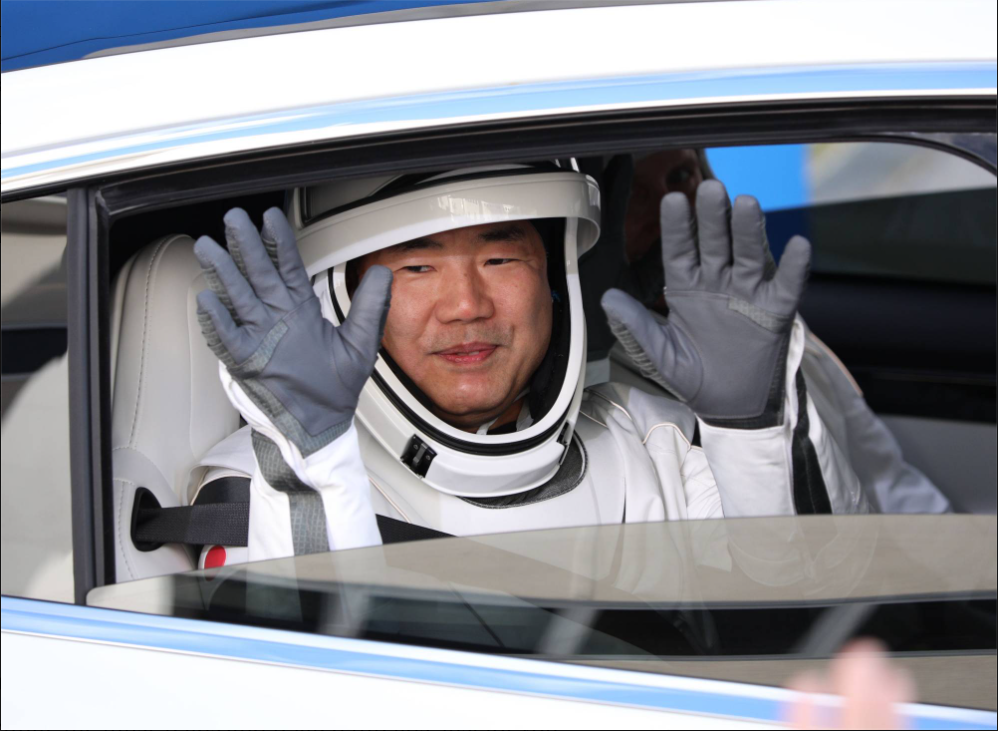 The station is serviced by a variety of visiting spacecraft: the Russian Soyuz and Progress, the U.S. Dragon and Cygnus, the Japanese H-II Transfer Vehicle, and, formerly, the European Automated Transfer Vehicle.

The Dragon spacecraft allows the return of pressurised cargo to Earth, which is used, for example, to repatriate scientific experiments for further analysis. 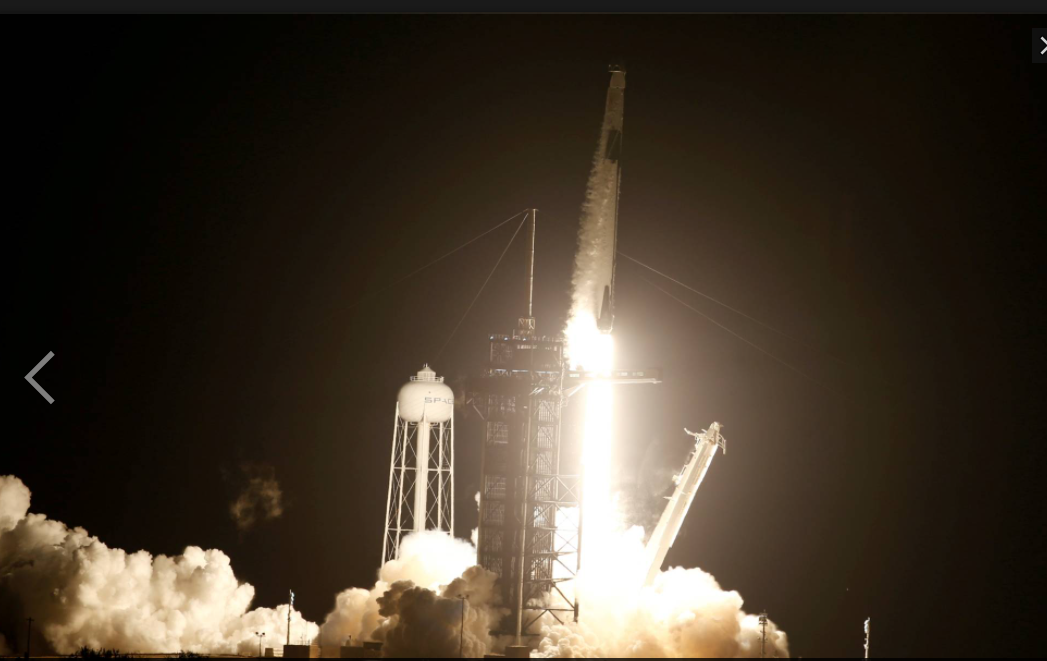 A SpaceX Falcon 9 rocket, with the Crew Dragon capsule, is launched carrying four astronauts at the Kennedy Space Center in Cape Canaveral, Florida, on Sunday. |REUTERS

As of September 2019, 239 astronauts, cosmonauts, and space tourists from 19 different nations have visited the space station, many of them multiple times.

The ISS is suited for testing the spacecraft systems and equipment required for possible future long-duration missions to the Moon and Mars.

Japan’s space agency announced that two more Japanese astronauts have been scheduled for long-term stays at the International Space Station.

The Japan Aerospace Exploration Agency, or JAXA, said on Friday that Wakata Koichi will stay at the ISS sometime around 2022, and Furukawa Satoshi around 2023.

He also said serving as a JAXA vice president enabled him to learn about the role and direction of manned space flights from a broader perspective.

He said he will make full use of his experience to achieve the best result.

Furukawa said a long time has passed since his first space mission in 2011. But he actually feels as if the time passed very quickly.

He also said he always wanted to go to space again if he had a chance, so he has kept his motivation.

Wakata is 57 years old. The next mission will be his fifth — the most number among Japanese astronauts.

Furukawa, who is 56 years old, is a medical doctor. The next space flight will be his second.

Hoshide Akihiko (below) is due to start from next year.

Finally, We pray for the safe return of the astronauts to Earth after their remarkable missions at the ISS.

At the same time, Hayabusa2 is an asteroid sample-return mission operated by the Japanese space agency, JAXA.

It surveyed the asteroid for a year and a half and took samples. It left the asteroid in November 2019 and is expected to return to Earth on 6 December 2020.

So we have two blogs about Hayabusa, “Hayabusa2 (No.1),space probe lands on Ryugu asteroid, 300 million kilometers away” and “Hayabusa2 (No.2) probe makes crater on asteroid in historic first“, both of which are well-worth browsing, thanks