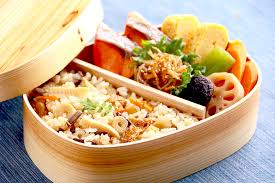 Bento (lunch box) which has been becoming the international word today, it also one of “Cool Japan”, just like Sushi, Karaoke, Judo and so on,  a Japanese-style packed lunch (= a light meal that you take to eat at work or school), usually in a special box with separate parts or containers inside it.

Hi Messrs. ＆ Mses. Japanophiles. how is it going?  I’d like to talk today about Bento, lunch box which we have various kinds of it that would probably give you a lot of enjoyment whenever luch time.

Lunchtime at a kindergarten. Each of the children has a home-made bento to tuck into. The bento is used for portable meals, usually packed in a special container. The bento is an essential part of Japanese life.

It’s early in the morning, and a mother is preparing a bento for her child. She not only fills the bento box with ingredients, but also exercises her ingenuity in creating the colour scheme and even the shapes of the items. 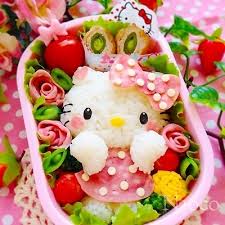 Using a cutter in the shape of a cherry blossom, you can cut kamaboko fish paste or ham into petal-shaped pieces. Arranged over rice, this gives a bento the perfect springtime accent.

This bento has been created for lunch at a school sports day to encourage a child to do their best in the relay race. The faces are made of ham, and the hats are composed of carrot and fried egg while.

The bento has become a medium of communication, a way for the creator to express their feelings for the person who will eat it. 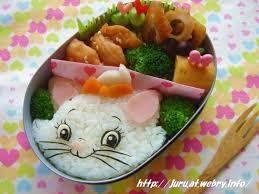 Not all bento are home-made. Many shops sell them. Convenience store chains are constantly developing new varieties, and often see a significant spike in the number of customers when they come up with a bento that’s particularly popular. 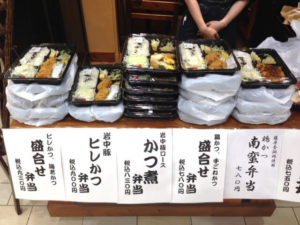 The bento sold at train stations are called ekiben. Each area-and even each individual station-is likely to have its own speciality. Often the packaging, and the container itself, will have a distinctive design.

This one is shaped like a Shinkansen bullet train. It’s filled with items that appeal to children, such as spaghetti and mini hamburger patties.

There’s plenty of pork meat in this bento-and it’s sold in a pig-shaped container. It comes with a lid that has a slot in it, so when you’ve eaten the food, it has another use-as a piggy bank.

Bento originated as simple packed meals such as rice balls carried by travellers. But over the centuries, they became more and more elaborate. 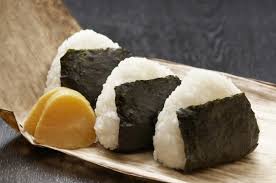 This is what a bento for a blossom-viewing party would have looked like during the Edo period. It contains a variety of foods that were considered luxuries in those days.

Recently, some high-class restaurants have begun offering meals in a single container, such as a basket. They are also called “bento” because they reflect the basic concept of filling a container with various delicious ingredients. 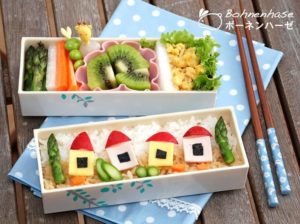 Bento continue to develop. They have become “edible canvases” that showcase the skills and imagination of their creators.