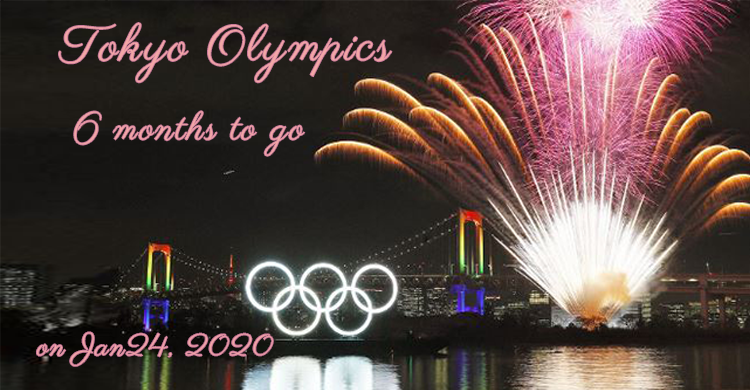 Hi  Messrs. ＆ Mses. Japanophiles.  how are you doing?   Today (Jan24, 2020)、we have the long-awaited Tokyo Olympics will come in six months. So I’d like to report the present situation of the big events will be held in six months. 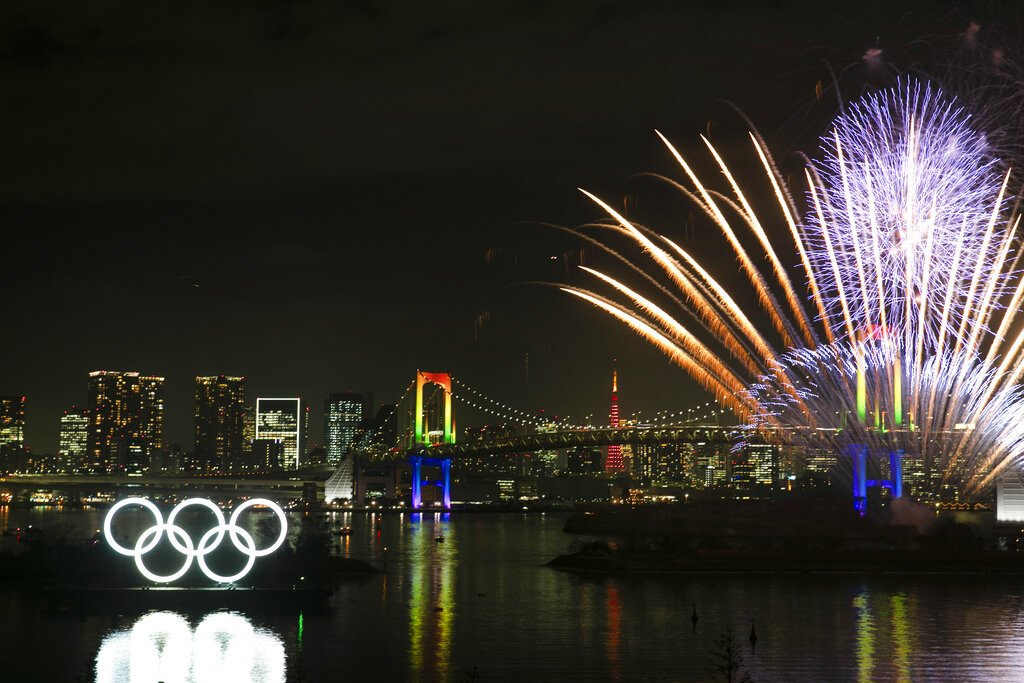 Tokyo put on a flashy fireworks display on Friday to mark the 6-months-to-go milestone for this year’s Olympics. 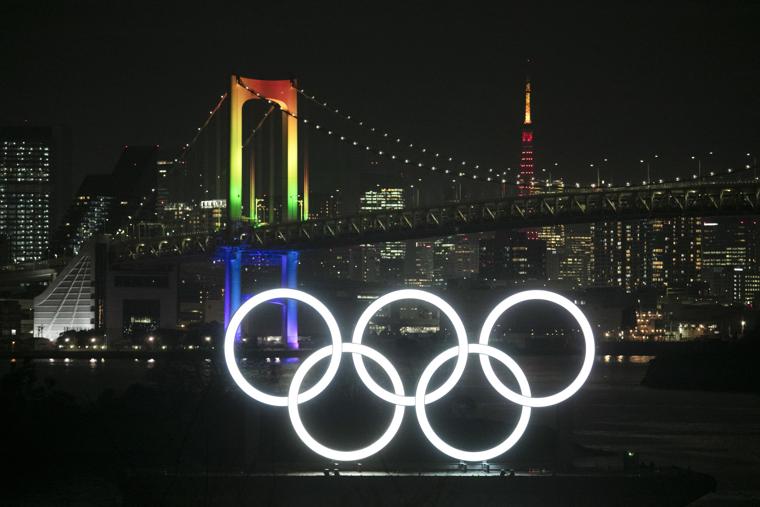 The show took place high above a barge stationed in Tokyo Bay that supports a massive replica of the five Olympic rings, a reminder the games are almost here.

Fireworks explode and the Olympic rings are lit up on the waterfront at Tokyo’s Odaiba Marine Park on Jan. 24, 2020, exactly six months before the start of the Olympics.

Japan residents needed to enjoy the fireworks. These may be the last for awhile.

Tokyo Olympics are unprecedented cases in many aspects.

More than 70 summer festivals across Japan featuring traditional fireworks shows have been canceled or have changed their dates.

The Associated Press counted at least 56 festivals that said the Tokyo Games were the reason for the move, citing a shortage of police and security guards that have been assigned instead to the Olympics and Paralympics.

The summer fireworks festivals share a special place in Japanese culture, much like July 4th celebrations across the United States.

Tokyo has brought forward several of its festivals, including the massive display on the Sumida river.

The city of Saitama, north of Tokyo, has decided to cancel its 150-year-old fireworks festival because it conflicts with Olympic golf.

And in Kamakura, known for its giant Buddha statue, July fireworks are off because logistics clash with Olympic sailing.

“Assuming there is no disaster with the heat or so forth, the Olympics will be well-handled,” David Leheny, a political scientist at Waseda University in Tokyo, said in an interview with the AP.

“They are not going to be any worse in terms of the chaos of getting from place to place than most Olympics.

They will probably be handled better in a lot of ways. And Japan can be charming.” 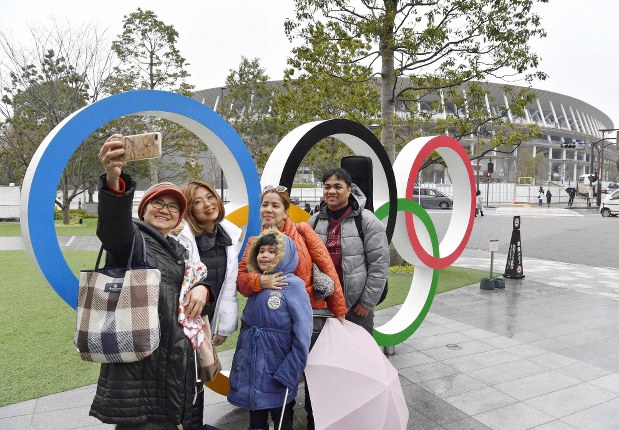 The host city has spent more than ¥1.37 trillion ($12.5 billion) on preparations for the 2020 Games, according to an annual budget plan released Friday by the Tokyo Metropolitan Government.

The International Olympic Committee has spent more than ¥600 billion and the central government ¥150 billion.

What’s a developed country like Japan getting for its money?

“Japan risks getting eclipsed if all people talk about is both the rise of China, and Japan being stuck in its two or three lost decades,” Leheny said.

“This is an opportunity to host the Olympics and showcase a Japan that puts on a first-rate show.

To represent Japan as a place that is technologically savvy, but culturally distinctive and filled with creative people.”

The other mission is to convince the world that Fukushima prefecture has recovered. The area, roughly 250 kilometers (150 miles) northeast of Tokyo, was devastated by the 2011 earthquake, tsunami and the meltdown of three nuclear reactors. Thousands still struggle, many in temporary housing.

There is resentment in the northern prefecture, and in neighboring prefectures, that some of the billions spent on the Olympics could have aided recovery. Some residents fear the Olympics will be used to draw a line under the disaster.

“There is a sense that once the Olympics are over, Japan can start cutting off subsidies to those hurt by the disaster,” Leheny said.

On Friday, the Japan Coast Guard conducted an anti-terrorism drill on a passenger boat at Tokyo’s Takeshiba Pier, as many of the venues are located near the waterfront.

Growing concern over the weather came to a head in October when the IOC made a unilateral decision to move the marathon and race walking events to Sapporo, where the temperature is typically about 5 to 6 degrees cooler than in Tokyo in late July and early August.

Two weeks later, Koike, who was apparently blindsided by the sudden announcement, reluctantly agreed to support the decision.

Water in Tokyo Bay where the triathlon and marathon swimming will be held is also very warm — about 30 degrees C (86 degrees F) and right at the limit set by swimming governing body FINA.

Preparations for the 2020 Games have been plagued from the start by concerns about Tokyo’s infamous summer heat and the impact it might have on athletes, volunteers, staff and spectators.

Free ice cream, artificial snow, giant mist machines and trees strategically planted to create shade are just a few items on a growing list of countermeasures being devised in the run-up to the opening ceremony on July 24.

The 1964 Games were held in October to avoid this issue. This time around, however, it will be held in the middle of summer due to pressure from Western media outlets.

Greater Tokyo’s rail system if famously efficient and is the best way to get around the urban area of 35 million. But expect it to be stressed during the Olympics.

Professor Azuma Taguchi at Chuo University said the system is already running at twice capacity and the Olympics could be the breaking point.

Taguchi’s study predicts 15 stations will experience greater than 200% capacity, and some will reach 400% at peak hours. Some railways have designated special oshiya, or “pushers,” to pack commuters into rush hour cars — often wearing white gloves.

Tickets for the relocated marathon and race walking events are not yet available since preparations had to begin from scratch, but nearly all other events for the 2020 Games have been met with unprecedented interest from the public.

So far about 4.4 million tickets for the Olympic Games have been sold to Japanese residents, with the number of applications during the first lottery totaling 16 times the number of tickets available, according to organizers.

Domestic demand has also outnumbered supply for the Paralympic Games, which will begin Aug. 25.

More than 3 million ticket requests were made during the first lottery and just over 600,000 were sold. The second lottery began on Jan. 15.

Tsunekazu Takeda stepped down 10 months ago as the head the Japanese Olympic Committee amid a vote-buying scandal that French investigators suspect helped Tokyo land the Olympics.

Takeda acknowledged he signed off on about $2 million in payments to a Singapore consulting company, Black Tidings, and its head Ian Tan Tong Han.

The payments came just before Tokyo was picked in 2013 by the IOC. French investigators have linked Black Tidings to Papa Massata Diack, one of the sons of powerful former IOC member Lamine Diack of Senegal. Lamine Diack was known to have influence over Olympic voters in Africa.

Russia is facing a four-year Olympic ban for manipulating doping data. It has appealed to the Court of Arbitration for Sport and a ruling is expected in several months.

The sanctions imposed by the World Anti-Doping Agency forbid the use of the Russia team name, flag or anthem.

However, some Russians are still expected to compete as neutral athletes in Tokyo — as they did at the 2018 Winter Olympics in Pyeongchang. No one knows how many.

With the government hoping to attract a record 40 million visitors to Japan this year, Tokyo is addressing every front, from building new venues and training 80,000 volunteers to strengthening cybersecurity and improving accessibility for people who don’t speak Japanese and those with disabilities.

And the recent spread of a new coronavirus in China has raised concerns of an outbreak during the Olympics.

“A majority of the large construction projects for the 2020 Games have been completed,” Koike said during a news conference on Friday.

“As we finalize preparations, including protection against infectious diseases, we need to prepare for the unexpected.”

A total of 43 venues will be used during the 2020 Olympic Games. Construction at all but one of the eight new venues built by the metropolitan government is complete.

And the $1.43 billion national stadium by Kengo Kuma is a jewel. It’s green and wood exterior feels like it’s been there forever, promising to be the centerpiece — much the way Kenzo Tange’s Yoyogi Gymnasium was for the 1964 Tokyo Olympics.

Finally, we have “On Dec 15, Ceremony for Open of New National Stadium for 2020 Tokyo Games” to be well worth browsing, thanks