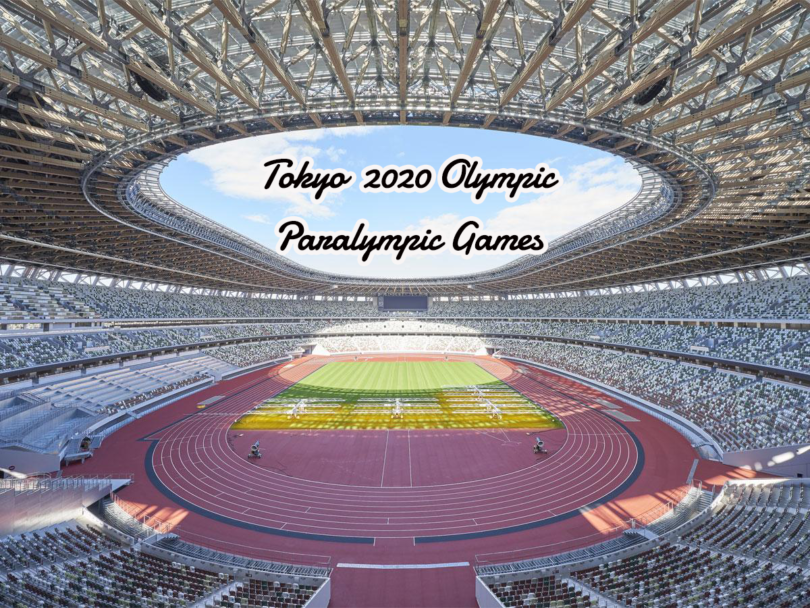 Hi  Messrs. ＆ Mses. Japanophiles.  how are you? Today’s topic is “Completion Ceremony for New National Stadium for 2020 Tokyo Games”.

With just over seven months to go before the start of the 2020 Tokyo Olympics, a ceremony on Dec. 15 at the new National Stadium offered a sneak preview of the main venue for the sports extravaganza. 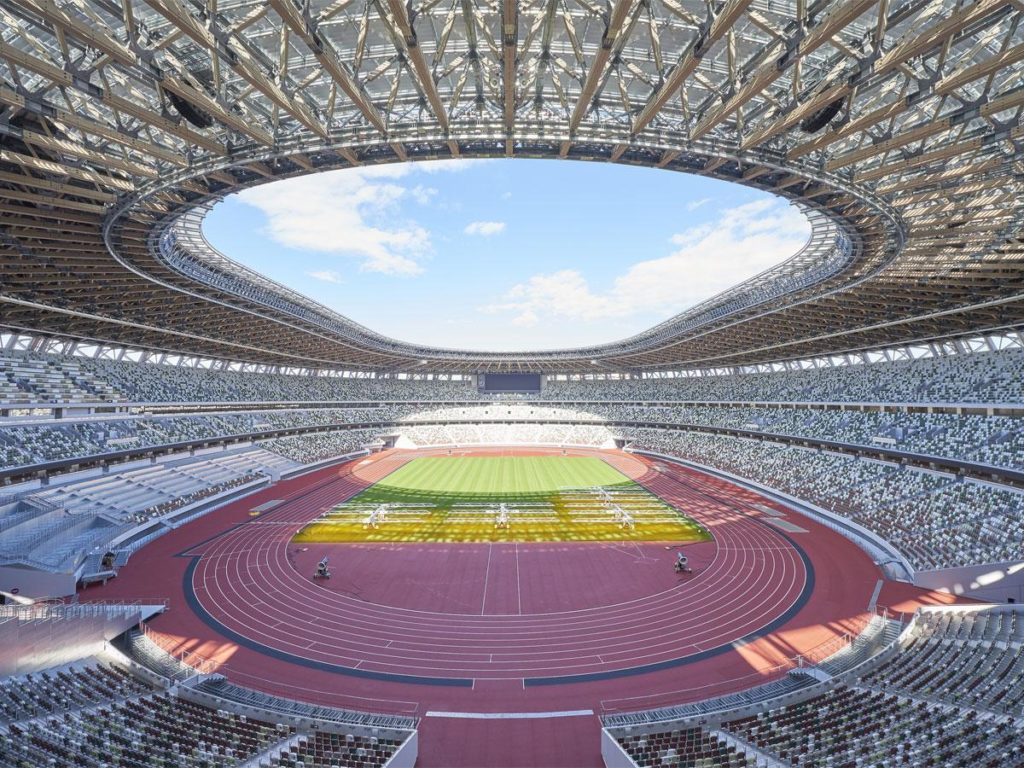 Tokyo Governor Yuriko Koike and architect Kengo Kuma were in attendance at the event to mark the stadium’s completion, along with Prime Minister Shinzo Abe and other officials.

Prime Minister Shinzo Abe spoke at Sunday’s official completion of the new national stadium, the venue for the opening and closing ceremony of next year’s Tokyo Olympics. It will also host track and field and some soccer.

The roof of the new National Stadium is seen from the track through a fish-eye lens in Tokyo’s Shinjuku Ward on Dec. 15, 2019

“It blends with its surrounding and the natural environment,” Abe said, noting it showcased Japan’s ties to nature with its use of wood lattice work around the stadium’s rim and roof, and earth-tone colors in the seats that are randomly colored brown, gray, two shades of green and white.

The stadium, in the capital’s Shinjuku Ward, will be unveiled to the public for the first time on Dec. 21, when a gala celebrating the completion will be held.

Usain Bolt, the transcendent Jamaican sprinter who captured eight medals in three Olympics, will take part in a relay in the celebratory event, while men’s pop idol group Arashi is also expected to perform.

The stadium will make its debut as a venue for sports events on Jan. 1, when the Emperor’s Cup, the final of the Japan Football Championship, will be held.

The interior of the new National Stadium is seen at night in Tokyo’s Shinjuku Ward on Dec. 15, 2019.

Construction of the stadium began in December 2016 after its predecessor, which served as the main venue of the 1964 Olympics in the same location, was dismantled to make way for the new facility.

The five-story stadium, standing about 47 meters tall, was completed on Nov. 30. It has a two-story basement and a total floor space of 192,000 square meters, about 3.7 times that of its predecessor.

It will have a seating capacity of about 68,000 spectators during the Games and can be expanded later to 80,000.

The woodland-themed stadium is designed to let the breeze in to allow for improved air circulation and its beams include lumber harvested from all 47 prefectures, including Tokyo.

The exterior of the new National Stadium is seen at night in Tokyo’s Shinjuku Ward on Dec. 15, 2019.

A total of 156.9 billion yen ($1.43 billion) was spent on construction of the stadium and related work in the neighborhood.

Tokyo Governor Yuriko Koike pointed out the other strong feature as she spoke;

“This stadium uses a lot of trees in its structure,” she said, speaking of the greenery that is everywhere — from flower planters, to trees and shrubs.

Although Tokyo is densely urban, it is also dotted with many parks and green areas. The stadium works off that theme, making sure it is functional and linked to nature.

A walkway on the fifth level is called the “Grove of the Sky.” It’s about 30 meters (100 feet) above street level and runs 850 meters (1/2 mile) around the entire circumference of the stadium.

Buildings in the Shinjuku district are seen from the fifth floor of the new National Stadium, rebuilt for the 2020 Tokyo Olympics and Paralympics, in the capital’s Shinjuku Ward on Dec. 15, 2019

It’s lined with benches, flowers and trees. A stroll offers a breathtaking view of Tokyo, and on a clear day Mt. Fuji is visible to the west.

Makoto Sato, a spokesman for the Japan Sport Council, a national government body that built the venue, said the walkway will be open to the public on days when there are no events after the Olympics.

“We have tried to emphasize all four seasons and people can use it around the year and enjoy it,” he said.

The stadium seating rises in a steep gradient from the field level and the nine-lane track, getting steeper the higher it goes.

The colors of the seats also get lighter the higher up you go with more brown seats near the bottom — the earth — and more green, gray and white near the top.

“Because of the gradient, it creates an atmosphere where people can feel close,” said Takeo Takahashi, another Japan Sport Council spokesman.

Tokyo’s 1964 Olympics left behind several architectural jewels, the most famous of which was Kenzo Tange’s Yoyogi National Stadium. It was the swimming venue in ’64 — American swimmer Don Schollander won four gold medals there — and will host handball this time, and badminton and wheelchair rugby at the Paralympics. 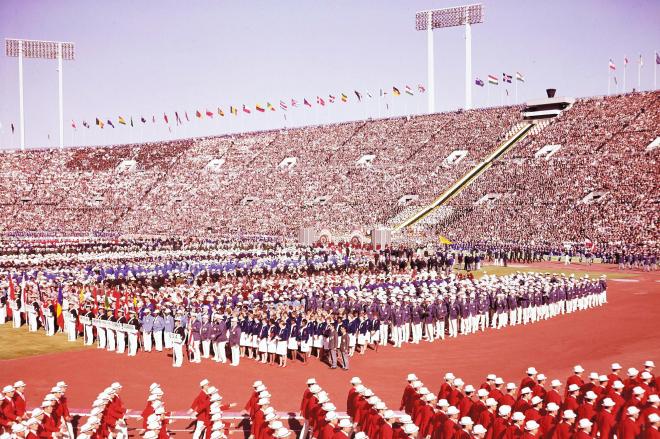 The new stadium also feature items from the old national stadium, which was razed in 2015. The most prominent are two mosaic-tile murals featuring the Greek goddess Nike and Nomino Sukune, a legendary sumo wrestler. They are located at the Aoyama Gate entrance.

“I can already envision the scene where the athletes are sprinting on this field and spectators are cheering for them in this stadium,” she said.

The new National Stadium is seen lit up from a helicopter with Mount Fuji in the background on Dec. 15, 2019.

Finally, we have “Tokyo Olympics reach 6-months-to-go mark with welcoming fireworks” being well-worth visiting, thanks