Hi everyone how are you doing?   Today’s theme is ” Obon (Festival of the dead) ” which takes place around the 15th of August.

Obon that is one of the biggest annual events in many parts of the country, which is from August 13th to 15th, however, it’s terribly pity that almost all festivals have to be canceled due to strong typhoon attacked the Japan islands in 2019.

Obon is an annual Buddhist event for commemorating one’s ancestors. It is believed that each year during obon, the ancestors’ spirits return to this world in order to visit their relatives.

Traditionally, lanterns are hung in front of houses to guide the ancestors’ spirits, obon dances (bon odori) are performed, graves are visited and food offerings are made at house altars and temples.

Obon is observed from the 13th to the 15th day of the 7th month of the year, which is July according to the solar calendar.

However, since the 7th month of the year roughly coincides with August rather than July according to the formerly used lunar calendar, Obon is still mainly observed in mid August, although in some areas it is also observed in mid July.

The Obon week in mid August is one of Japan’s three major holiday seasons (alongside New Year and Golden Week), accompanied by intensive domestic and international travel activities and increased accommodation rates.

In recent years, travel activitiy in mid August has become somewhat more spread out and less concentrated, but it is still considerable on certain days.

Tōrō nagashi is a Japanese ceremony in which participants float paper lanterns down a river; tōrō is a word for “lantern,” while nagashi means “cruise” or “flow.”

At the end of Obon, therefore, floating lanterns are put into rivers, lakes and seas in order to guide the spirits back into their world. The customs followed vary strongly from region to region.

This activity is traditionally performed on the final evening of the Bon Festival in the belief that it will help to guide the souls of the departed to the spirit world. 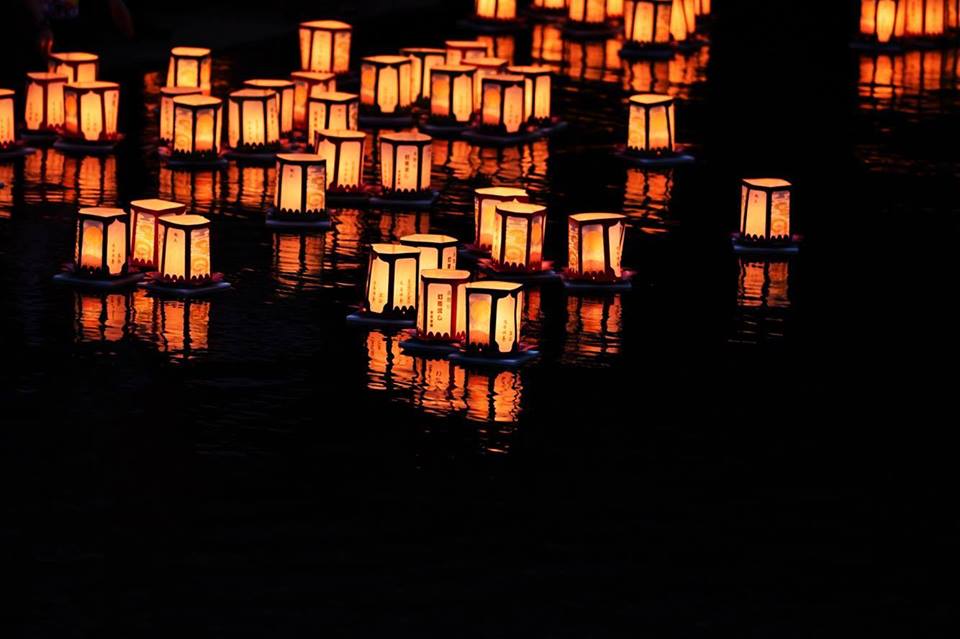 The ceremony may take place on other days of the year for such reasons as the commemoration of those lost in the bombing of Hiroshima and those who died on Japan Airlines Flight 123.

It is also performed in other regions of the world, such as Hawaii, to commemorate the end of World War II.

The Bon Festival takes place on the thirteenth to fifteenth (but some place,sixteenth) of August or July, depending on the calendar used mentioned before.

Traditional Japanese beliefs state that humans come from water, so the lanterns represent their bodies returning to water and in particular to the sea. White paper lanterns are used to represent those who died in the past year.

Every year in August, the city of Tokushima, Tokuhshima Prefecture on the island of Shikoku becomes one big dance floor, as 10,000 people dance through the streets.

Called Awa Odori, this is one of Japan’s annual Obon events to honour the spirits of ancesotors.

The ritual which Awa Odori is based on is still practised in a fishing community in Tokushima.
Those who have lost a family member within the past year gather at the port.
This straw doll is said to act as a magnet for the souls of the departed.

People believe that facing the sea and calling out the names of the dead will bring their souls back to this world.

Then lively festival music is played. The participants form a circle and start dancing.  This dance expresses the joy of having the ancestral spirits back for brief while. 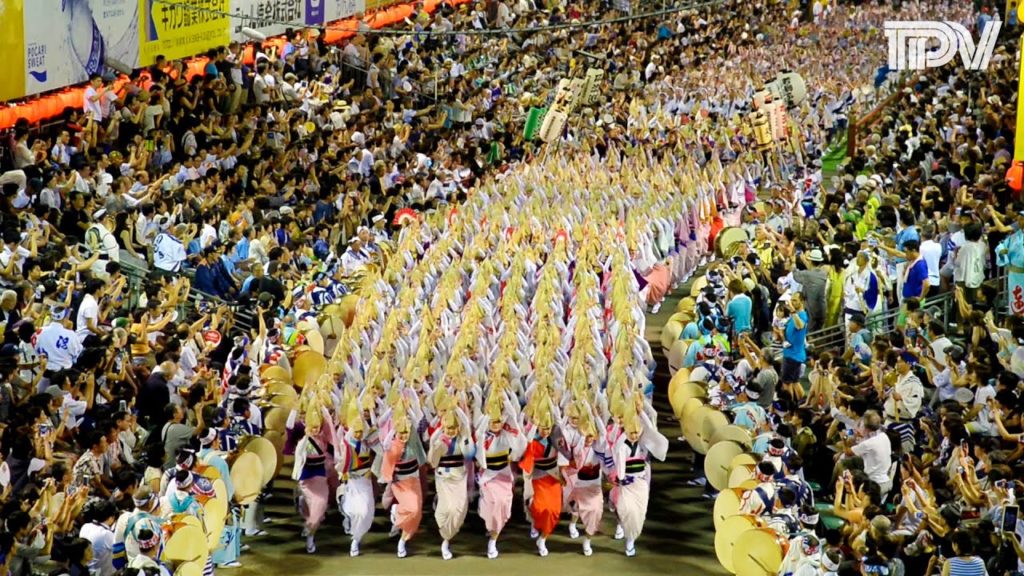 There are various regional customs associated with it.

On the first day of Obon, small fires are lit at the entrances to homes. This is done to help the ancestral spirits find their way home. 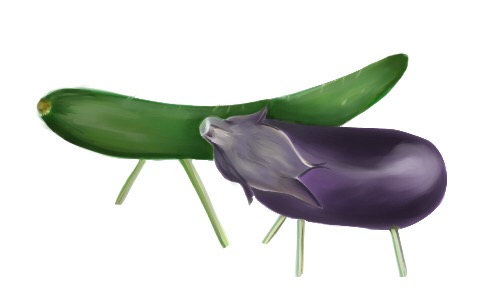 A special table is set up for the spirits, and offerings of food and drink are placed on it. It’s customary to treat the spirits as if they were still alive.

On the last day of Obon-August the 16th, fires are lit to send the spirits back to the world of the dead. One of the grandest send-off displays is Kyoto’s Gozan no Okuribi.

The sticks of firewood used for the bonfires are offerings on which people have written messages to their ancestors.

Torchbearers climb up the hillsides carrying torches blessed by Buddhist priests, and light one pile of firewood after another.

Here, we see an ideogram on the hillside-bright and magnificent. These bonfires are thought to help guide the spirits back to their world. 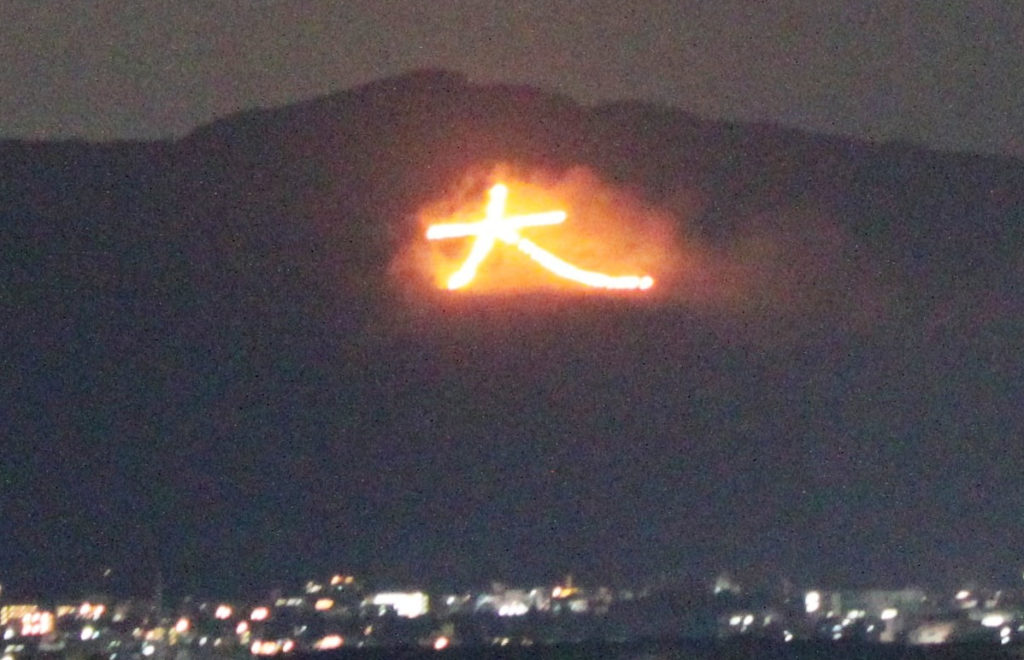 These events and proctices related to Obon provide a glimpse into the Japanese outlook on life and death, which is base on the notion that people should alway give a warm welcome to the spirit of the deceased. 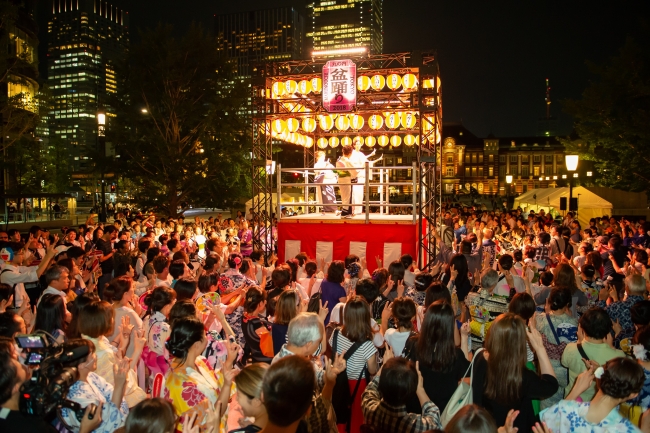