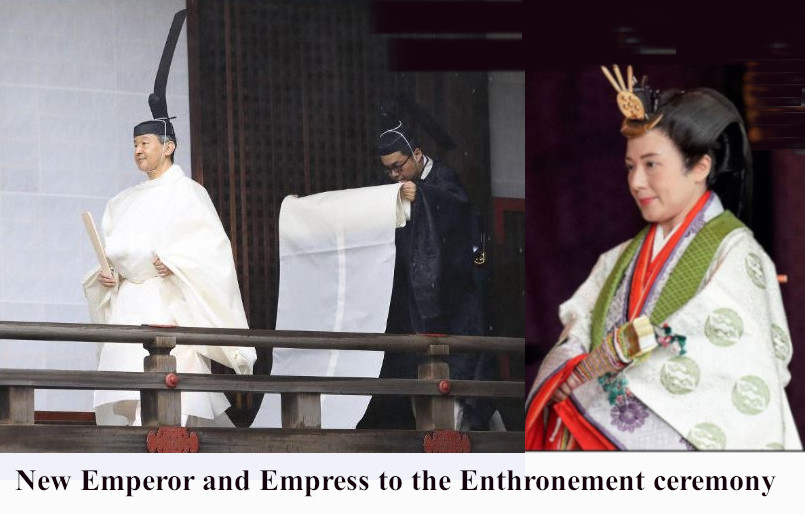 Hello everone, how are you? I am happy to inform you of felicitation “the Day of the Enthronement Ceremony”.

Japanese Emperor Naruhito officially proclaimed Tuesday (on Oct 22, 2019) his enthronement before roughly 2,000 guests, including some 420 dignitaries from about 190 countries and international organizations, in a ceremony at the Imperial Palace featuring elements of ancient protocol.

“I pledge hereby that I shall act according to the Constitution and fulfill my responsibility as the symbol of the state and of the unity of the people of Japan,” said the 59-year-old emperor as he unfolded a script and read it out from inside the 6.5-meter-high canopied Takamikura imperial throne.

Emperor Naruhito delivers the speech proclaiming his enthronement from the takamikura imperial throne Tuesday at the Imperial Palace in Tokyo.

In the ceremony, equivalent to a coronation, which lasted about 30 minutes, the 126th emperor in the world’s oldest hereditary monarchy added, he always wishes for “the happiness of the people and the peace of the world, turning my thoughts to the people and standing by them.”

He was clad in a “Korozen no goho,” a dark-orange robe with a design dating back to the ninth century that emperors wear on special occasions. 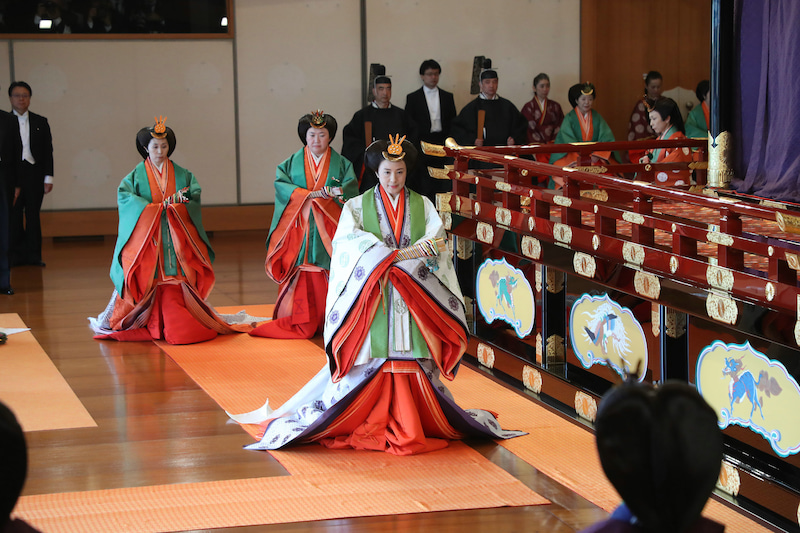 In the rite dating back more than 1,000 years, which was held half a year after the emperor’s ascension to the throne, Prime Minister Shinzo Abe conveyed felicitations from the floor of the “Matsu-no-Ma” stateroom at the Seiden State Hall. 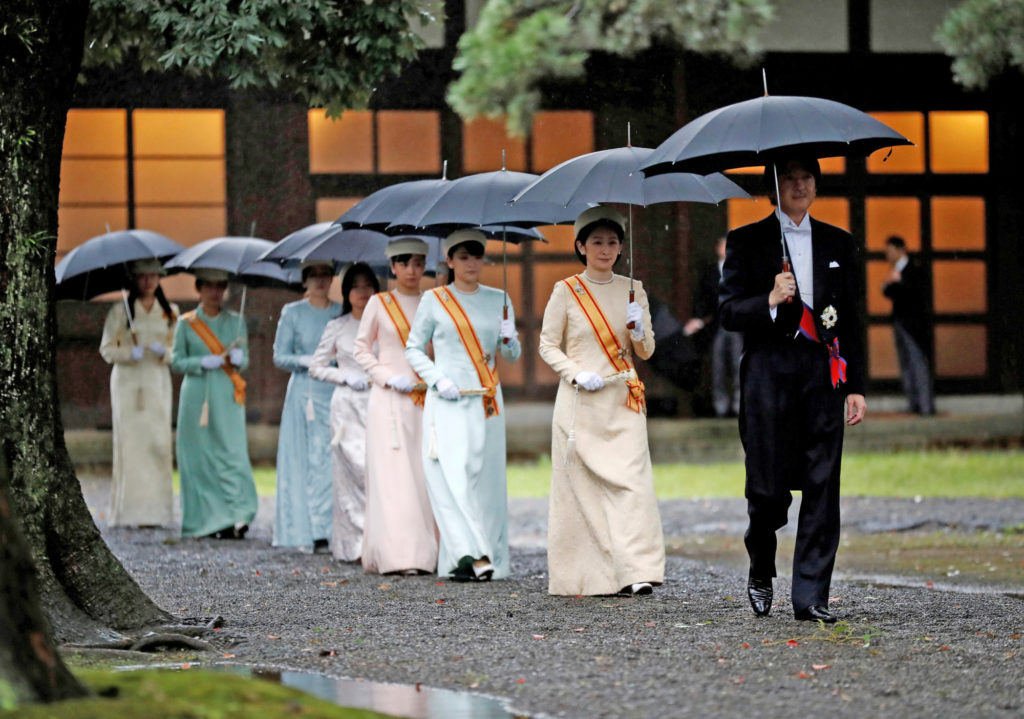 Prime Minister Shinzo Abe offered congratulations in response to the emperor’s speech, saying, “We, the people, look up to His Majesty the Emperor as the symbol of Japan and the unity of its people, and, with a renewed spirit, will put our best efforts into creating an era where new culture will flourish as a peaceful, hopeful and proud Japan realizes a bright future and the people come together in beautiful harmony.”

He then led the guests in a banzai salute before the emperor and empress exited the chamber. 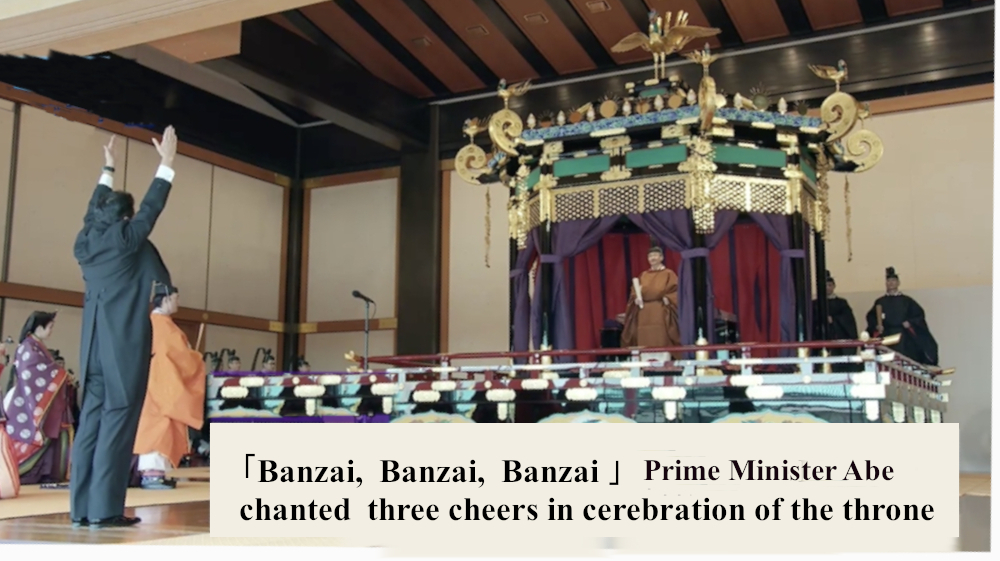 In this handout picture released by Japanese Government on October 22, 2019 Prime Minister Shinzo Abe (L) shouts banzai cheer for Emperor Naruhito (Centre-L) and Empress Masako (Centre-R) during the enthronement ceremony where emperor officially proclaimed his ascension to the Chrysanthemum Throne at the Imperial Palace in Tokyo on October 22, 2019. – Japan’s new Emperor Naruhito completed his ascension to the ancient Chrysanthemum throne in a solemn, ritual-bound ceremony performed before hundreds of dignitaries in the Imperial Palace.

Guests make banzai cheers during the enthronement ceremony of Japanese Emperor Naruhito proclaiming his enthronement at the Imperial Palace. The Sokuirei-Seiden-no-Gi is the official proclamation ceremony by Naruhito announcing to domestic and foreign audiences that he had ascended the Chrysanthemum Throne.

Heavy rain in the morning prompted the Imperial Household Agency to reduce the number of ceremonial officials in traditional Japanese attire and move them inside to the corridor from the courtyard, where more than 70 were originally scheduled to line up carrying swords and bows. But the rain stopped once the ceremony started.

Two of the three items of imperial regalia — the sword and jewel — which the emperor inherited in May as proof of his ascension to the throne, were placed at the Takamikura throne at the ceremony along with the state and privy seals. A 21-gun salute was offered at the end by the Ground Self-Defense Force. 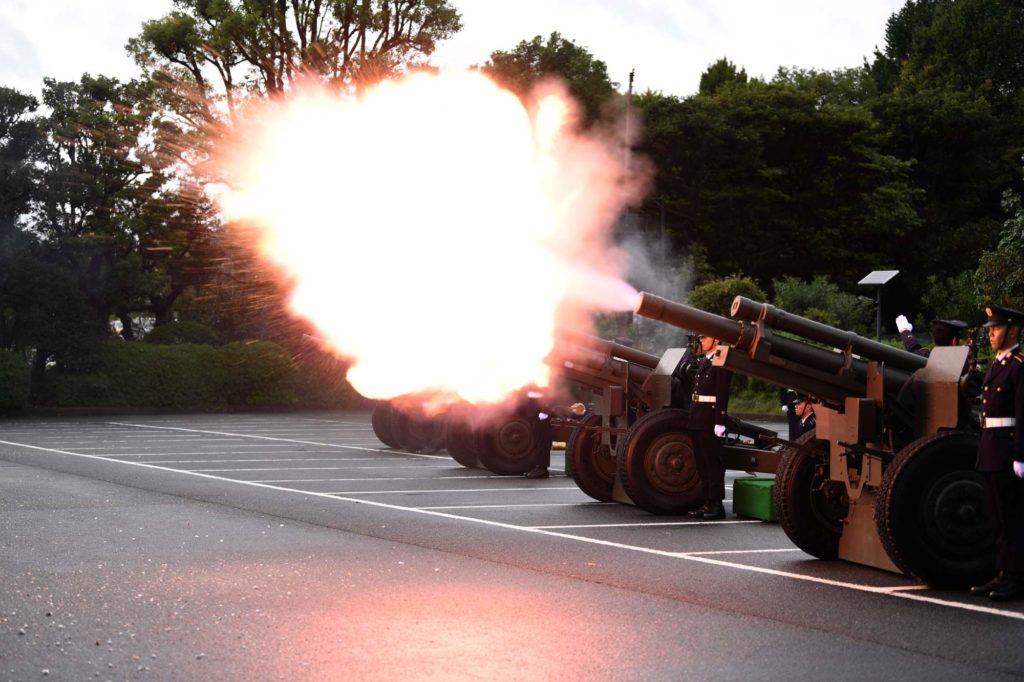 Initially, a parade had been planned for after the ceremony to allow the public to see the imperial couple drive by in a convertible sedan as they traveled back to their residence in the Akasaka district.

However, the government announced that they would reschedule the parade for Nov. 10 out of consideration for those affected by Typhoon Hagibis earlier in the month.

Japan made the day a national holiday and pardoned around 550,000 petty criminals on the occasion, in the first amnesty since the emperor’s 1993 marriage to the empress, a Harvard and Oxford-educated former diplomat.

Security was tightened, with up to 26,000 police officers mobilized from across Japan for the enthronement ceremony.

In the evening, the couple welcomed guests at a court banquet held for the attendees of the enthronement ceremony. The emperor was dressed in a tailcoat, while the empress wore a long dress and a tiara.

The menu for the around 450 guests including foreign dignitaries in the palace’s Homei-Den state banquet hall features grilled young seabream, salt steamed abalone, and a soup of Japanese spiny lobster and “matsutake” mushrooms.

“We want our guests to enjoy Japanese delicacies from mountains and the sea,” a senior official of the Imperial Household Agency said before the banquet, broadly in the style of the 1990 court banquets to mark the enthronement of Emperor Akihito, who abdicated on April 30 this year.

In consideration of guests from diverse backgrounds, halal dishes have been prepared for Muslim guests, and the chefs have substituted soy milk skin for beef in a dish for vegetarians.

For guests unfamiliar with Japanese cuisine, Western dishes such as beef and asparagus rolls have also been prepared.

Three other “Kyoen no gi” court banquets are scheduled for Friday, Oct. 29 and 31 to celebrate the enthronement of the emperor, who ascended to the throne on May 1.

A total of 2,600 guests are expected to attend the four banquets, according to the agency.