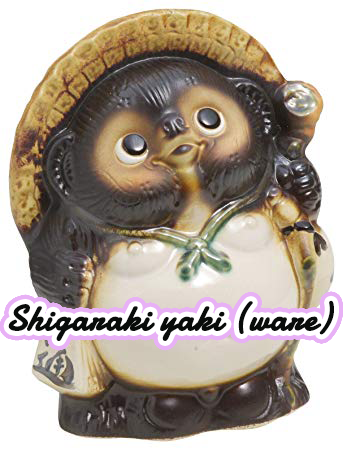 Hi  Messrs. ＆ Mses. Japanophiles.  how are you doing?  Today’s topic is “Shigaraki ware” which is called “Shigaraki yaki” in Japanese and it is one of the Six Ancient Kilns in Japan.

In addition, a morning drama titled “Scarlet” about the Shigaraki ware made by a female potter has just started broadcasting on NHK since this October for six months from now.

Therefore, Shigaraki wares will be supposedly to be becoming much more popular among enthusiasts of ceramics in not only Japan also around the world since the morning dramas have been enjoying with a very high audience rating.

What’s “Shigaraki yaki (ware)” and what are Six Ancient Kilns?

Shigaraki yaki (ware) is a type of stoneware pottery made in Shigaraki area, Shiga prefecture, Japan. The kiln is one of the Six long-lived noteworthy Kilns, those are as follows, 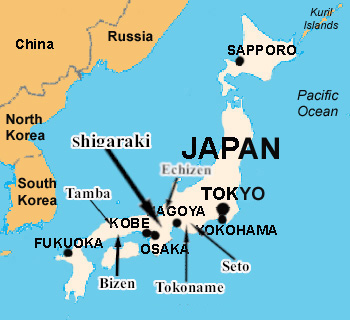 Biwa Lake is the largest lake in Japan both in size and in volume of water. Shiga citizens and the prefectural government are particularly conscious about the environment. 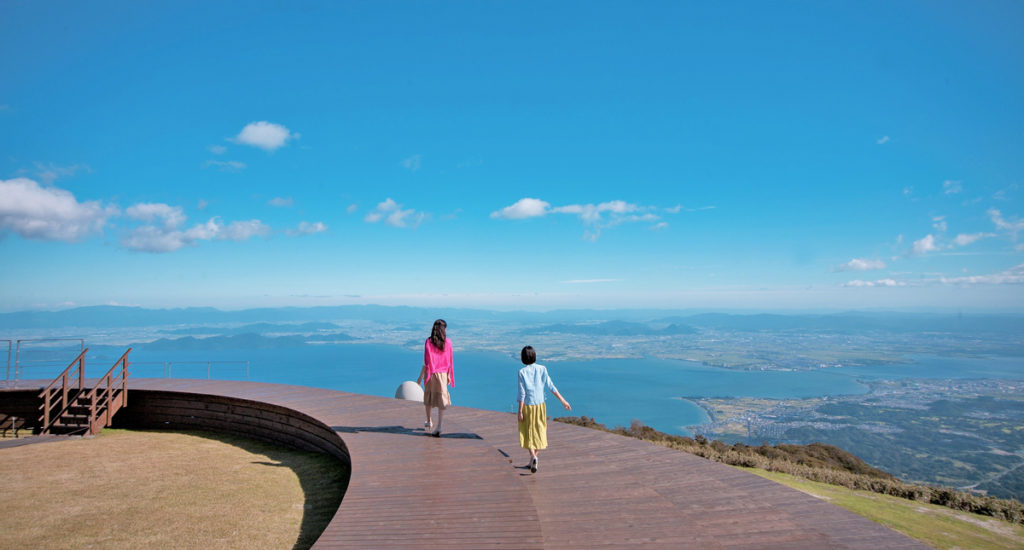 Shiga prefecture has thus naturally attracted many environmental related corporations and human resources. As a result, Shiga Prefecture is known to be one of most environment friendly places in Japan.

Shiga prefecture has easy access from surrounding regions, which has helped to develop its merchant philosophy.

This area has been very famous for “Ōmi” merchant spirit, whose spirit came from “There must be value for the seller, buyer and public”, not from a mercenary spirit or a sordid spirit.

In other words, it is important that business be not all about the profit for the seller. The customers must be satisfied as well and each business must bring wealth to the community, promoting the general welfare of the people as a whole.

Shigaraki ware is mainly made in Shigaraki, Koga city, Shiga. It has a warm fire color that it gets from the good soil in the nearby hills.

Natural soil compositions and chemical reactions give the pottery blue and yellowish tones as well as a unique finish. Shigaraki attracts fans who appreciate an earthy art created by people, soil and fire. 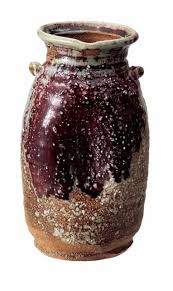 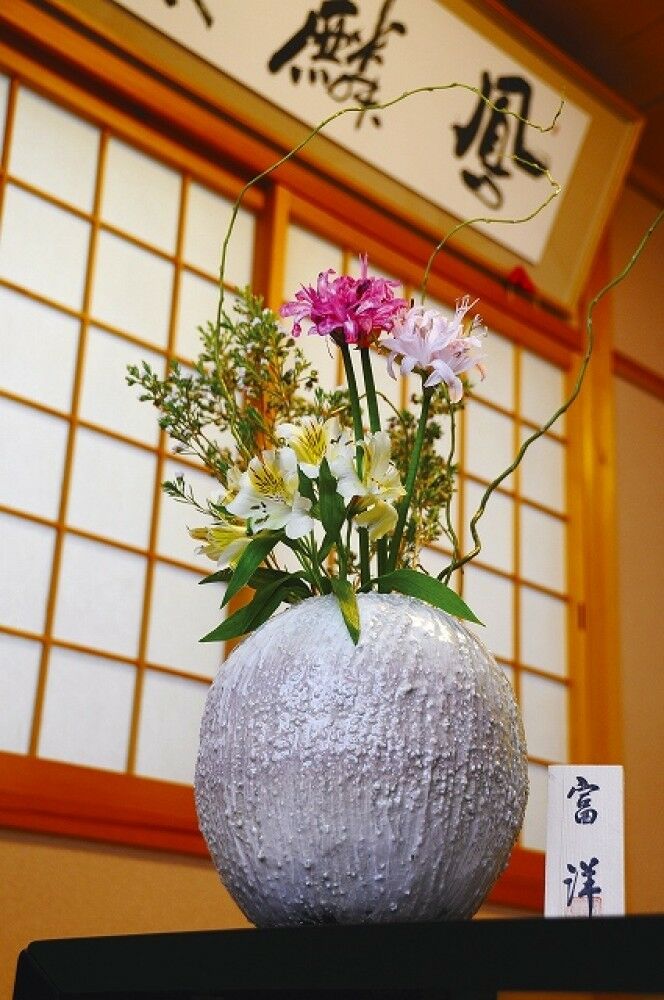 Clays such as kibushi, mizuchi, or gairome are kneaded to make a strong clay that can be used to make thick and large pottery vessels.

One notable feature of Shigaraki ware is that it is made using coarse soil so it is highly fire-resistant. In the firing process, it acquires pink or other shades of red, becoming red with scarlet or brown overtones.

Due to subtle changes that depend on the temperature and firing method, Shigaraki ware’s white clay takes on a scarlet glow and warm coloring, a characteristic unique to this craft.

When the pottery gets buried in the ashes from complete combustion of wood in the kiln, the bottom portion takes on a softer, dark brown color. The fact that this pottery is glazed also helps give the surface a smooth look.

The rusty glaze on the scorched portions of Shigaraki ware is prized in tea utensils.

Shigaraki ware is unique because of its simple warmth and rich expressiveness.

What’s the history of Shigaraki ?

Shigaraki ware is considered to be one of the most outstanding Japanese kilns with traditions that remain even today.

It is said to have originated in the eighth century, when Emperor Shomu had tiles fired for the construction of the Shigaraki Palace.

Up until the middle of the Kamakura period (1185-1333), its main products were items like water jugs, but with the development of the tea ceremony during the Azuchi-Momoyama period (1573-1600), the production of tea utensils increased.

Excellent tea utensils were crafted, and Shigaraki ware tea utensils that possess the aesthetic qualities of wabi (humble simplicity) and sabi (beauty in wear) are still around today.

During the Edo period (1603-1868), the business of manufacturing various utensils for daily use expanded with the making of sake bottles and earthenware pots.

During the years between the Taisho period (1912-1926) and shortly before World War Ⅱ, Shigaraki hibachi pots (earthenware indoor heating pan) were the most popular type in households. 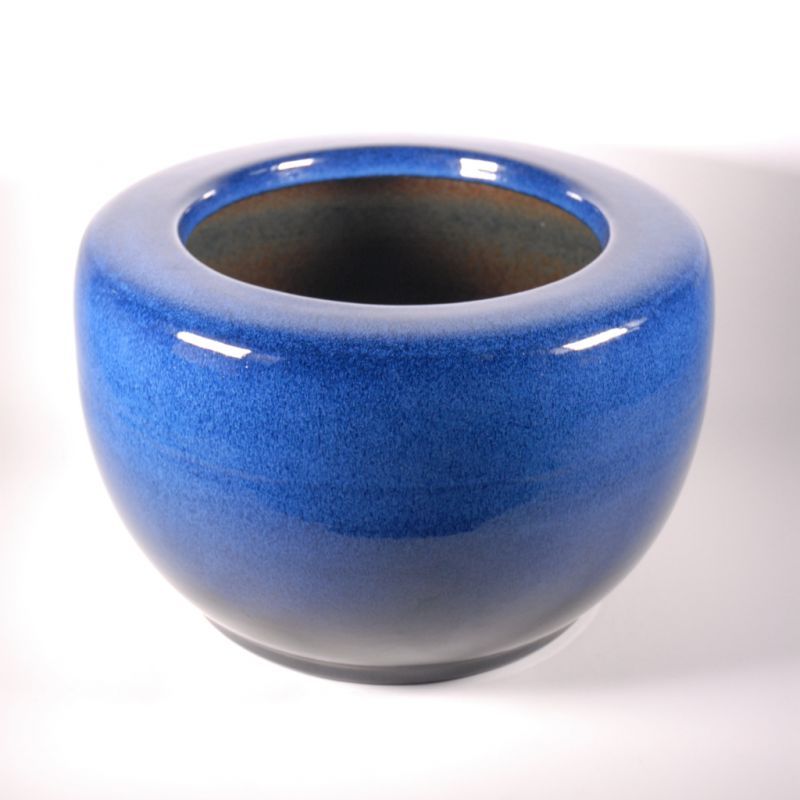 In fact, Shigaraki ware accounted for 80% of all the hibachi pots sold within the country.

Because the unique earthy texture of Shigaraki ware is beloved, there is a wide variety of items available, from vases and tableware to ornaments and tiles.

There are also Shigaraki ware Japanese raccoon dog (tanuki) statues which have become so popular that they are synonymous with Shigaraki ware which is explained later.

In 1976 Shigaraki ware was designated as a National Traditional Craft and Shigaraki is popularly referred to as “Shigaraki, the pottery town”.

Wabi-sabi are two key aesthetic concepts of wabi or rustic beauty, both manmade and in nature, and sabi or change making things more valuable. 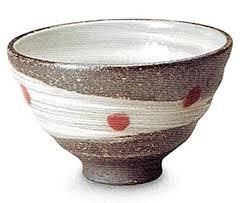 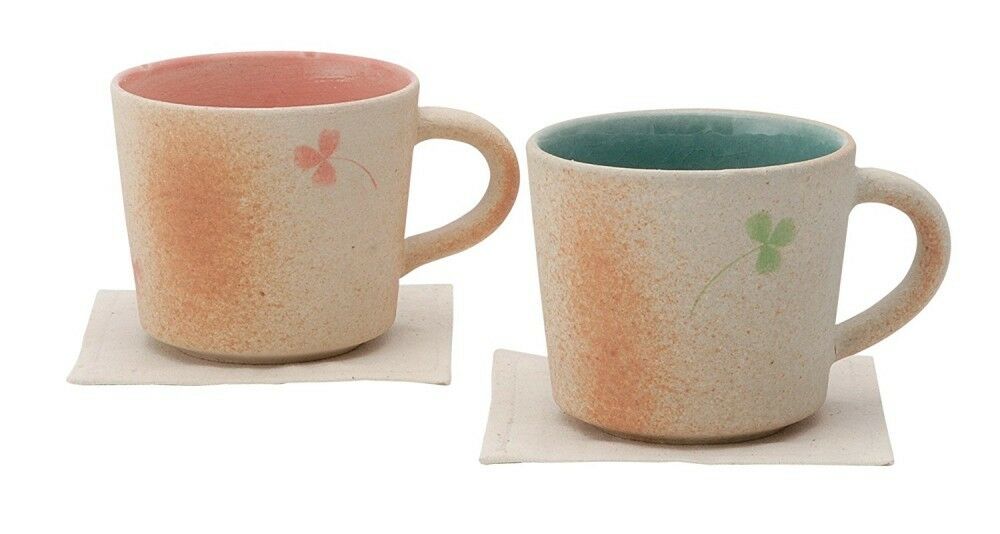 The clay used in Shigaraki ware is taken from an ancient layer that accumulated at the bottom of Lake Biwa, just north of Kyoto.

The soil, which started building up around four million years ago, is fire resistant and can produce the rustic texture and warm scarlet coloration of Shigaraki pottery.

The dug out soil is mixed to become a malleable potter’s clay. It is then crushed along with other materials and kneaded well with water to give it an even better texture.

Depending on the type of pottery that is being made, the clay may need more time in the kneading machine.

A design is applied to the molded vessel by carving, marking, or other methods.

Decorative patterns are applied too. Some common designs are matsukawa, a pine bark or inka, small flowers.

In some cases, the artisan paints the decoration by hand. In underglaze painting, decoration is applied using iron sand or impure cobalt oxide.

After the biscuit firing, low-heat initial firing, the ceramic material is glazed. Feldspar, limestone, silica and iron oxide are mixed together and an air gun, brushes or ladle is used to glaze the piece.

During the firing, the glaze melts and gives a different impression as it takes on a bright color, revealing the skill and originality of each potter.

When the glaze is too thick, it doesn’t melt even when fired or shrinks, failing to take on a beautiful coloration.

In the same way, when it is too thin, the color is consumed by the raw clay and the underlying color is exposed just as it is. Therefore, this is a process requiring experience and skill.

The products arranged in the kiln are fired at a high temperature of 1200℃ (about 2192℉) or more.

The special texture of Shigaraki-ware dates back to ancient times, when pottery was fired in a wood-burning climbing kiln (ancient type of pottery kiln brought to Japan from China and Korea) and the ashes and soil became glass-like in the flames, creating a natural glaze.

Nowadays, there are potters who use gas kilns or electric kilns, which provide stable heat.

Because the quality of the finished pottery depends on the environment (the temperature, humidity etc), the potter doesn’t know how the pottery will turn out until the kiln is opened.

Firing Shigaraki ware requires paying a lot of attention to traditions as well as modern sensibilities and techniques.

After the pieces have been loaded and fired for more than 24 hours, the work of unloading begins.

The temperature at the time of unloading is about 200℃ (about 392℉), so the workers must wear work gloves and take other precautions to avoid being burned.

Each piece’s top and base is then polished again as a finishing touch.

What’s Tanuki (raccoon dog) is a symbol of Shigaraki ware?

Tanuki (raccoon dog) is a special good luck statue! “Ta” means other(s) and “nuki” is surpass. Combined together, it means, “I am better than them!” So if you like to win, Tanuki is the animal you need on your side!

He is plump and wears a straw hat, his head is slightly tilted, and he carries around a bottle of sake with him.

He is an adorable creature often seen on the front porch of homes and the entrance to restaurants in statue form. Tanuki come in all sizes, including some that fit in your palm, and human sized ones as well! 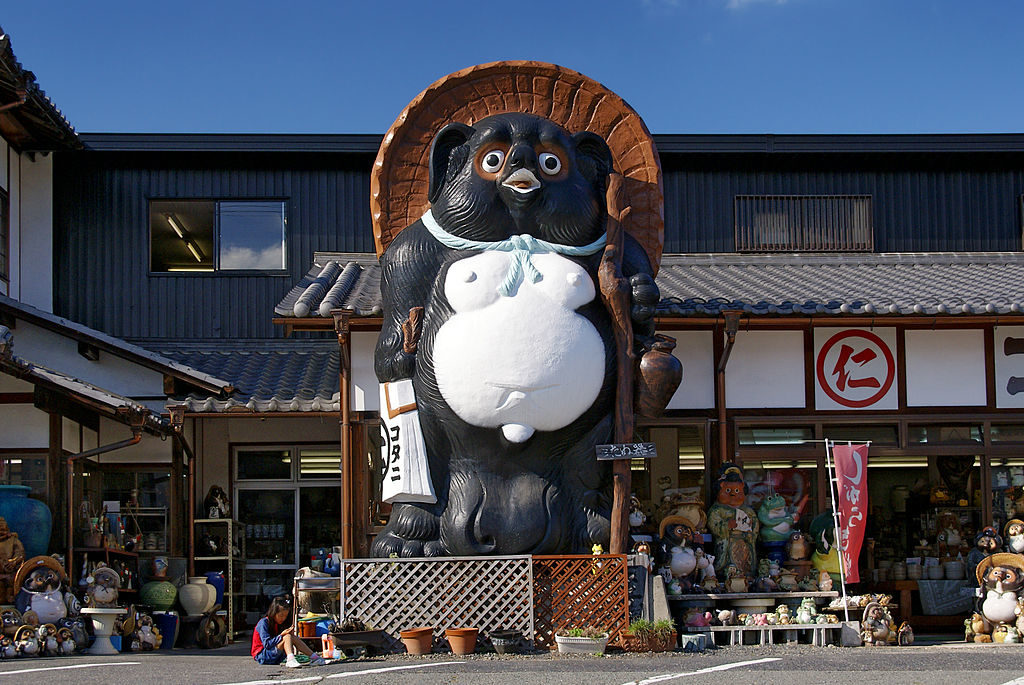 It is said that pottery artist Fujiwara (1876-1966) created the original Tanuki statue. Therefore, it is relatively a new tradition.

In 1951, When the Showa Emperor visited Shigaraki, the local people placed Tanuki statues with a Japanese flag along the street welcoming him.

He was so delighted at the scene that he read a poem in front of the entire town. This event was broadcasted, and as a result, Shigaraki-ware became an instant sensation in Japan.

Tanuki will welcome all visitors who come to Shigaraki. In fact, the Tanuki population exceeds the human population in this quirky place! 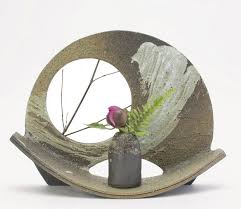 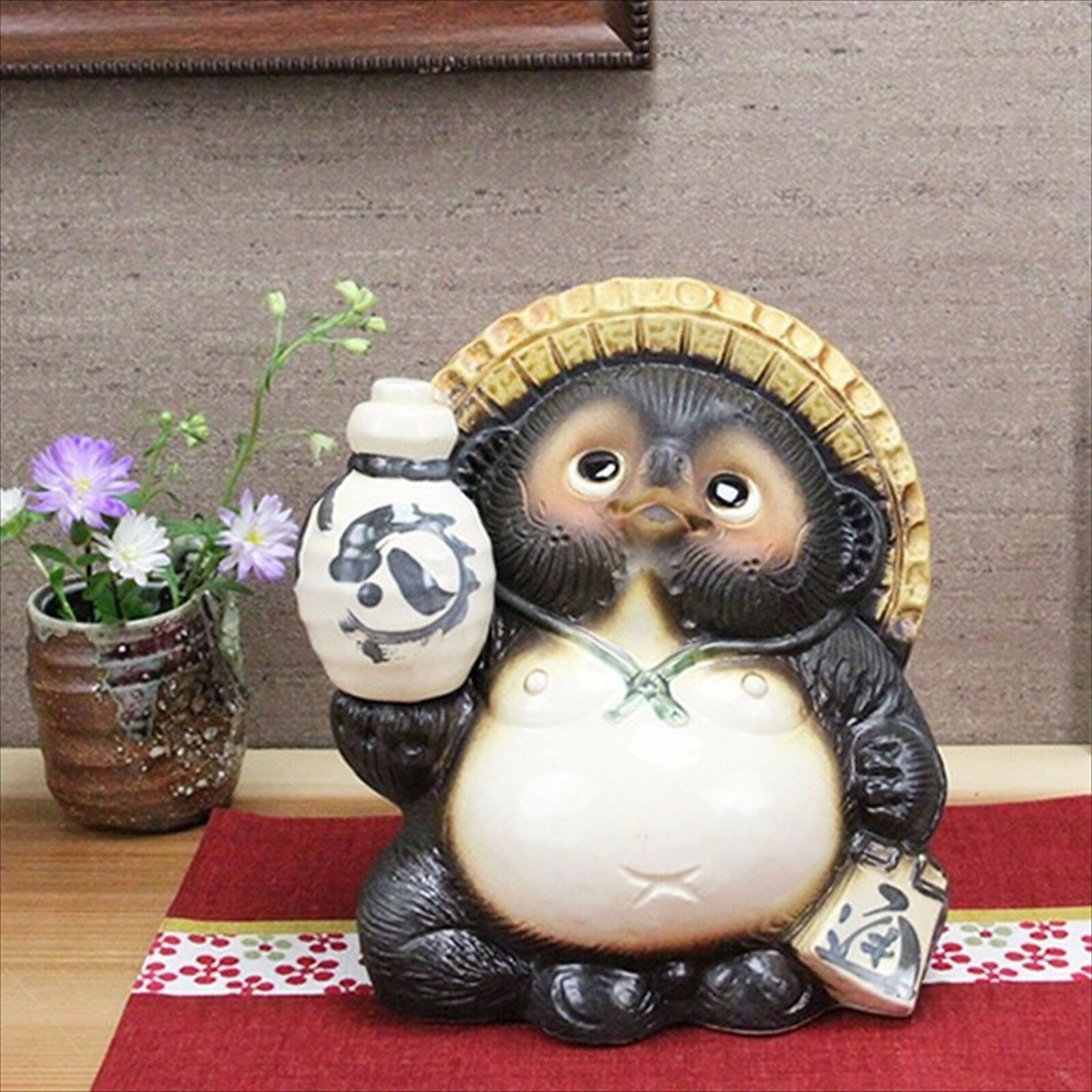 In conclusion, we have a similar article of “Oribe yaki (ware)” is well worth a visit, thanks