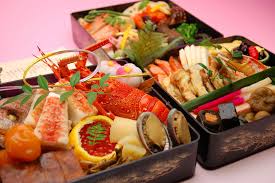 A Happy New Year! I’m very happy to greet everyone who would be a nice year and I’m also happy to talk about “Osechi Ryōri” (New Year’s Cuisine) which is Delicious and Auspicious.

Osechi ryōri is a unique Japanese cooking that can only be enjoyed during the New Year’s holiday in Japan, where every dish has an auspicious meaning to complement the taste. 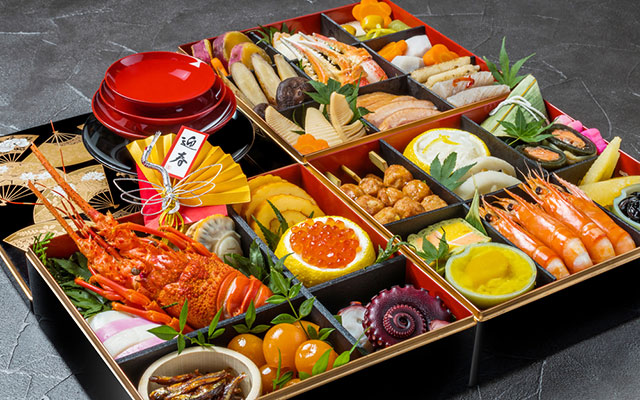 Osechi ryōri refers to a beautiful and delicious medley of traditional Japanese new year food, usually eaten during the first three days of the new year.

It has been enjoyed since the Heian period (794-1185), when it was actually considered taboo to cook food during those first three days.

The foods are stored in a traditional multi-tiered lacquer box called “jubako” and eaten at room temperature. 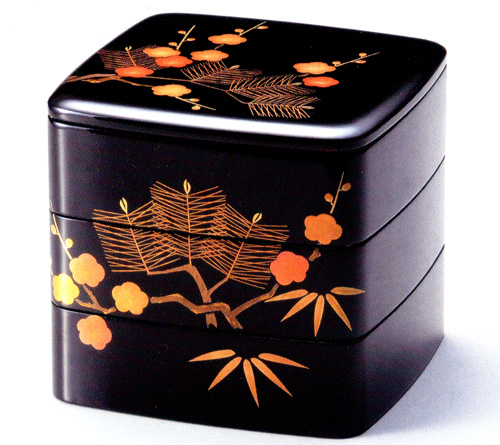 The dishes that make up osechi ryōri each have a special meaning celebrating the New Year. Some examples are:

Datemaki, sweet rolled omelette mixed with fish paste or mashed shrimp. They symbolize a wish for many auspicious days.

On auspicious days, Japanese people traditionally wear fine clothing as a part of enjoying themselves.

One of the meanings associated with the second kanji includes “fashionability,” derived from the illustrious dress of the samurai from Date Han. 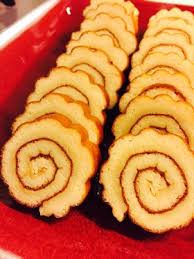 Kamaboko, broiled fish cake. Traditionally, slices of red and white kamaboko are alternated in rows or arranged in a pattern.

The color and shape are reminiscent of Japan rising sun, and have a celebratory, festive meaning.

Kazunoko, herring roe. Kazu means “number” and ko means “child.” It symbolizes a wish to be gifted with numerous children in the New Year.

Konbu, a kind of seaweed. It is associated with the word yorokobu meaning “joy.”

Kohaku-namasu, literally “red-white vegetable kuai,” is made of daikon (radish) and carrot cut into thin strips and pickled in sweetened vinegar with yuzu (citron) flavor.

Tazukuri, dried sardines cooked in soy sauce. The literal meaning of the kanji in tazukuri is “rice paddy maker,” as the fish were used historically to fertilize rice fields. The symbolism is of an abundant harvest.

Ebi, skewered prawns cooked with sake and soy sauce. It symbolizes a wish for a long-life, suggesting long beard and bent waist.

Nishiki tamago, egg roulade; the egg is separated before cooking, yellow symbolizing gold, and white symbolizing silver, both of these together symbolising wealth and good fortune.

Last but not least, I’d like to recommend you to have a try such a felicitous osechi ryōri either at home or restaurant.