Hi  Messrs. ＆ Mses. Japanophiles. how are you?  I’d like to talk about Ohenro (pilgrimage) to holy temples which were believed to have been made by Kobodaishi, a nith century Buddhist priest of Shikoku (one of four main archipelagos in Japan, about two-hours fly from Tokyo) in two parts in two days.

Today part one, I’m explaining why people go on a pilgrimage visiting at 88 temples while mostly walking about 1,200 kilometers (750 miles) in nearly 40 days to 60 days.

What does Ohenro (pilgrimage) do?

Across paddy field, along steep mountain trails, and by the sea. You see some people just walking, and walking regardless of unfavorable weather such as in strong wind, heavy rain,  snow and the like. So they’re pilgrims.

The journey they are on, called the Shikoku pilgrimage, involves wisiting 88 temples on the island of Shikoku.

The total distance is over 1,400 kilometers(870 miles), which takes about two months to complete on foot.

The pilgrims wear white robes similar to those worn by the dead. Originally, this signified their wish to be buried on the spot if they died while undertaking this arduous journey.

This particular pilgrim’s robe bears the names of all the temples, and the wearer can collect temple stamps on it. At each temple, the pilgrims offer prayer slips’ and recite a sutra. It’s believed that when they complete the pilgrimage, their prayers will be answered.

The pilgrmage dates back about 1,200 years tot the time when the high priest Kobo Daishi travelled around Shikoku to spread Buddhist teachings.

After his death, some priests initiated a pilgrimage retracing the steps that he had taken.  Centuries later, during the Edo period, many ordinary people started doing it as well. 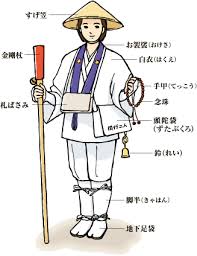 After the Second World War, amid the social instability and food shortages, the number of pilgrims decreased sharply.

The situation was rectified by the introduction of pilgrimage package tours by bus. They enabled pilgrims to visit all 88 temples four times faster than on foot. Many people signed up. The pilgrimage became popular again. 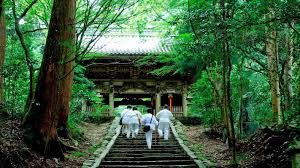 They travel on foot, by bus, by car, and various other ways. Some do it not just for religious reasons but to “find themselves”. This journey still holds special significance for many people.

Finally, we have another website which is well worth a visit “Ohenro(Pilgrimage) Couple from London“.thanks