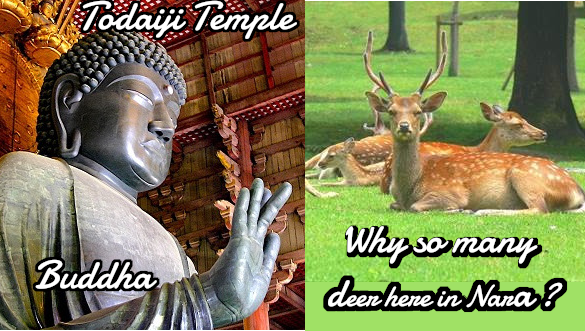 Hello  Messrs. ＆ Mses. Japanophiles,  how is it going?  Today I’d like to talk about “Todaiji temple“, which is one of ”Cool Japan” and the most popular temples to be chosen for almost all school trips from all over the country when we were in elementary and/or junior high school days.

Todaiji temple is an enormous Buddhist temple in Nara, Japan’s ancient capital. It covers an area as large as about 50 baseball stadiums.

The temple is a listed UNESCO World Heritage Site as one of the “Historic Monuments of Ancient Nara”, together with seven other sites including temples, shrines and places in the city of Nara. 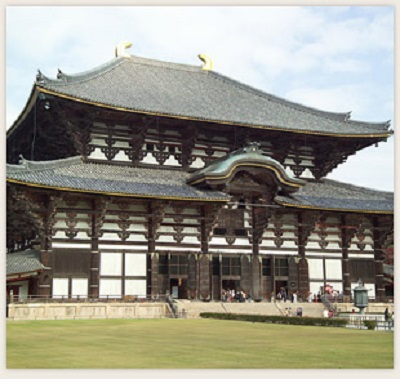 The temple was founded when Nara became the nation’s capital about 1,300 years ago, in the hope that it would bring peace to Japan.

The sheer scale of Tōdaiji is overwhelming. At its center is the Great Buddha Hall. With a width of 57 meters(187 ft), it’s one of the largest wooden buildings in the world.

How did they manage to make such a huge statue of Buddha all those centuries ago?

Japan suffered from a series of disasters and epidemics. So Emperor Shomu issued an edict in 741 to promote the construction of provincial temples throughout the nation.

It started to construct in 743 and Todaiji temple was extremely difficult project in building. It’s said that the original version was cast in eight separate stages using the cutting-edge technology of the time.

The principal object of worship that the Great Buddha Hall houses is also an immense Buddha. Standing 15 meters (50 ft) tall, it’s the world’s largest bronze Buddha.  Accumulative workforce of 2.6 million was needed to construct it.

And it’s recorded that a total of about 500 tons of copper was used, gathered from various parts of the country.

But the statue was originally coated in gold and the casting took a total of twelve years, in which five years of that were spent just on the gold-plating.

And there was a big problem, that is mercury was mixed with the gold to make it adhere to the statue. What many people don’t know is that many of the workers suffered from mercury poisoning.

Hence, the statue has been reconstructed several times mainly due to the fire.

Maintenance of the Buddha

The ritual cleaning performed every August gives a good sense of the statue’s massive size. 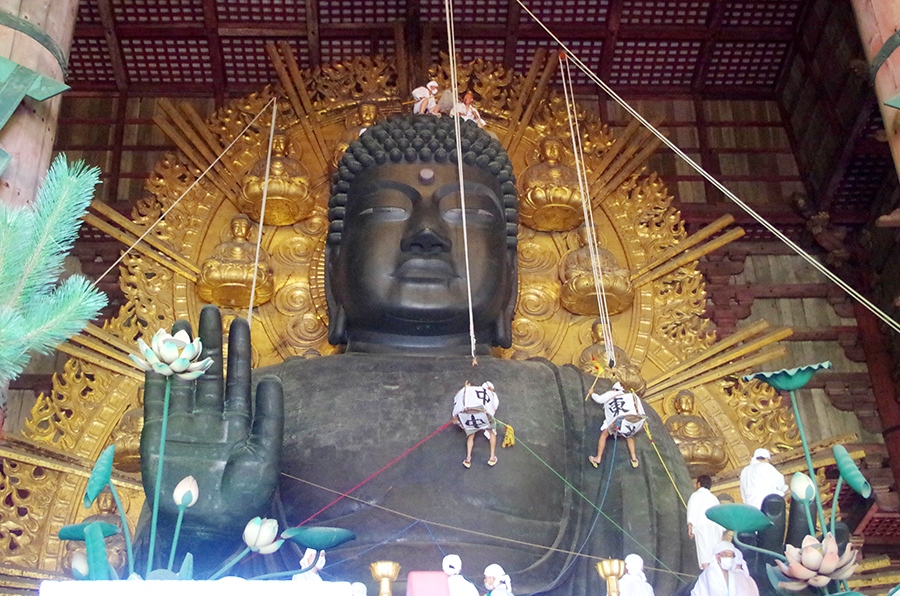 Because Tōdaiji boasts such a long history, it presents a fine overview of the history of Buddhist sculputure in Japan.

There are two statues of guardian warriors at the temple’s main gate, Nandaimon. These Kongo-rikishi statues were created by Unkei and Kaikei-master sculptors of Buddhist statues who lived around 800 years ago. 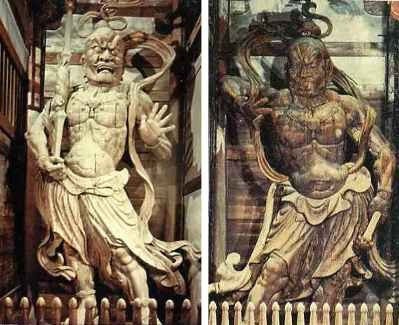 Tōdaiji is also known for hosting a wide variety of annual events.

In March, a ritual called Shuni-e is held. It’s commonly known as Omizu-tori.

On behalf of the people, the priests atone for their sins and faults, and offer prayers for the security and happiness of the nation.

Then comes the climax of the event, called Otaimatsu. Torches like these originally served to light the priests’ way, but at some point the idea took hold that having a spark fall on you would ensure a year free of illness.

Todaiji treasure house, Shosoin  What is it?

The Shōsō-in is the treasure house that belongs to Todaiji temple in Nara. The building is in the azekura log-cabin style, with a raised floor.

It lies to the northwest of the Daibutsuden (which houses the Great Buddha). The Shōsō-in houses artifacts connected to Emperor Shōmu (701–756) and Empress Kōmyō (701–760), as well as arts and crafts of the Tempyō period of Japanese history.

It is on the UNESCO register of World Heritage Sites as one of the Historic Monuments of Ancient Nara. It is also a National Treasure of Japan.

MOst feature about the architecture of Shosoin

Some distinctive features of this building style are the triangular, wooden beams that come together in the corners, as well as the fact that it was assembled without using any bolts nor nails. 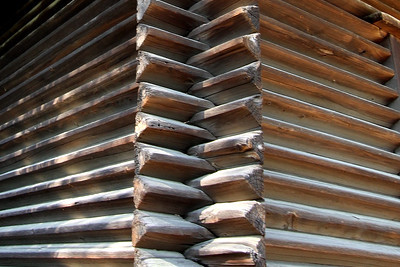 This could be slightly surprising for its height of 14 m, width of 33 m and depth of about 9.3 m.

However, it was a logical and smart step. As a result of assembling the storehouse without bolts or nails, the structure became very flexible and able to withstand earthquakes, a phenomenon of nature that Japan was already well acquainted with during Nara period. 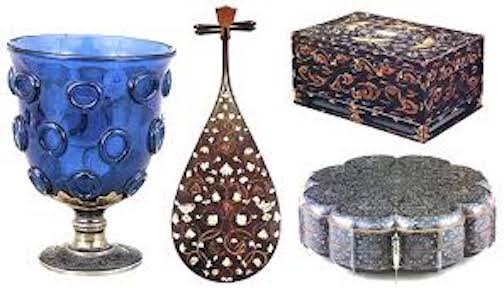 The five-string lute, which originated in India, was often played in Japan in the 8th century. It’s clear that Nara, the capital of Japan at the time, was a cosmopolitan city that had links with the Middle East and Europe.

Why are there so many deer in the park in Nara?

Well. I’ve heard a lot of almost same questions about deer in Nara asking if they are domesticated or wild and why is Nara Park, which includes Kofukuji Temple and Kasuga Taisha Shrine, always full of deer? 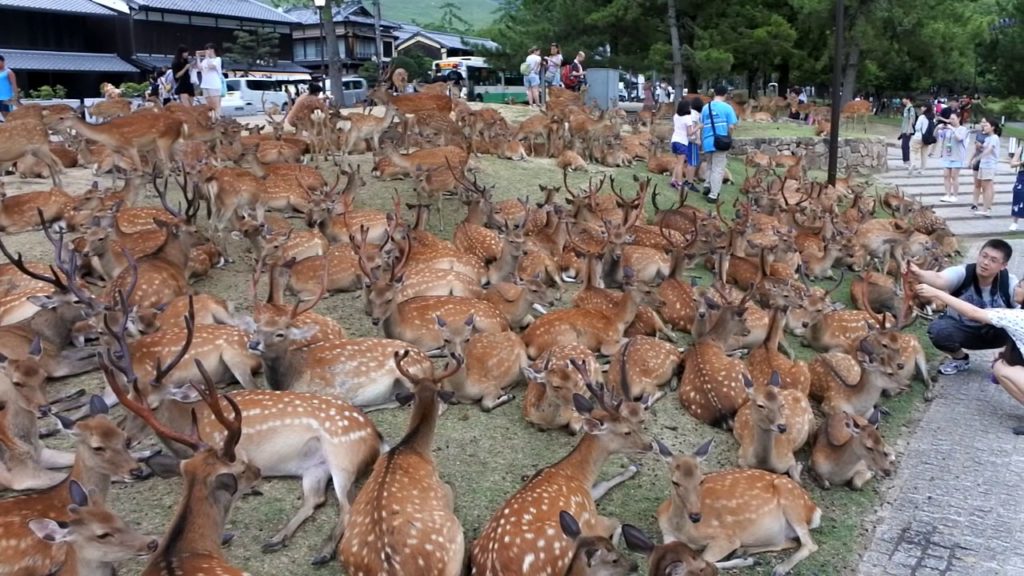 Deer that live in Nara Park are wild animals designated as national natural monuments. Therefore, they are not animals that are bred. Wild animals are “nothings” and do not have an owner.

What more important is deer are regarded as the sacred messengers of the deities enshrined at Kasuga Taisha Shrine, and for that reason they are protected inside the park.

However, it is illegal for an individual to catch or hurt.

Deer are cute animals, but they can be damaged if they don’t know their ecology. Moreover, it is likely to harm the health of the deer and to kill it if it gives sweets etc. just because it is accustomed to the person.

Tōdaiji is a temple that gives us great insight into various phases of Japanese culture.

Finally, we have two blogs related to here’s article, one is “Buddhist statures“, and another “Android Kannon (Buddhist deity) to help people” to be visited, thanks