ホーム » Kinkakuji (The Temple of the Golden Pavilion) 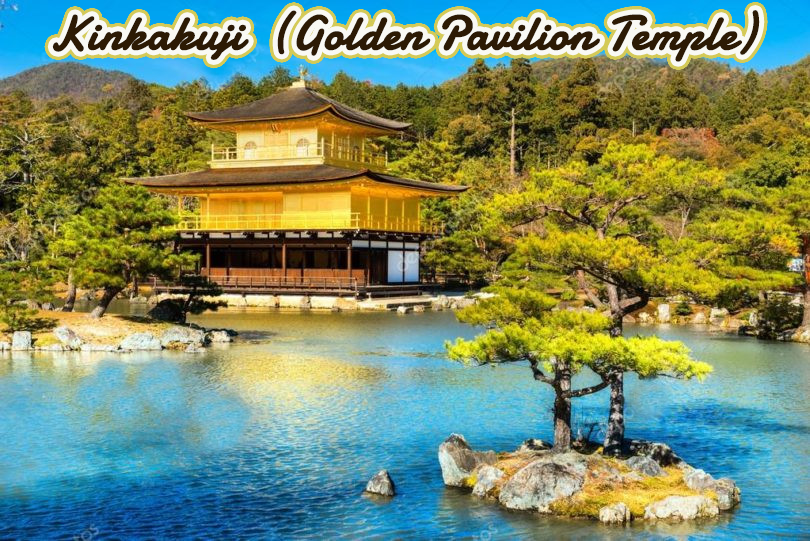 Hi everyone  how is it going?  Today’s theme is representative “Cool Japan” as a Zen Buddhist temple, “Kinkakuji (The Temple of the Goldden Pavilion)” or “Golden Pavilion Temple”.

What’s “Kinkakuji (The Temple of the Golden Pavilion)” ?

It is one of the most popular buildings in Japan, attracting a large number of visitors annually.

The Golden Pavilion is a three-story building on the grounds of the Rokuon-ji temple complex.

The top two stories of the pavilion are covered with pure gold leaf.

The pavilion functions as a shariden, housing relics of the Buddha (Buddha’s Ashes).

The building was an important model for Ginkaku-ji (Silver Pavilion Temple), and Shōkoku-ji, which are also located in Kyoto.

When these buildings were constructed, Ashikaga Yoshimasa  employed the styles used at Kinkaku-ji and even borrowed the names of its second and third floors. 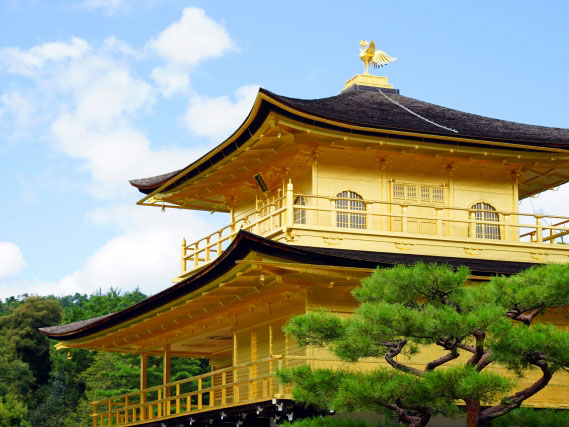 The site of Kinkaku-ji was originally a villa belonging to a powerful statesman. Kinkaku-ji’s history dates to 1397, when the villa was purchased from the Saionji family by shōgun Ashikaga Yoshimitsu, and transformed into the Kinkaku-ji complex.

When Yoshimitsu died, the building was converted into a Zen temple by his son, according to his wishes.

During the Onin war (1467–1477), all of the buildings in the complex aside from the pavilion were burned down.

On July 2, 1950, the pavilion was burned down by a 22-year-old novice monk, who then attempted suicide on the Daimon-ji hill behind the building.

He survived, and was subsequently taken into custody. The monk was sentenced to seven years in prison, but was released because of mental illnesses (persecution complex and schizophrenia) and he died of tuberculosis in 1956.

During the fire, the original statue of Ashikaga Yoshimitsu was lost to the flames (now restored).

A fictionalized version of these events is at the center of Yukio Mishima’s 1956 book titled “The Temple of the Golden Pavilion”.

The present pavilion structure dates from 1955, when it was rebuilt. The pavilion is three stories high, 12.5 meters (40 feet) in height.

The reconstruction is said to be a copy close to the original, although some doubt such an extensive gold-leaf coating was used on the original structure.

In 1984, the coating of Japanese lacquer was found a little decayed, and a new coating as well as gilding with gold-leaf, much thicker than the original coatings (0.5 µm instead of 0.1 µm), was completed in 1987.

Additionally, the interior of the building, including the paintings and Yoshimitsu’s statue, were also restored. 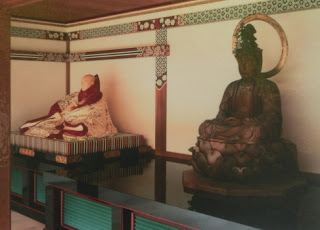 Finally, the roof was restored in 2003. The name Kinkaku is derived from the gold leaf that the pavilion is covered in.

Gold was an important addition to the pavilion because of its underlying meaning. The gold employed was to mitigate and purify any pollution or negative thoughts and feelings towards death. 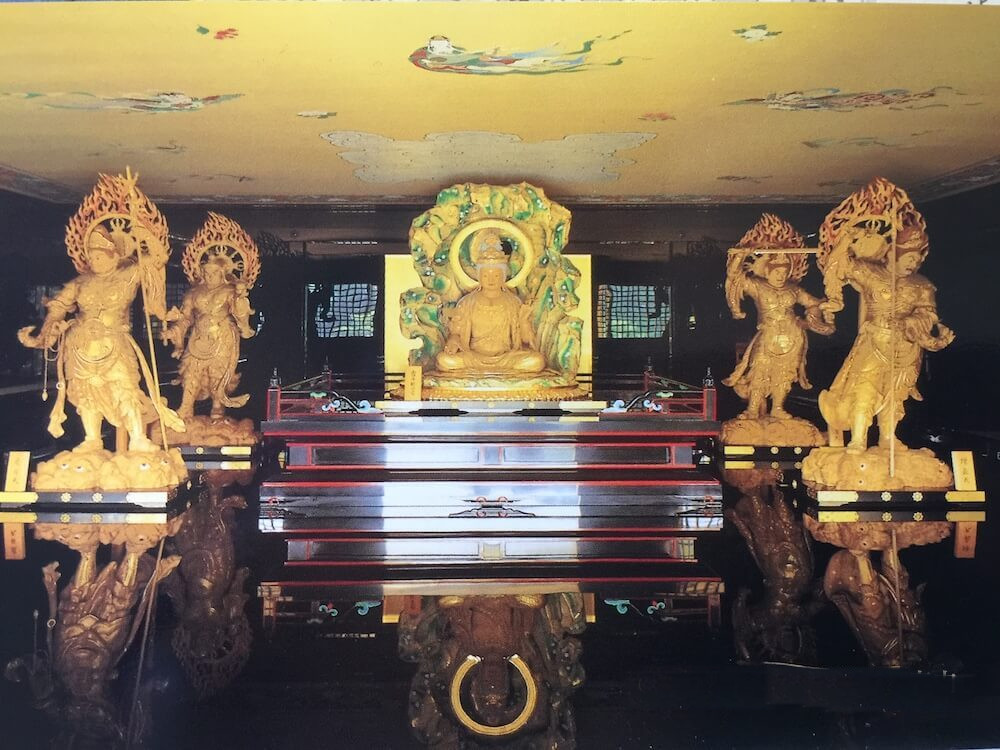 Other than the symbolic meaning behind the gold leaf, the Muromachi period heavily relied on visual excesses.

With the focus on the Golden Pavilion, how the structure is mainly covered in that material, creates an impression that stands out because of the sunlight reflecting and the effect the reflection creates on the pond. 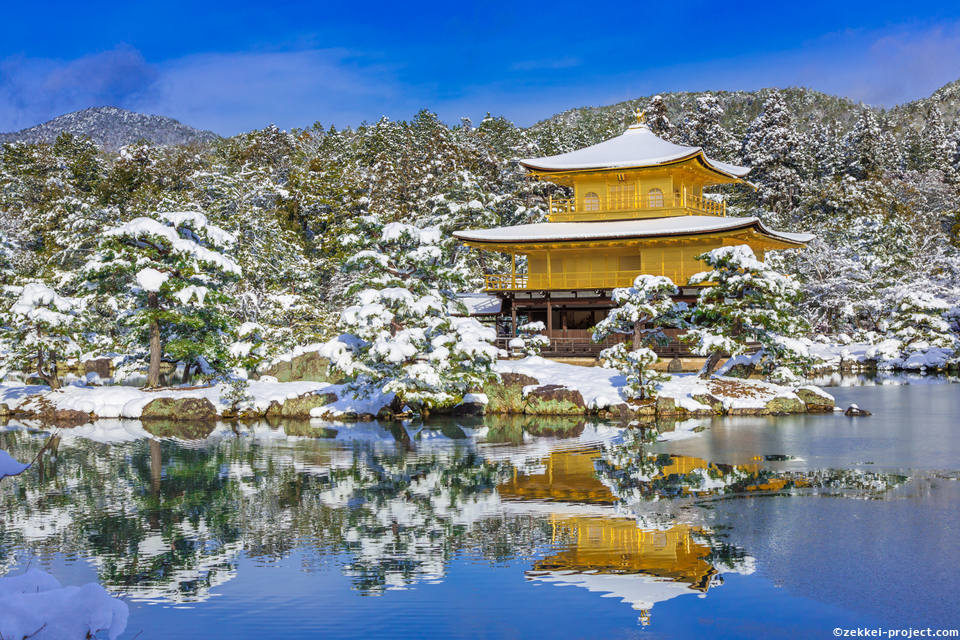 The pavilion successfully incorporates three distinct styles of architecture which are shinden, samurai, and zen, specifically on each floor.

Each floor of the Kinkaku uses a different architectural style

The first floor, called The Chamber of Dharma Waters, is rendered in shinden-zukuri style, reminiscent of the residential style of the 11th century Heian imperial aristocracy.

It is evocative of the Shinden palace style. It is designed as an open space with adjacent verandas and uses natural, unpainted wood and white plaster.

This helps to emphasize the surrounding landscape. The walls and fenestration also affect the views from inside the pavilion.

Most of the walls are made of shutters that can vary the amount of light and air into the pavilion and change the view by controlling the shutters’ heights.

The second floor, called The Tower of Sound Waves, is built in the style of warrior aristocrats. On this floor, sliding wood doors and latticed windows create a feeling of impermanence. The second floor also contains a Buddha Hall and a shrine dedicated to the goddess of mercy, Kannon.

The third floor is built in traditional Chinese chán (Jpn. zen) style, also known as zenshū-butsuden-zukuri. It is called the Cupola of the Ultimate.

The zen typology depicts a more religious ambiance in the pavilion, as was popular during the Muromachi period.

The roof is in a thatched pyramid with shingles. The building is topped with a bronze phoenix ornament. From the outside, viewers can see gold plating added to the upper stories of the pavilion.

The gold leaf covering the upper stories hints at what is housed inside: the shrines. The outside is a reflection of the inside.

The elements of nature, death, religion, are formed together to create this connection between the pavilion and outside intrusions. 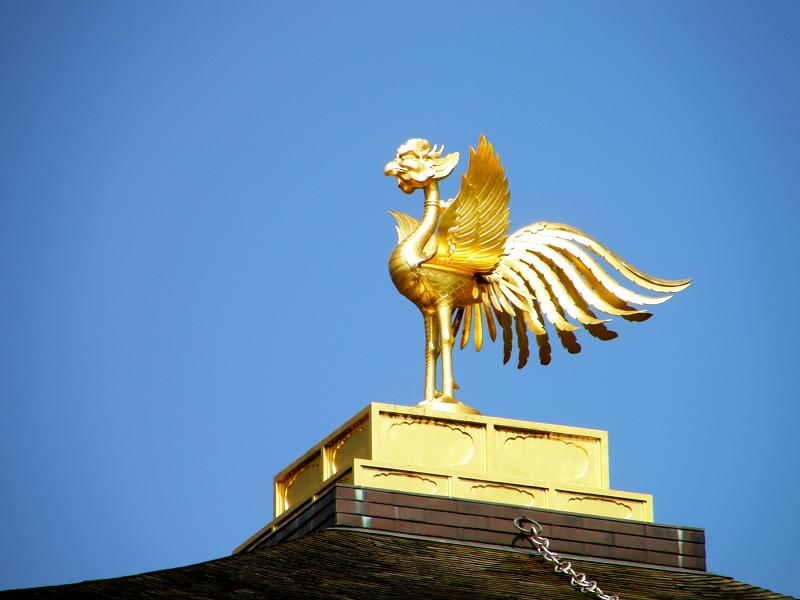 The Golden Pavilion is set in a magnificent Japanese strolling garden, lit. a landscape garden in the go-round style.

The location implements the idea of borrowing of scenery that integrates the outside and the inside, creating an extension of the views surrounding the pavilion and connecting it with the outside world.

The pavilion extends over a pond, called Kyōko-chi (Mirror Pond), that reflects the building. The pond contains 10 smaller islands.

The zen typology is seen through the rock composition, the bridges, and plants are arranged in a specific way to represent famous places in Chinese and Japanese literature.

Vantage points and focal points were established because of the strategic placement of the pavilion to view the gardens surrounding the pavilion.

A small fishing deck is attached to the rear of the pavilion building, allowing a small boat to be moored under it.

The pavilion grounds were built according to descriptions of the Western Paradise of the Buddha Amida, intending to illustrate a harmony between heaven and earth.

The largest islet in the pond represents the Japanese islands. The four stones forming a straight line in the pond near the pavilion are intended to represent sailboats anchored at night, bound for the Isle of Eternal Life in Chinese mythology. 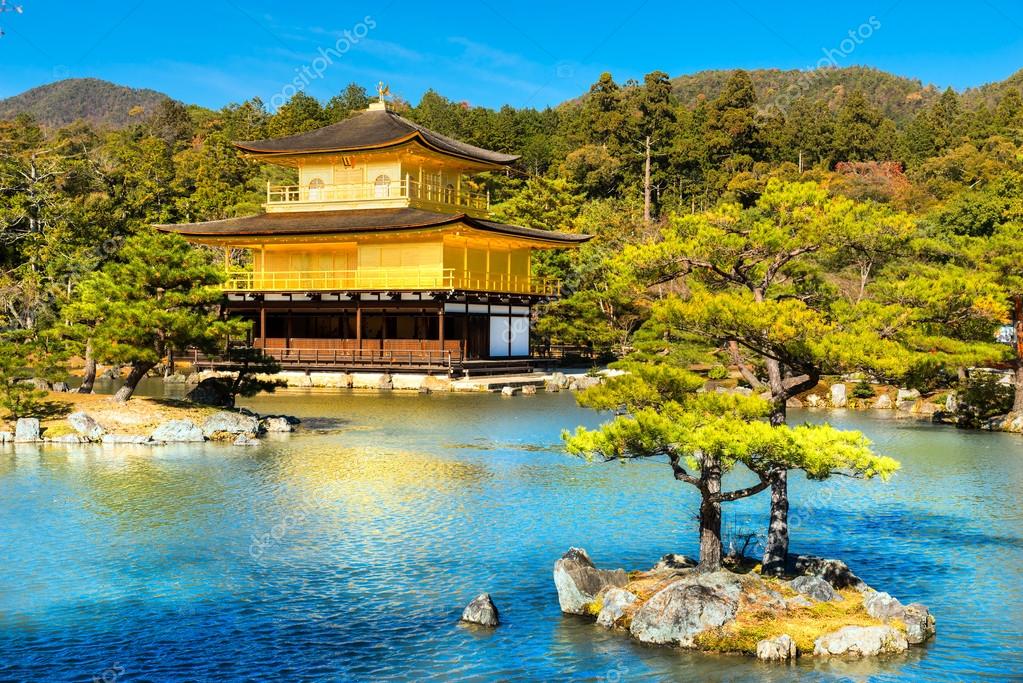 The correlation between buildings and its settings were greatly emphasized during this period. It was a way to integrate the structure within the landscape in an artistic way.

The garden designs were characterized by a reduction in scale, a more central purpose, and a distinct setting.

A minimalistic approach was brought to the garden design, by recreating larger landscapes in a smaller scale around a structure. 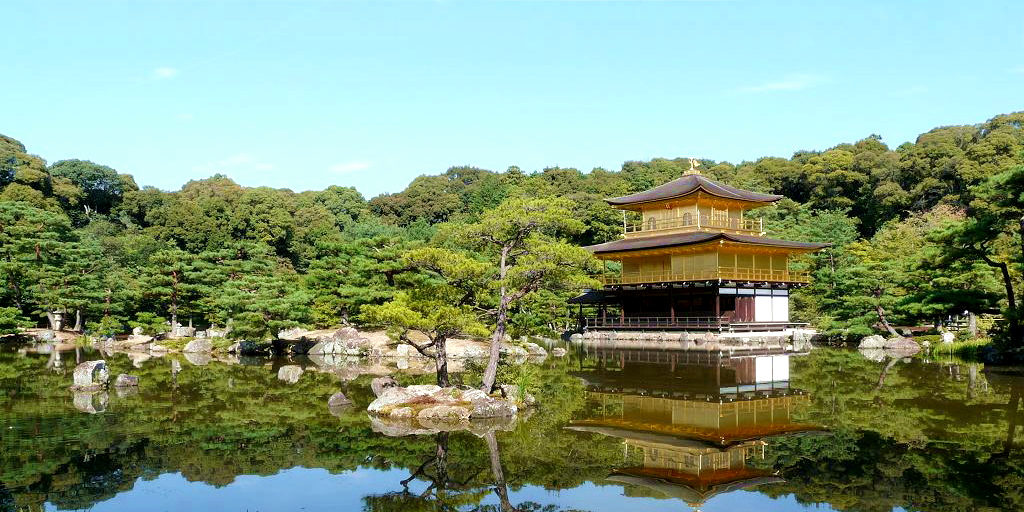