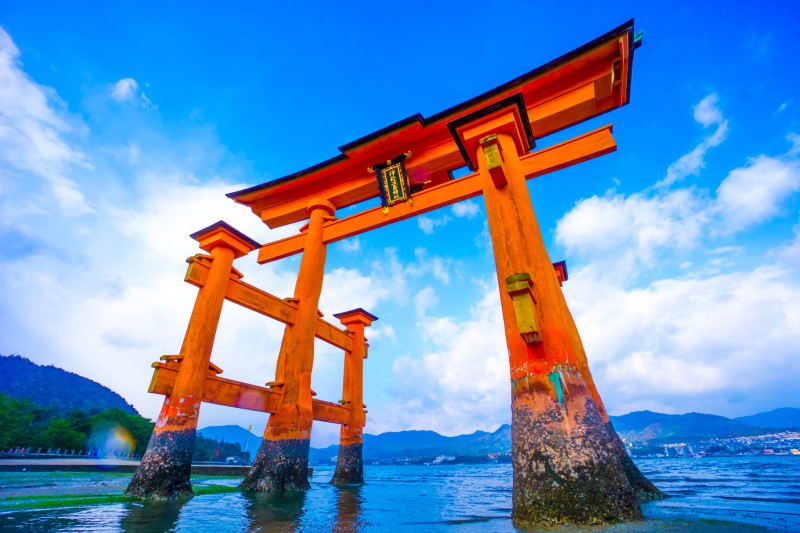 Hi everyone how are you?  I’d like to inform you, first of all, that “Itsukushima Shrine” in which belongs to Hiroshima-ken of Western Japan had suffered extraordinaly torrential rain on July 2018, claiming over 200 people’s lives as shown below. 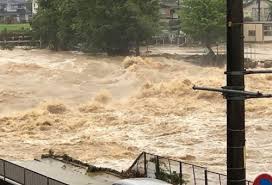 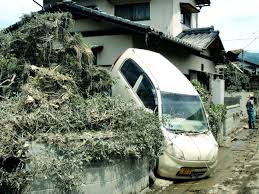 Even though Ikutsushima Shrine is situated in the center of damaged area, the buildings of Shrine had not been damaged so much, rather there were hardly any damages.

It can be said that god protected the Shrine.

Itsukusima Shrine is which?  Shinto or Buddhism?
Because there are Buddhism buildings there

Itsukusima Shrine is of course nowadays a Shinto shrine on the island of Itsukusima (polularly know as Miyajima), best known for its floating torii gate.

It is in the city of Hatsukaichi in Hiroshima Prefecture in Japan.   The shrine complex is listed as a UNESCO World Heritage Site, and the Japanese government has designated several buildings and possessions as National Treasures.

Beginning in 1868, the new Meiji government approved a series of laws that separated Japanese native kami worship, on one side, from Buddhism which had assimilated it, on the other.

When Buddhism was introduced through China in the Asuka period (6th century), rather than discarding the old belief system, the Japanese tried to reconcile the two, assuming both were true.

As a consequence, Buddhist temples were attached to local Shinto shrines and vice versa and devoted to both kami and buddhas.

The local religion and foreign Buddhism never quite fused, but remained however inextricably linked all the way to the present day, always interacting.

The depth of the resulting influence of Buddhism on local religious beliefs can be seen for example in the fact that much of Shinto’s conceptual vocabulary and even the types of Shinto shrines we see today, with a large worship hall and religious images, are themselves of Buddhist origin.

The formal separation of Buddhism from Shinto took place only as recently as the end of the 19th century, and in many ways the blending of the two still continues.

Both the pagoda from Buddhism and Shinto shrine in front are seen at Itsukushima Shrine as below image, 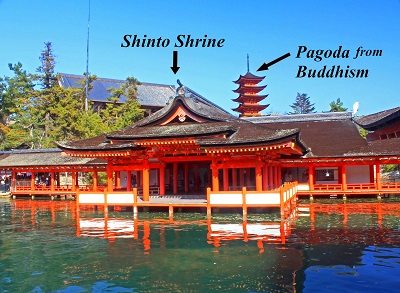 What does the floating torii gate mean?

The dramatic gate, or torii, of Itsukushima Shrine is one of Japan’s most popular tourist attractions.

And the most recognizable and celebrated feature of the Itsukushima shrine, and the view of the gate in front of the island’s Mount Misen is classified as one of the  Three Views of Japan  (along with the sand bar Amanohashidate, and Matsushima Bay). 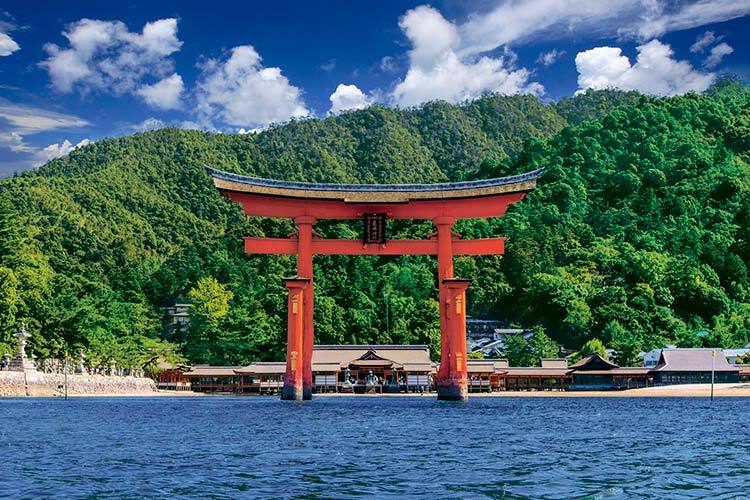 Although a gate has been in place since 1168, the current gate dates back only to 1875. The gate, built of decay-resistant camdphor woo, is about 16 metres (52ft)  high.

The placement of an additional leg in front of and behind each main pillar identifies the torii as reflecting the style of Ryōbu Shintō (dual Shinto), a medieval school of esoteric Japanese Buddhism associated with the Shingon Sect. 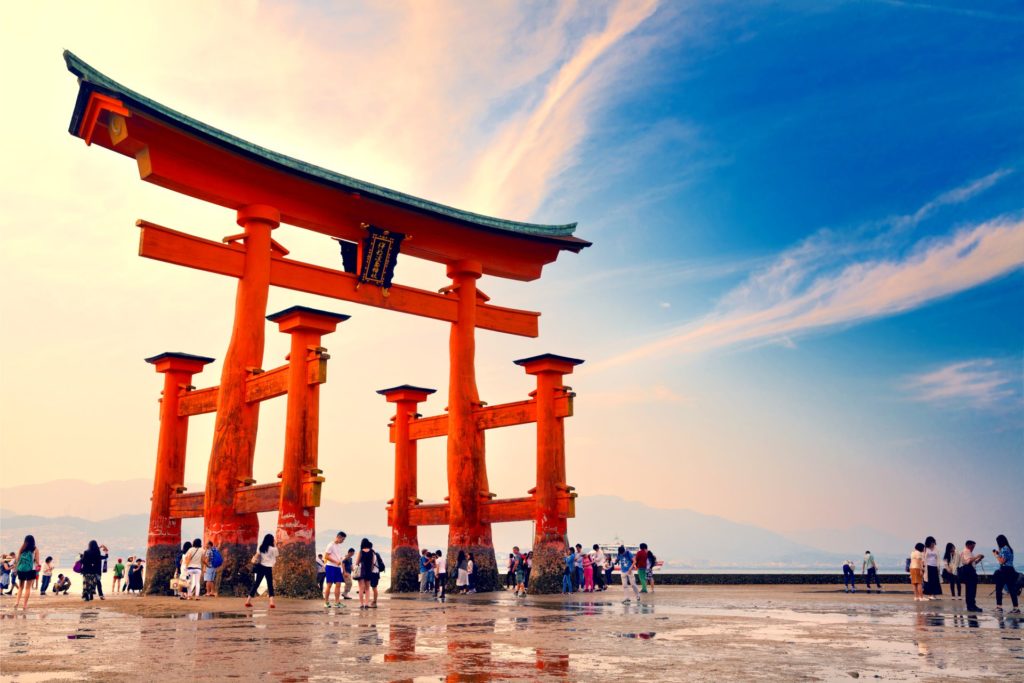 The torii appears to be floating only at high tide. When the tide is low, it is approachable by foot from the island.

Gathering shellfish near the gate is also popular at low tide.

At night, powerful lights on the shore illuminate the torii.   The torii gate, accessible from the island during low tide. 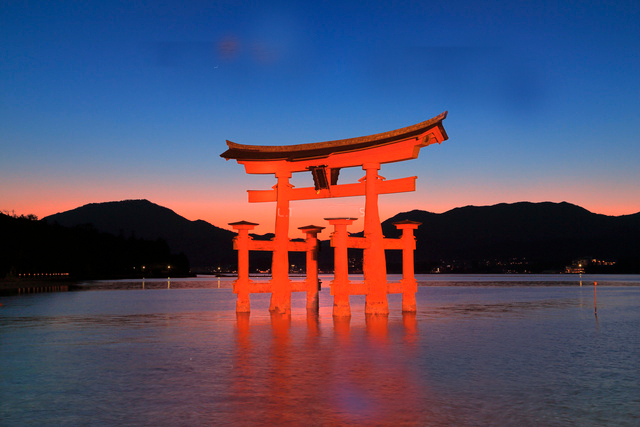 The shrine has been destroyed several times, but the first shrine buildings were probably erected in the 6th century.

The present shrine dates from the mid-16th century, and is believed to follow an earlier design from the 12th century.

That design was established in 1168, when funds were provided by the warlord Taira no Kiyomori 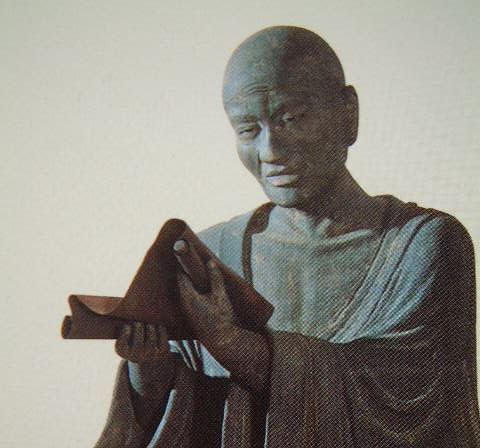 The shrine was devoted to the worship of goddesses to whom Kiyomori owed thanks, he felt, for his success in life.

Originally it was a pure Shinto shrine where no births or deaths were allowed to cause pollution. Its treasures include the celebrated Heike Nōkyō, or ‘Sutras dedicated by the Taira House of Taira’.

These consist of thirty-two scrolls, on which the Lotus and other sutras have been copied by Kiyomori, his sons, and other members of the family, each completing the writing of one scroll.

Kiyomori lavished great wealth upon Itsukushima, and he liked to show the place to his friends and colleagues, or even to royal personages… 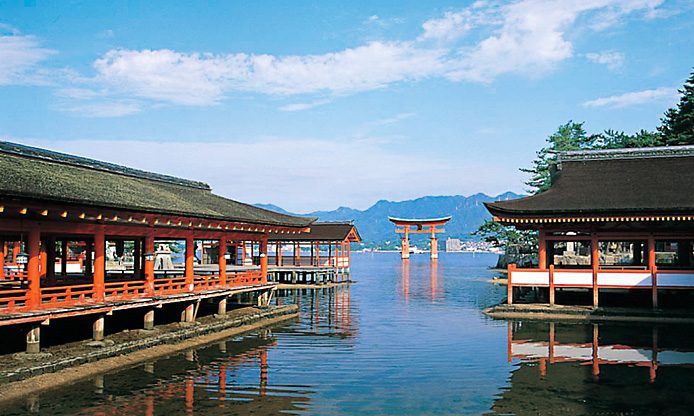 The Itsukushima Shrine at high tide, when it appears to float on the water

The shrine was designed and built on pier-like structures over the bay so that it would appear to be floating on the water, separate from the sacred island, which could be approached by the devout.

Near the main shrine is a Noh stage which dates from 1590.

Noh theater performances have long been used to pay homage to the gods through the ritual acting out of key events in Shinto myth. 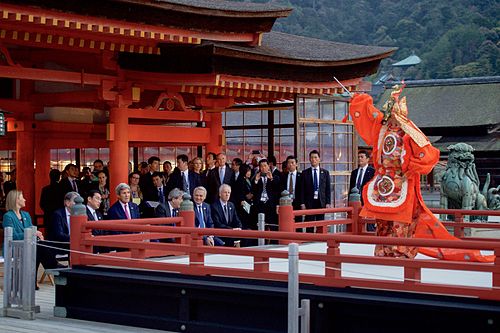 Finally, it’s well worth visiting Itsukushima Shrine during staying in Japan. Have a good time there, Thanks for browsing.