ホーム » Izumo-Taisha (a god of love and the largest shrine)

Hello  everyone how is it going?  Today’s topic is the largest shrine in Japan andit’s “Cool Japan” as a god of love, or a romantic god existing at “Izumo-Taisha“.

Izumo-Taisha has been a very popular shrine as one of Power Spot(Sacred place) among numerous spiritual sites throughout the country.

Power Spot, this is Japanese English word that it means places believed to give visitors some special energy, a spiritual force that heals or refreshes.

Special power of matchmaking for marriage in particular is well-known, that’s why it has attracted unmarried women since olden times.

What’s Izumo-Taisha (a god of love)?

The Izumo region in Shimane Prefecture, which features in Japanese mythology, is home to Izumo Taisha, a shrine with a remarkaly long history.

Shimenawa (enclosing rope) are lengths of laid rice straw or hemp rope used for ritual purification in the Shinto religion.

A space bound by Shimenawa often indicates a sacred or pure space, such as that of a Shinto shrine.

The biggest Shimenawa which measures 13.5meter (about 44ft), 4.4tons (about 8,800lbs) rope used to cordon off consecrated areas at Izumo Taisha

Izumo Taisha is dedicated to Okuninushi no Mikoto, the deity believed to have created Japan. Okuninushi is known as a god of love.

He has been worshipped over the centuries because he’s believed to possess special powers to help people pair up romantically.

According to legend, all of Japan’s gods gather in Izumo every October to hold discussions and make all kinds of arrangements for worldly matters-not just who will marry whom, but also who will get what job and so on.

Even today, a ritual is held at the shrine to welcome the gods from all around the country. The 10th month in the old calendar is known as “the month without gods”, because they’re all away from home.

On the other hand, it’s “the month with gods” in Izumo because all the gods gather there.

It’s thought that the main structure of Izumo Taisha used to be bigger than it is now.

According to an architectural drawing from about 800 years ago, each pillar was made by bundling up three logs, each with a diameter of one meter (3.3 ft). 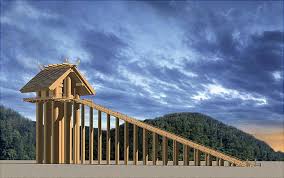 In 2000, the remains of an old structure were discovered. They revealed that the pillars had indeed consisted of giant logs bundled together and confirmed the accuracy of the drawing.

Based on the drawing, experts believe that the structure was 48 meters (157 ft) high and had a ramp 100 meters (328 ft) long. How was it possible to construct a building of such immense proportions so long ago?

Due to its proximity to China and the Korean Peninsula, Izumo was one of the first places in Japan to develop a high level of civilization.

Izumo prospered from the production of iron, and it’s thought that the construction of the enormous shrine was made possible by the area’s wealth.

Izumo Taisha is endlessly fascinating because it’s steeped in mythology and history.