Hi Messrs. ＆ Mses. Japanophiles. how’s it going? At 8pm on June 1st, 2020, stunning fireworks have been on display saying “Cheer Up” to brighten the nation’s mood on the night-sky all over the country.

Why we say “Cheer Up” Fireworks and what purpose?

Fireworks colored the night skies nationwide on Monday, with the hope that the sight would cheer up Japan amid the coronavirus pandemic.

Fireworks displays colored the night skies in Tokyo and other parts of Japan simultaneously on June 1st, 2020, with the hope that the sight would cheer up the nation in the prolonged holing up at home for nearly three months.

The spread of COVID-19 has led to the cancellation or postponement of many fireworks display events in the summer of 2020.

We wondered if there will be something that we could do as pyrotechnicians. 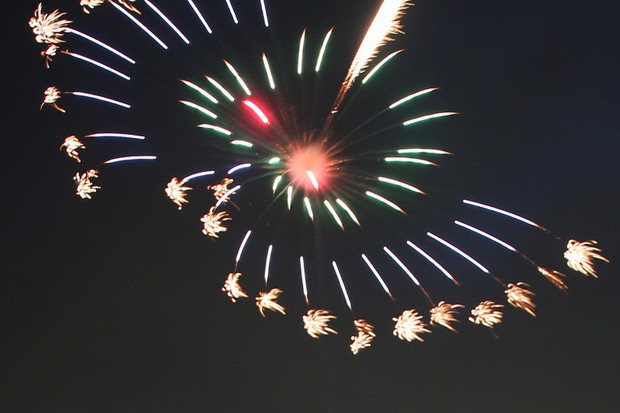 Fireworks in the shape of the plague-fighting folklore character Amabie produced by North Japan Fireworks are seen in Daisen, Akita Prefecture, on June 1, 2020.

With many of the country’s summer fireworks festivals having been canceled or postponed, pyrotechnicians nationwide joined hands to launch the “ Cheer Up! Hanabi (firework) Event ” for a short, surprise fireworks display.

The purpose of Cheer up! HANABI event is to mobilize our creative power and resources as pyrotechnicians to cheer people up by our fireworks.

This could be the most inspiring planning in our industry, because simultaneous fireworks displays will light up the night sky in all 47 prefectures of Japan for the first time.

To avoid drawing crowds, however, the organizers set a five-minute limit for the fireworks.

They initially intended to keep the date, time and locations under wraps but later went public with the date and time amid concerns some people might find the sudden fireworks displays disconcerting.

In Tokyo, the fireworks began without warning at 8 p.m., with bursts of light filling the rainy sky.

Despite the rain, more than two dozen people gathered on the banks of the Tama River located a short walk from Keio-Tamagawa Station. 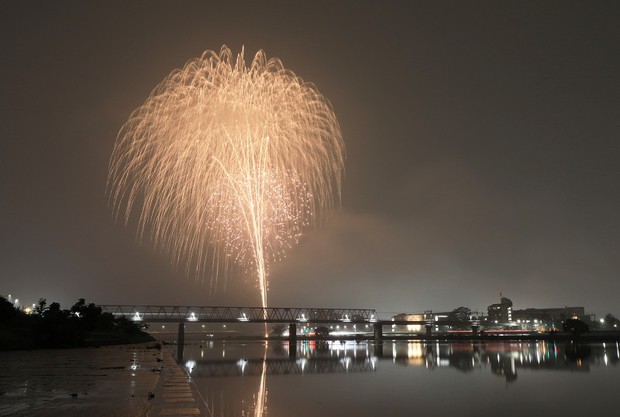 Fireworks set off in Chofu, Tokyo, are seen from Kawasaki’s Tama Ward on June 1, 2020.

“I had a hunch, so I came here,” said Yukiji Kushiro, who was among those eagerly watching the night sky under their umbrellas around 10 minutes before the display began.

“Even though they say it’s a secret, there are only so many places they can launch fireworks.

I live on the Keio Line so I decided to come have a look,” Kushiro said.

A resident of the area also waiting on the banks said a notice had been passed around during a neighborhood meeting, but residents were told to keep the information quiet.

“With coronavirus and everything, they didn’t want too many people gathering,” she said.

“Watching (the fireworks) has reminded me to be thankful for our medical workers,” said Taiji Sato, a 25-year-old company employee. 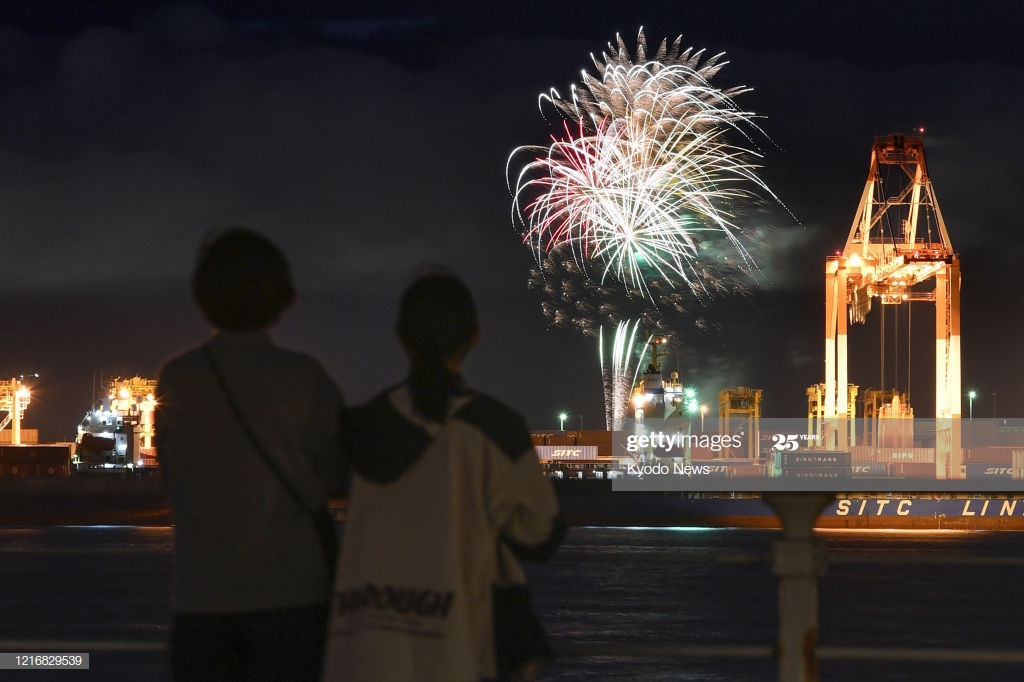 “People are facing tough times now because of the coronavirus. So we decided to do what only we can do, which is to set off fireworks in the hope of providing encouragement,” said 38-year-old Kohei Ogatsu, director of the Tokyo-based Marutamaya Ogatsu Fireworks Co.

“As we face gloomy news due to the virus, people often tend to look down but when fireworks are set off, we look up. I hope we can help people do just that,” he said.

His company set off the fireworks on the banks of the Tama River.

Ogatsu was one of 11 people taking the lead in the project. The idea was conceived in April and early last month the organizers sent a fax to about 300 companies detailing their plans.

About 160 firms nationwide expressed a desire to participate.

“The fireworks also carry our wish for the coronavirus outbreak to be contained,” said Ogatsu, whose firm dates its founding to 1864 and is one of the companies involved in the Sumida River summer fireworks festival.

Ogatsu added that fireworks in Japan began as a response to an epidemic. The first event, he said, was held in 1733 following an outbreak of cholera to pray for the souls of those who died and for an end to the disease. 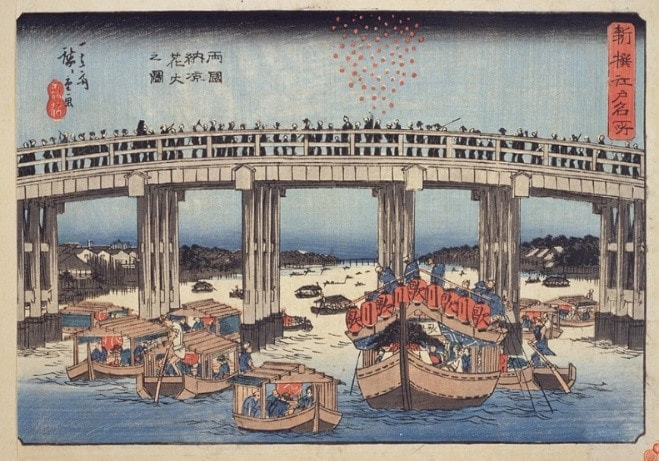 What’s the significance or importance of firework ?

Fireworks displays are used to mark so many important occasions the world over.

They fascinate the spectator with vivid and colorful lights and its sound reverberates through everyone’s heart and body. Fireworks displays are loved as entertainment by people all over the world.

We embrace the fireworks but not just as entertainment. It’s a part of Japanese culture – HANABI(firework).

Because HANABI is also held on the occasion of repose of souls and reconstruction after the disaster, therefore HANABI evokes various emotions of the people. 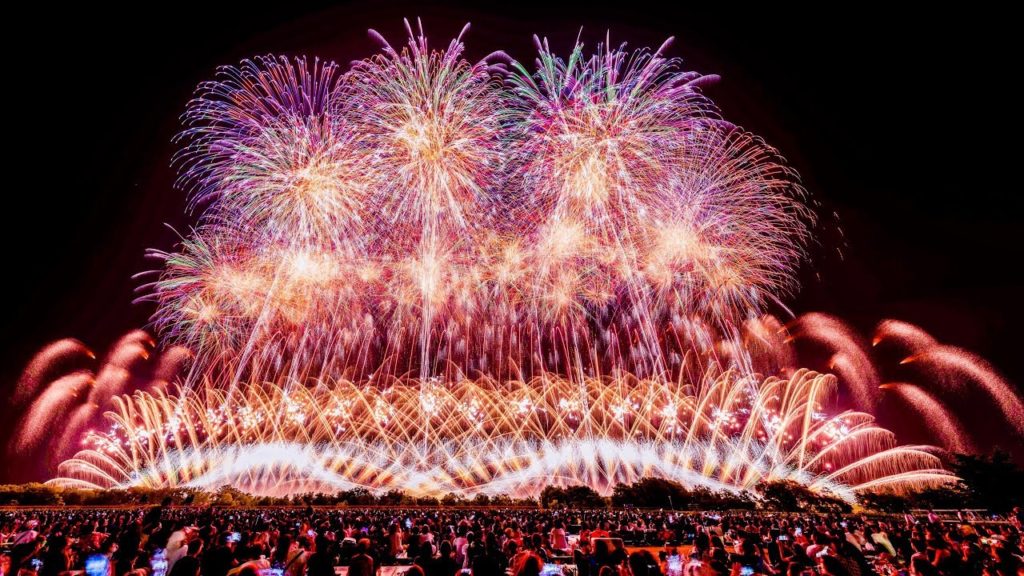 We’d like to introduce our culture to the world and cheer people up by Cheer up! HANABI.

The outbreak of COVID-19 has created a global crisis that has had a deep impact on the way we perceive our world and our everyday lives.

Our industry, like others, is experiencing the disruptive impact, nevertheless we built a strong network to accomplish this planning.

We believe this HANABI unites us all even stronger and inspire people to create a brighter future.

All pyrotechnicians supporting Cheer up! HANABI launch fireworks displays at the same time, on the same date, in all Japan for people all over the world in hopes for end to COVID-19 and a brighter future.

Finally, we have a website “Firework” which will be well-worth browsing, thanks