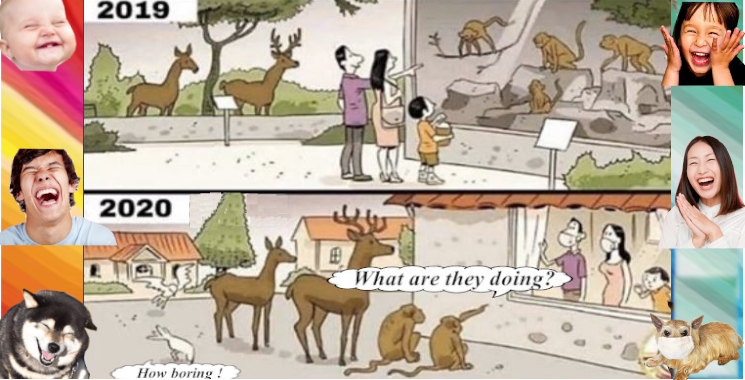 How suffocating we are now ! Hel・・hello ! How’s your breath treating you? That’s because this hard-breathing phenomena come from two factors, one which is we are confined in a small room all day and the other from wearing face mask covering our nose and mouth.

For what is in need of face mask ?

We are advised to wear the facial mask to prevent a spray of spittle from your mouth when you cough or sneeze in crowded area.

And this is doubt or I’m not sure as the virus is invisible but we feel like stopping the virus from entering the lungs through our mouth and nose when we inhale.

So let’s banish a state of lethargy!

Let’s refresh ourselves by laughing?

When we can’t get face masks, followings are recommendable ideas to survive, do you agree?

These are the most advanced, super newest wearable masks only.

Have you found your most-favorite mask in the aboves?

What is your choice for the person most likely to survive?

Well, Good luck with the most fancied mask ! 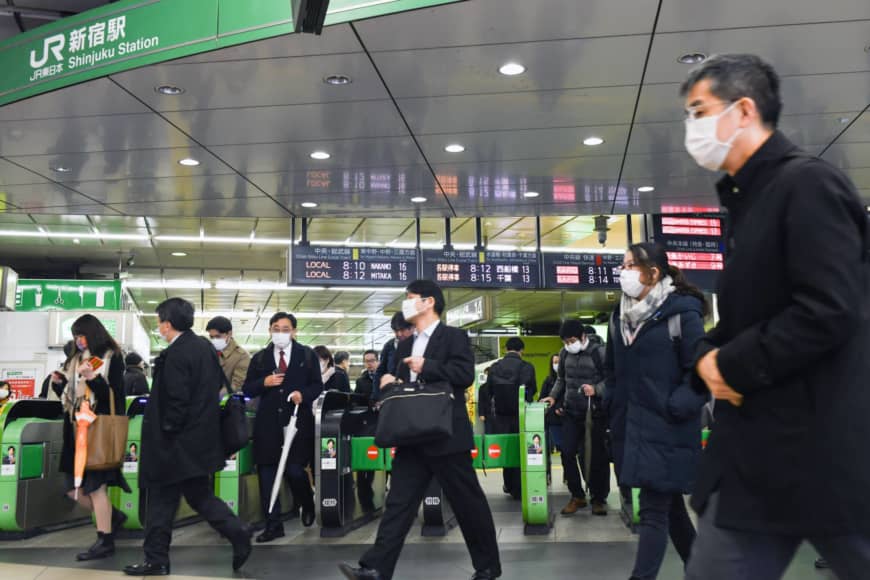 Japans coronavirus numbers have been ticking up, sparking alarm that it could be the next major country to see an explosive jump in infections.

Its also raising questions about whether Tokyo is about to go into a European-style lockdown — speculation the government is trying to squash.

Only 30 percent in Japan practice social distancing while talking

Only 30 percent of people in Japan avoid having conversations at close distance as a preventive measure against the spread of the new coronavirus, a national survey has found.

The survey was conducted jointly by the health ministry and Line Corp. for two days through Wednesday, covering some 83 million users of the company’s free messaging app. Valid answers were given by some 24 million users.

People in Japan have yet to sufficiently avoid being in close proximity with each other, officials at the ministry said, noting that the absence of adequate distance enhances the risk of infections.

Asked about the preventive measures against infections that they’ve adopted, with multiple answers allowed, 85.6 percent, the largest group of respondents, said they wash their hands, gargle and disinfect their hands and fingers.

He was speaking from a conference room in the Prime Minister’s Office filled with officials, security guards and a gaggle of photographers, not to mention a group of reporters sitting elbow to elbow in the entire front row.

Many watching the live broadcast couldn’t help but notice the irony playing out beyond the screen, taking to social media to point out how his news conference was the exact embodiment of the “Three Cs” — closed, crowded and close-range conversations — that the government was urging the public to eschew.

With the COVID-19 pandemic showing no signs of abating in Japan, government and ministry officials are scrambling to rectify the high-risk nature of their news conferences.

Some have reduced seating capacity, booked more spacious rooms and even installed thermographic cameras to bar reporters with fevers. But others have been less successful.

Japanese officials say Tokyo is at risk of an ‘overshoot,’ but what exactly does that mean?

There has been much talk in Japan recently about the imminent danger posed by an “overshoot,” a word used with no Japanese translation, little context and an apparent disregard for the English language, baffling English and Japanese speakers alike.

Of the many Japanese politicians, experts and journalists who have adopted the word as part of their virus lexicon, few seem to have taken a moment to ponder what it actually means or where it comes from.

In normal contexts, to overshoot means to shoot or pass over or beyond a target, like when an aircraft flies beyond a runway while trying to land.

According to the health ministry, “overshoot” means an explosive spike in coronavirus infections in which the number of patients doubles within two to three days. Officials fear “overshoot” will lead to the collapse of the health care system.

In Tokyo, the number of infections has grown more than sixfold over the past two weeks, but government officials maintain that an “overshoot” has not occurred here or anywhere else in the country.

Japan state of emergency to cover Tokyo, Osaka and five other prefectures 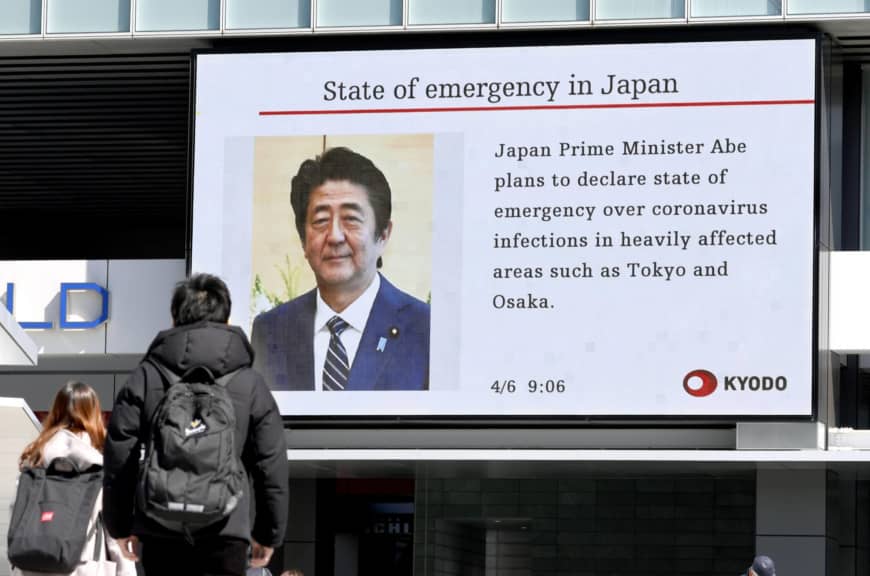 People walk by a big screen in the Akihabara district of Tokyo on Monday broadcasting news that Prime Minister Shinzo Abe is set to declare a state of emergency over the growing spread of COVID-19 in Japan.

A state of emergency is set to be called as early as Tuesday in areas of Japan most heavily hit by the spread of COVID-19. But how will life change for residents?

What will life in Japan under a state of emergency look like?

In practice, not as much as you might think. People will be instructed to stay at home except to carry out important tasks such as purchasing food and daily supplies, or seeking medical care.

Working from home will be encouraged but not mandatory.

Essential businesses such as supermarkets, convenience stores and pharmacies will remain open, and the government has given assurances that there is no need to panic buy or hoard everyday necessities like toilet paper.

“We’re asking for the public’s cooperation in reducing person-to-person contact that could lead to transmission” of the coronavirus, Prime Minister Shinzo Abe told reporters on Monday.

Places where people gather in large numbers such as theaters, concert halls, and sports stadiums may be ordered to close and major events canceled or postponed.

Tokyo and other densely populated areas have been acting in anticipation of such measures, with many stores and restaurants shuttering on their own accord on weekends and far fewer people on the streets than usual.

Many schools have already decided not to resume classes until the Golden Week holidays end on May 6, the same day the state of emergency is expected to be lifted.

Nurseries and care facilities for the elderly, which have so far remained open, may also be asked to close.

Public transportation will continue to operate, although there may be changes to schedules or reduced services depending on demand.

East Japan Railway Co. reported a 30 percent drop in passengers on Tokyo’s Yamanote Line on the weekend of March 28 to 29, when Gov. Yuriko Koike asked the capital’s 14 million residents to stay home. She made the same request for the following weekend.

Under the revised law that gives the prime minister the power to declare a state of emergency, the government can make “comprehensive arrangements” with “designated public organizations” such as railway operators, utilities and public broadcaster NHK, but it does not say that services can be stopped altogether.

“Transportation is important infrastructure that supports people’s lives and economic activities. We must maintain its function,” transport minister Kazuyoshi Akaba has said.

Meanwhile, the number of international and domestic flights in Japan has plunged as people avoid traveling for fear of COVID-19.

An airline official said regardless of whether a state of emergency is declared, decisions regarding flight schedules would continue to be driven by how much demand there is.

In the financial sector, Japan Exchange Group Inc. CEO Akira Kiyota has confirmed that in principle, trading on the Tokyo Stock Exchange will continue as usual. Banks and other financial institutions will also remain open.

A big difference between Japan and other countries battling the coronavirus is that authorities here have little legal power to enforce a strict lockdown. The revised law does not provide for any penalties for ignoring instructions to remain at home.

In the United States, many states have ordered people to remain at home unless they are carrying out essential tasks, and to stay a couple of meters from others.

France, which is among the most heavily hit countries in Europe, has been under a stringent lockdown since March 17.

Armed soldiers and police officers patrol the streets and people who repeatedly venture out without a good reason can be fined up to €3,700 (about ¥435,000).

On Monday, Abe stressed that Japan will not impose a lockdown like some other countries have done.

While people will only be requested by authorities to remain at home, Tetsuro Kawamoto, a former Doshisha University law professor, said most are likely to comply.

“It may be necessary to create penalties if the coronavirus situation continues for a long time, but that would be a last resort,” Kawamoto said. 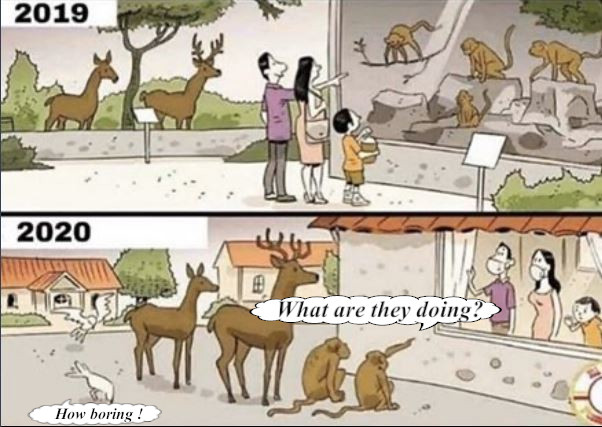 Finally, we have another clear away the cobwebs “Let’s be refleshed with fantacy Manga, Anime “Demon Slayer” from anxiety of Coronavirus“, thanks