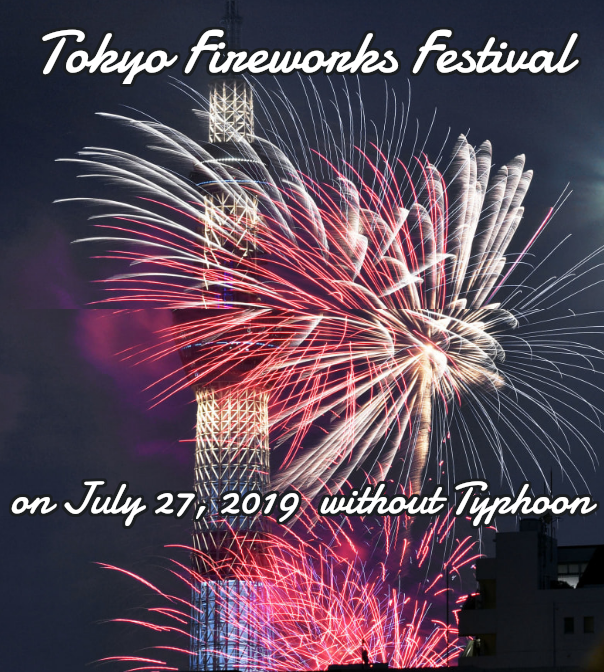 According to the report of the meteorological agency, actually, Typhoon No.6 is approaching Tokyo on July 27, 2019 which has quite concerned us since a couple of days ago.

Fortunately, however, no Typhoon, no rain came to Tokyo and the organizer say 959,000 viewers visited the venue and all spectators have totally enjoyed seeing colorful and boisterous illuminations.

From when has Tokyo Fireworks begun?

The oldest fireworks display recorded in history was the “River of the two Countries”, which began in 1732 in the Edo (present Tokyo) period.

This is the root of the Sumida River fireworks display, which was held in prayer for remembrance and the disease withdrawal because there were many victims due to starvation and the plague.

So this Event has been held annually for nearly 300 years long history.

“Reiwa” the first event, about 20,000 fireworks were prepared, and colorful large wheels dyed lit up the night sky.

The impact of Typhoon No. 6 was feared, but when the launch started around 7 p.m., cheers of “Oh” and “Ah” when fireworks exploded over the sky.

We were oohing and aahing heard every moment new distinctive originalities went up to burst in the night sky.

Along the Sumida River, families and couples were drinking and taking pictures of colorful sky.

One of spectators admired shouting cheerfully “It’s amazing!  Amazing as they were like pageant show in the sky for almost non-stopping two hours”.

Finally, the video quoted from the Japan Times

For further stories of fireworks, please browse “Hanabi(Fireworks)“. Thanks