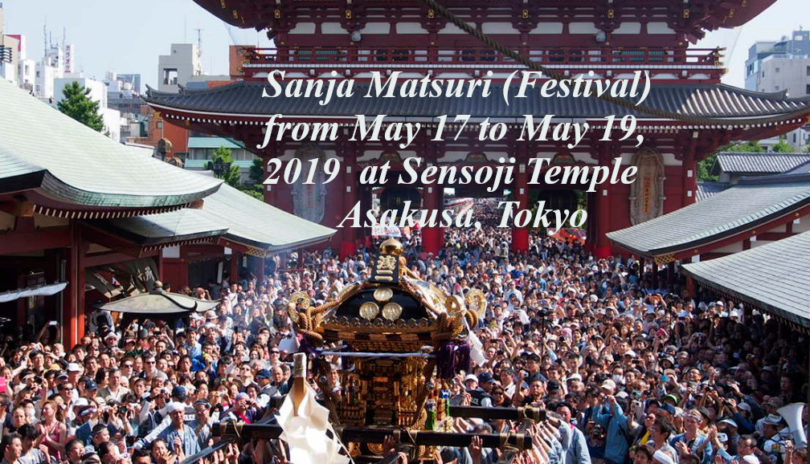 Hi  Messrs. ＆ Mses. Japanophiles.  how are you doing? There was an annual grand festival “Sanja Matsuri” which is one of “Cool Japan” was held from on May 17, Friday to May 19, Sunday in 2019 for three consective days.

“Sanja Matsuri(Festival)”, literally (Three Shrine Festival), is one of the three great Shinto festivals in Tokyo. It is considered one of the wildest and largest.

What’s and from when the Sanja Matsuri ( Festival ) ?

The festival is held in honor of the three men who established and founded the Sensō-ji Buddhist temple. Sanja Matsuri is held on the third weekend of every May at Asakusa Shrine.

Its prominent parades revolve around three mikoshi (portable shrines referenced in the festival’s name), as well as traditional music and dancing.

Over the course of three days, the festival attracts 1.5 to 2 million locals and tourists every year.

A Portable Shrine “Mikoshi” itself weighs 1 ton (abt 2,200lb) is carried about 100 participants. 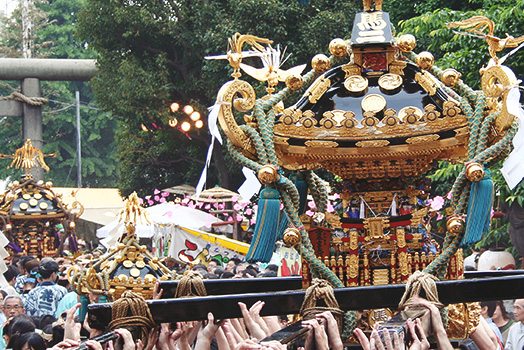 Like many Japanese festivals, Sanja Matsuri is a religious celebration. It is a weekend-long Shinto festival that is dedicated to the kami (spirits) of three men.

The Sanja Matsuri appears to have many forms that date back as early as the 7th century, as well as several names such as “Kannon Matsuri” and “Asakusa Matsuri”.

Sanja Matsuri’s present day form was established during the Edo period. In 1649, shōgun Tokugawa Iemitsu commissioned the construction of Asakusa Shrine, a Shinto shrine dedicated to the three kami.

The existence of this shrine helped to solidify the festival’s importance as well as its current structure and organization.

Religious in origin, Sanja Matsuri is primarily a festival of celebration. The atmosphere around Asakusa during the weekend of the festival is charged and energetic.

People continuously flood the streets surrounding the Sensō-ji and flutes, whistles, chanting and taiko (traditional Japanese drums) can be heard throughout the district.

The festival’s main attractions are three Asakusa Shrine-owned mikoshi that appear on the third and final day of the festival.

Decorated with gold sculptures and painted with gold leaf, each mikoshi weighs approximately one ton and cost ¥40 million ($390,760) to construct.

They are carried on four long poles lashed together with ropes, and each needs approximately 40 people dispersed evenly to safely carry them. Throughout the day, a total of about 500 people participate in carrying each shrine.

This action is believed to intensify the power of the kami that are seated in the shrines and helps to bestow good luck upon their respective neighborhoods.

It is not unusual for there to be someone standing on the poles supporting the mikoshi shouting and waving in order to help direct the people carrying the shrine.

This sense of direction can be essential when trying to keep the one ton mikoshi from accidentally colliding with street-side shops and causing considerable damage.

While the three primary mikoshi are the most important objects roaming the streets during the Sanja Matsuri, approximately 100 other smaller mikoshi are paraded through the neighborhood on Saturday.

Of these shrines, several are solely carried by women or small children. 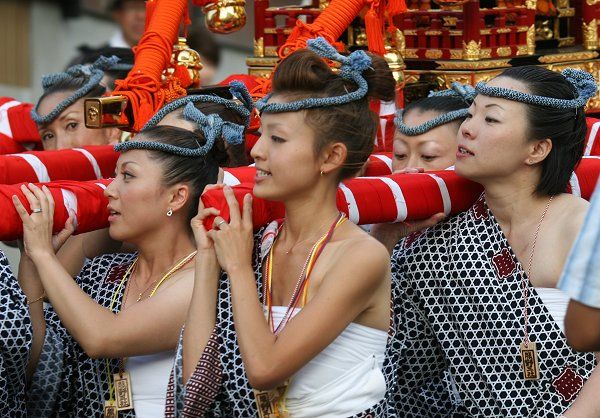 The festival’s more publicized beginning starts on Friday when the Daigyōretsu (literally “large parade”) is held.

This famous 19-block grand procession down Yanagi Street and Nakamise-dōri to Asakusa Shrine is an event that is used to energize the community.

It is most known for its participants’ lavish costumes, such as heron-hooded dancers, geisha and city officials wearing hakama (traditional Japanese clothing).

Musicians, performers and dancers also parade down the streets of Asakusa in traditional Japanese attire during the procession.

In the evening, six mikoshi from the most central neighborhoods are sent parading through the streets on the shoulders of several dozen people.

On the following day, Saturday, approximately 100 mikoshi from the 44 Asakusa districts gather at the Kaminarimon.

They are then paraded through Nakamise-dōri and stop at the Hōzōmon where they pay their respects to Kannon, the Goddess of Mercy.

Afterwards, the mikoshi are carried to Asakusa Shrine where Shinto priests bless and purify them for the coming year.

When the ceremony is completed, they are then carried back and paraded through their respective neighborhoods.

Sanja Matsuri’s most important events occurs on the following Sunday. The procession of the three Asakusa Shrine-owned mikoshi begin their march down Nakamise-dōri toward the Kaminarimon early Sunday morning.

These three elaborate shrines honor and represent the three men responsible for founding the Sensō-ji.

During this final day of the festival, these important mikoshi are split up in order to visit and bestow blessing to all 44 districts of downtown and residential Asakusa.

When evening falls, the three shrines find their way back to Asakusa Shrine in another grand procession that lasts late into the night.

In addition to the traditional events, Sanja Matsuri has several other popular draws. For example, festival goers can visit hundreds of shops found in the Nakamise, a street connecting the Kaminarimon and the Hōzōmon.

Many small food stands are also erected in the surrounding areas for the entire weekend. Yakuza members also proudly show off their tattoos. 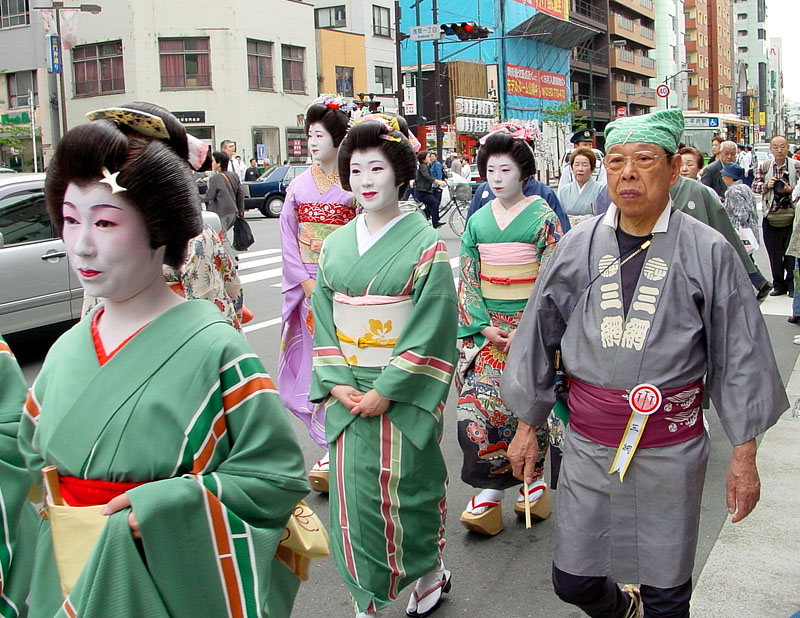 On Saturday and Sunday, Geisha that don their traditional attire put on performances from 1–3 p.m. on the second floor of the Asakusa Kenban.

These performances, which require visitors to purchase tickets, have been ranked as one of the 10 best Geisha shows in all of Japan.

Finally, we have much more information on Matsuri, Festival in Japan