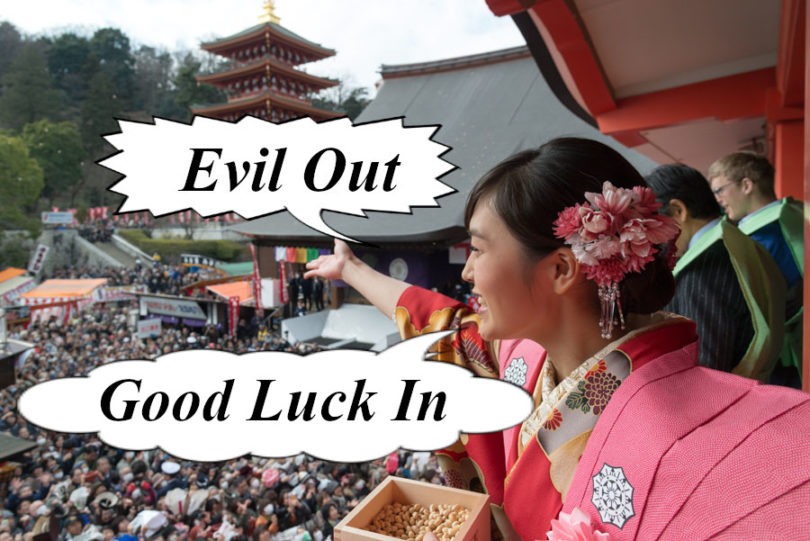 On February 3 of every year, it is “Setsubun“ Day. the name of which literally means “seasonal division”.

Hi  Messrs. ＆ Mses. Japanophiles.  how are you? Today, as I mentioned it’s Setsubun Day, meaning “seasonal division” the day before the beginning of spring.

When I was a child, on the day of Setsubun, we used to throw beans toward father who was disguised as the demon, shouting 「Oni(demon/devil) wa Soto(outside), and「Fuku(fortune) wa Uchi(inside)」.

Unfortunately, however, these days I can hardly see such a scenery in the area where I live now in Tokyo.

The term refers to the spring Setsubun, properly called Risshun（the beginning of spring) celebrated yearly on February 3 as part of the Spring Festival.

It was a little warm today in Tokyo and Tokyo area, on the other hand, however, in fact, heavy snow and blizzards hitting mainly the northern areas and along the Sea of Japan and what worse, the Meteorological Agency critically warning the coldest weather sweeps over the archipelago from now on.

Weather aside, in its association with the Lunar New Year, spring Setsubun can be and was previously thought of as a sort of New Year’s Eve, and so was accompanied by a special ritual to cleanse away all the evil of the former year and drive away disease-bringing evil spirits for the year to come.

This special ritual is called Mamemaki
(“bean scattering/throwing”). Setsubun has its origins of a Chinese custom introduced to Japan in the eighth century.

The custom of mamemaki first appeared in the Muromachi period (1336-1573). It is usually performed by the toshiotoko of the household (the male who was born on the corresponding animal year on the Chinese zodiac), or else the male head of the household.

Roasted soybeans (called “fortune beans”) are thrown either out the door or at a member of the family wearing an Oni (demon or ogre) mask, while the people say “Demons out! Luck in!” (Oni wa soto! Fuku wa uchi!) and slam the door.

This is still common practice in households but many people will attend a shrine or temple’s spring festival where this is done. The beans are thought to symbolically purify the home by driving away the evil spirits that bring misfortune and bad health with them.

The gestures of Mamemaki look similar to the Western custom of throwing rice at newly married couples after a wedding.

At Buddhist temples and Shinto shrines all over the country, there are celebrations for Setsubun. Priests and invited guests will throw roasted soy beans (some wrapped in gold or silver foil), small envelopes with money, sweets, candies and other prizes.

In some bigger shrines, even celebrities like actors, actress and sumo wrestlers will be invited; these events are televised nationally.

This is from The Asahi Newpaper: NARITA, Chiba Prefecture–Kabuki star Ichikawa Ebizo, yokozuna Hakuho and actors in a TV period drama threw beans during a ceremony at Naritasan Shinshoji temple here on Feb. 3 to pray for a bumper crop.

Scattering beans at “setsubun,” the last day of winter in the traditional lunar calendar, is a custom practiced at shrines, temples and homes. The bean tossing is believed to drive out demons and attract good fortune.

About 60,000 visitors flooded the temple as setsubun fell on a warm and fine Sunday.

At Sensō-ji in the Asakusa neighborhood of Tokyo, crowds of nearly 100,000 people attend the annual festivities.

It is customary in Kansai area to eat uncut Makizushi called Ehō-maki (lit “lucky direction roll”), a type of futomaki (“thick, large or fat rolls”), in silence on Setsubun while facing the year’s lucky compass direction, determined by the zodiac symbol of that year.

This custom started in Osaka, but in recent years Eho-maki can be purchased at stores in the Kanto area and it is getting more recognized as a part of Setsubun tradition. 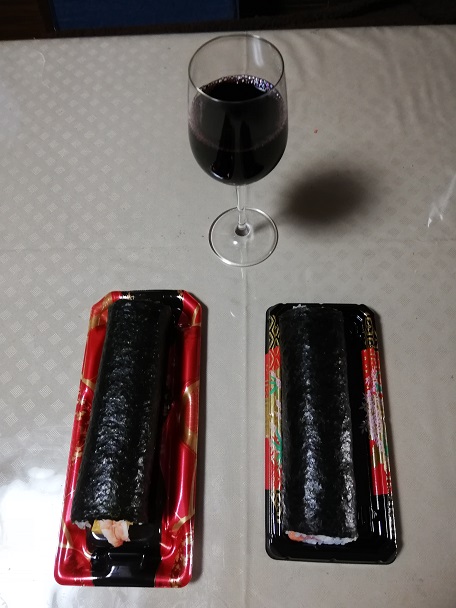