ホーム » What is the Chrysanthemum (Kiku in Japanese) that represents Japan? 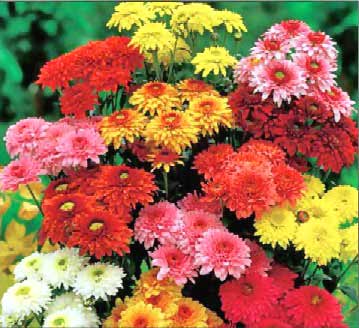 Today’s theme is Chrysanthemum (Kiku), of which are said to be some of the most popular flowers in the world, next only to the Rose.

Hello  everyone how are you doing? When it comes to the enjoyment of viewing the autumnal flower of “Kiku” which is said to be one of “Cool Japan”, you can’t beat it.

We agree totally to its beautiful flower, of course, however, what’s more important mention is that it is used the motif of Chrysanthemum on the cover of our passport. 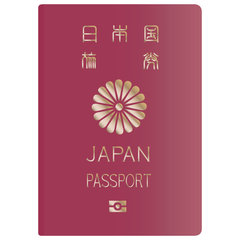 What’s Chrysanthemum and its characteristics?

This name was given to it by Carolus Linnaeus, a Swedish naturalist who is also known as the father of modern taxonomy.

Its flowers bloom in various forms, and can be daisy-like, decorative, pompons or buttons. Chrysanthemum blooms come in a huge variety of shapes and sizes and in a wide range of colors.

In addition to the traditional yellow, other popular colors are white, purple, and red.

Chrysanthemums have a wealth of meaning associated with them and therefore they are very popular as florist flowers.

A white one symbolizes truth and loyal love

A yellow one symbolizes slighted love

“Kiku” in Japanese (chrysanthemum) is the crest of Japanese Imperial Houshold

In the early 13th century, one of the greatest admires of chrysanthemum motifs was the retired emperor Go-Toba who used them on all kinds of items.

It said that he engraved it on this sword himself. And it was because of this that a chrysanthemum design came to be used for the Imperial Family crest. 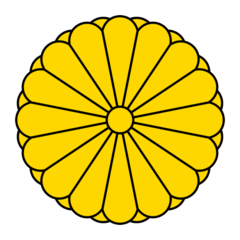 At the same time, chrysanthemums have also long been admired for their beauty and elegance, and they became a popular motif for clothes and furnishings in various field of industry as well. 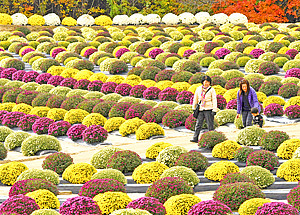 Chrysanthemums are well suited for container gardening in patios. It flavored tea is very popular and is used as a relaxant.

Chrysanthemums are a simbol of autumn in Japan, why?

The Chrysanthemum was brought to Japan by Buddhist monks in AD 400. The japanese have long enjoyed these flowers by cultivating them using various methods and shaping them into unique forms.

These are known as “atsumono”. They have globular flower heads composed of many petals. 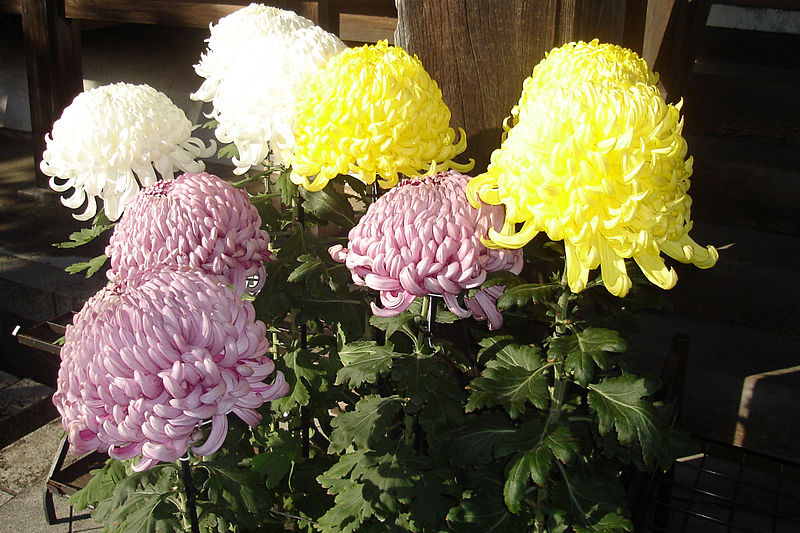 To arrange the petals like this demands meticulous care. Once a flower begins to bloom, the grower uses special carved sticks to train the petals upwards.

The painstaking work gives the flower its unique look, with all of its 300 or so petals pointing upwards in perfect alignment.

Chrysanthemums originally came from China, and there’s a Chinese legend about them. One day, a boy was writing a sutra on a chrysanthemum leaf, and some dew spilled off the leaf.

He drank it and went on to live for 800 years without ever losing his youthful apperance.

This legend made its way to Japan, and chrysanthemums came to be associated with rejuvenation and longevity. The 9th day of the 9th month, according to the old calendar, is Chrysanthemum Day.

In the old days, people would cover chrysanthemums with floss silk, moisten it with dew, and then wipe their bodies with it.

The best of the best was called the “100-variety chrysanthemum”. It was made by grafting 100 differenct varieties of chrysanthemum onto a single plant.

Chrysanthemums have always been loved for their elegance, and the Japanese have continued to refine them with scrupulous care. 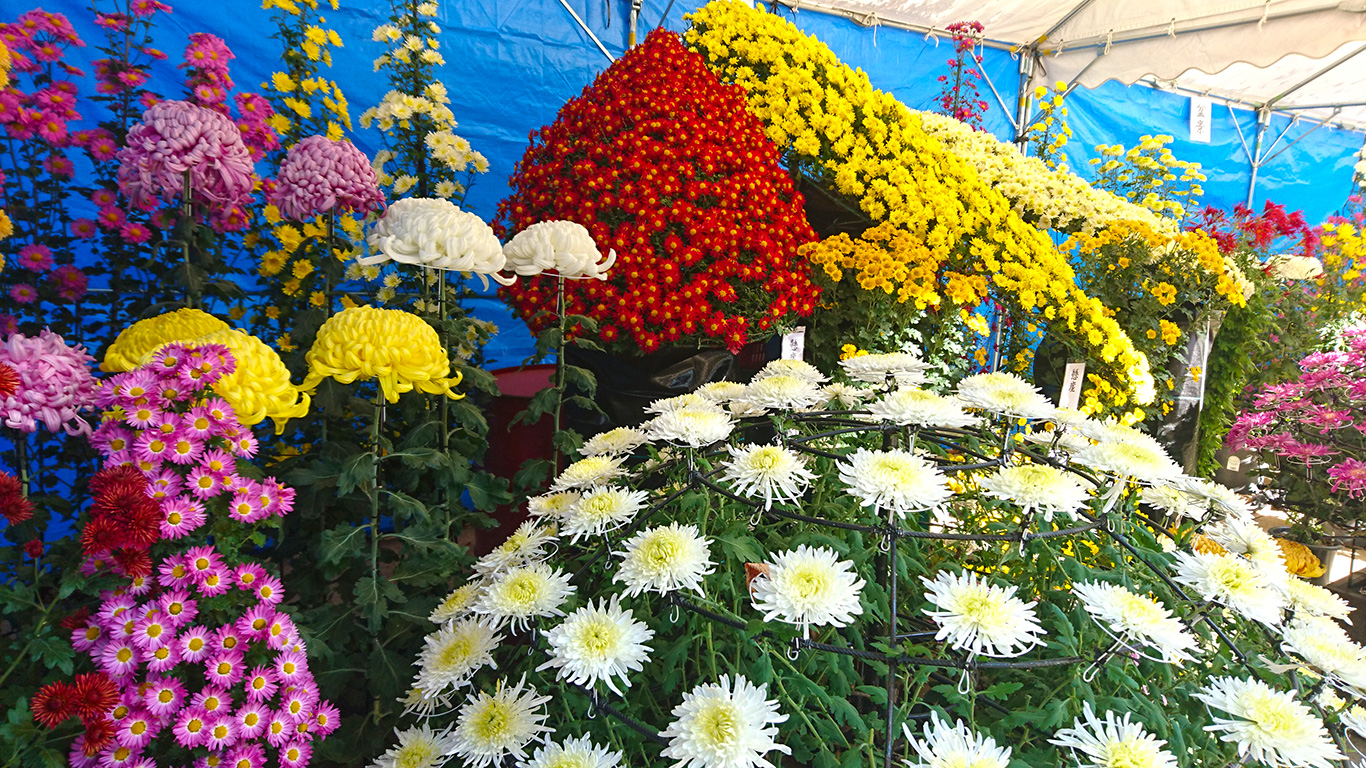 Finally, when it comes to the viewing Chrysanthemums in autumn , you can’t beat it, but we have another viewing the beautiful flowers, that’s “Ohanami” (viewing Cherry blossom), please enjoy browsing it, thanks