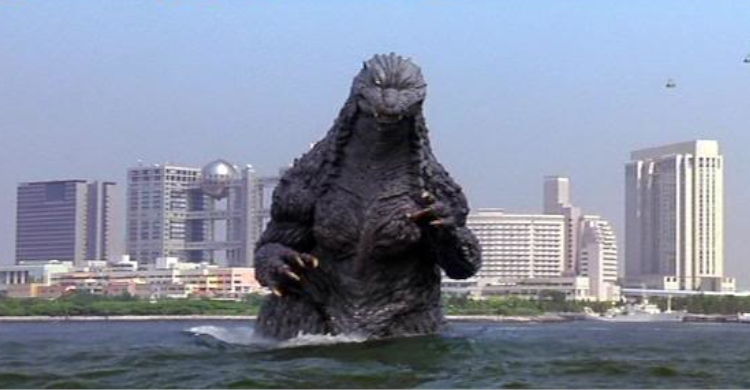 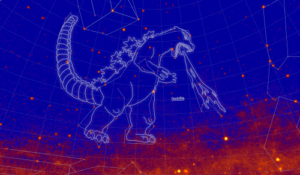 New, unofficial constellations including Godzilla appear in this image of the sky mapped by NASA’s Fermi Gamma-ray Space Telescope. (Image courtesy of NASA)

Iconic monster Godzilla and Japan’s Mount Fuji are among a set of unofficial, modern constellations announced on Oct. 18 by scientists with NASA’s Fermi Gamma-ray Space Telescope.

The 21 constellations were constructed from gamma-ray sources in the sky, to celebrate the 10th year in operation of the Fermi Gamma-ray Space Telescope. Gamma rays, with their extremely short wavelength, are the highest energy light in the universe.

The telescope allows the mapping of the sources of these rays which are not visible to the naked eye.

Fermi project scientist Julie McEnry at NASA’s Goddard Space Flight Center in Greenbelt, Maryland, on the U.S. East Coast, said of the constellation project in a press release, “Developing these unofficial constellations was a fun way to highlight a decade of Fermi’s accomplishments.”

Fermi’s large area telescope has been scanning the sky since 2008 and mapping and measuring gamma ray sources.

These can include pulsars, which produce beams of electromagnetic radiation, and powerful explosions called gamma-ray bursts.

Constellation project leader Elizabeth Ferrara at the Goddard center said in the same release that by 2015, the number of sources mapped by the large area telescope had expanded to about 3,000.

“For the first time ever, the number of known gamma-ray sources was comparable to the number of bright stars, so we thought a new set of constellations was a great way to illustrate the point.”

Other gamma-ray constellations include the TARDIS time machine from “Doctor Who” and the USS Enterprise from “Star Trek,” as well as one of Albert Einstein. (quoted from the Mainichi on Oct19, 2018)

Hi everyone, how are you doing?

Today’topic is Godzilla which has already been known globally as giant and powerful monsters appeared all over the world and destroyed humanity wreaking havoc of everything. 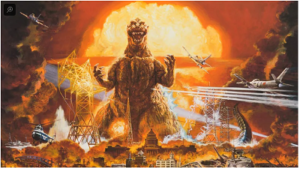 A Kaiju (Japanese Monster); Godzilla created by the Toho Co in Japan and released by Toho in 1954.

Godzilla, we said Gojira when I was a child, say around 60 years ago, attacked only big cities like Tokyo, Japan. 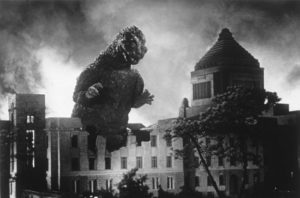 Attacking the Diet Building and at that time, it was not a color movie but a black and white one.

The original introduced the work of special effects master Eiji Tsuburaya, who used miniatures and “suitmation” to convey the large scale of the monster and its destruction.
And the most striking feature of this movie is its special effects movie.

The first film, Godzilla, became an influential classic of the genre. It featured political and social undertones relevant to Japan at the time.

The original also introduced an acclaimed music score by Akira Ifukube, which was reused in many of the later films.

First, what’s Godzilla and from where Godzilla came?

Godzilla is a giant dinosaurian creature that has been preserved into the modern era through unknown means, only to be awakened and mutated by atomic weapons testing by the US military in the 1950s.

The immense beast is not pleased at being roused from the depths of the ocean and attacks humanity.

The behemoth sinks ships, flattens cities and effortlessly shrugs off the counterattacks of mankind’s armed forces.

In addition to its huge size and seeming invulnerability, the monster also exhales a radioactive heat ray from its mouth like an atomic-age dragon.

Originally towering over Tokyo at 50 meters (164 feet) tall, Godzilla’s size has increased to as much as 100 meters (328 feet) in later movies. Godzilla’s basic appearance is that of a bipedal dinosaur with a tyrannosaurus-like head, large muscular arms, and several rows of spiky fins running down the length of his back to the tip of his tail.

Other features with history of the movie Godzilla

Godzilla was originally intended to be a metaphor for nuclear and atomic weapons used on Japan and throughout the world. So far, there have been 26 Godzilla movies made in three different eras.

The supposed final movie for 5 to 10 years is coming out in December of 2004. It is called “Godzilla: Final Wars” and features a large cast of Godzilla fin favorites, including Mothra, Rodan, and Angilas, and one new Kaiju, Called Monster-X.

Godzilla has over 98% universal awareness. His fans range throughout all ages, from the very young to the very old.

Despite minor changes in design, this generally consistent image over the decades has contributed to Godzilla becoming one of the most recognizable movie monsters in the world.

It is, therefore, recognized by Guinness World Records to be the longest continuously running movie franchise, having been in on-going production from 1954 to the present day, with several hiatuses of varying lengths.

The film franchise consists of 33 films, 31 produced by Toho and 3 Hollywood films.

For its North American release, the film was reworked as an adaptation and released in 1956 as Godzilla, King of the Monsters!.

The adaptation featured new footage with Raymond Burr edited together with the original Japanese footage.

Finally, please watch the following video in which many opponents appear against Godzilla.