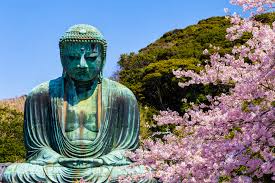 Today’s topic is the Old Capital in the East, “Kamakura”, not Kyoto, which is in the West.  Hello, Messrs. ＆ Mses. Japanophiles. how are you?

Kamakura has been registered as a tentative UNESCO, cultural world heritage site since 1992, along with Hikone-castle in Shiga-prefecture.

Kamakura, “Home of the Samurai” is a grouping of historic sites concentrated in and around the Japanese city of Kamakura, near Tokyo.

The city gave its name to the Kamakura shogunate which governed the country during the Kamakura period (1185-1333).

In 1992 the monuments were submitted jointly for inscription on the UNESCO World Heritage List.

In January 2012 it was announced that the Japanese government would formally submit the Kamakura site, along with Mount Fuji, for consideration by the World Heritage Committee in 2013.

The request was considered by the World Heritage Committee at its 37th session in Phnom Penh, Cambodia in September, 2013.

ICOMOS recommended not inscribing the site on the List, stating that the historical aspects of the site had largely been supplanted by the modern city that grew up around it and thus the site lacked the integrity necessary to be considered.

The request for World Heritage status was duly withdrawn by Japan.

Most ideal place, a day trip from Tokyo ←→ Kamakura

About an hour by train from Tokyo, Kamakura is a beautiful seaside city with a great sense of history. It abounds with old shrines and temples.

One of the prestigious shrine among many historical buildings being situated in the middle of the city center is Tsurugaoka Hachimangu Shrine. For centuries, it was venerated as the home of gods of war.

Tsurugaoka Hachimangu Shrine can be reached from Kamakura Station either through the busy Komachi-dori shopping street, or along the Dankazura, a pedestrian path in the center of Wakamiya Oji Street that is lined with several hundred cherry trees.

Via either route, the walk from Kamakura Station to the shrine takes about 10-15 minutes. 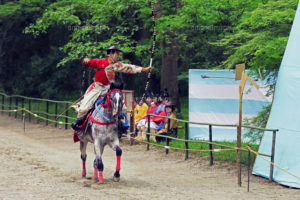 Once a great fortress town thanks to the surrounding mountains and open sea, this is the reason for that was the geography as it is surrounded by hills and the sea, which formed natural fortifications. 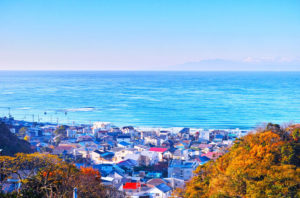 And the only civil engineering work done to the hills that surrounded the city on three sides was to create a few narrow paths through them. Some of them have been left virtually untouched to this day.

It is now thriving city filled with quaint shopping streets, stunning temples and peaceful shrines, along with the famous Buddha of course.

The town became the political center of Japan, when Minamoto Yoritomo chose it as the seat for his new military government in 1192. The Kamakura government continued to rule Japan for over a century, first under the Minamoto shogun and then under the Hojo regents. 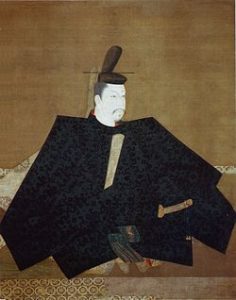 After the decline of the Kamakura government in the 14th century and the establishment of its successor, the Muromachi government in Kyoto, Kamakura remained the political center of Eastern Japan for some time before losing its position to other cities. 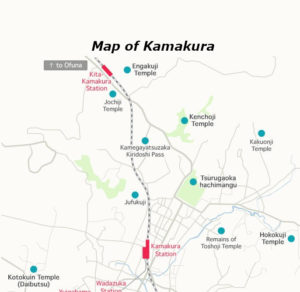 Even in modern-day Kamakura, there are many temples that evoke the character of Kamakura’s time as the capital, as well as places to try Zen meditation and participate in tea ceremonies. 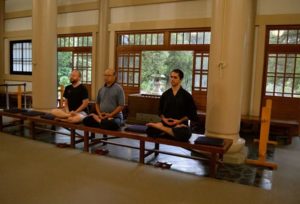 the symbol of Kamakura, The Great Buddha

The Great Buddha statue of Kotokuin Temple is widely regarded as the most attractive feature of the city. Made of bronze, it’s about 11 meters (36 feet) tall and weights about 120 tons（abt 265,000lbs).

It was made in the mid-13th century and has never been damaged by fire, earthquake, or tsunami, so its original appearance remains pretty much intact.

The Great Buddha is located a 5-10 minute walk from Hase Station, the third station from Kamakura along the Enoden railway line.

The Enoden is a streetcar-like train that connects Kamakura with Enoshima and Fujisawa. Its terminal station in Kamakura is located just next of JR Kamakura Station.

Kamakura developed its own culture based on Samurai values, and it is clearly evident in Kenchoji Temple, a temple in northern Kamakura. Kenchuji was one of the first temples in the country to adopt the tentets of Zen Buddhism.

Zen places emphasis on practical methods for attaining enlightenment, such as zazen meditation and mondo dialogue, and the nature of the religion was congruous with samurai values.

The spirit of the Samurai can be seen in Kenchoji’s sculptures as well. This statue is one of the guardian deities of the temple.

The face and the clothes are carved in a realistic manner. Stylistically, it’s completely different from Buddhist statues made prior to this period which have a rounded shape and a gentle look.

The statues are reporting to the minister of Education, Culture, Sports, Science and Technology to enroll in the registered tangible cultural heritage of the country

The culture of the nobility in earlier times was one of magnificence and elegance, but Kamakura saw the emergence of Samurai culture which reflected the spartan ideals of the warrio class.

It can also be reached in about a 15 minute walk from Tsurugaoka Hachimangu Shrine.

Recommendable other temples and shrines

This is my personal recommendation to visit temples and shrines beside Kotokuin Temple (the Great Buddha) and Kenchoji Temple.

Hokokuji Temple (aka Bamboo Temple) is well worth visit. As its name implies, 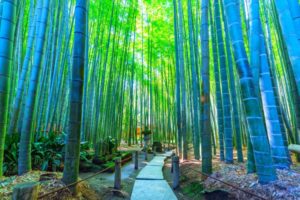 This small and unassuming temple of the Rinzai sect of Buddhism may seem average on first impressions, but it has a secret.

Beyond the simple gate and just behind the modest main hall lies a beautiful bamboo grove, with a forest of over 2000 surrounding the picturesque tea house nestled in the grounds of the temple.

And one more, Zeniarai Benten Shrine is a popular shrine in western Kamakura, which people visit to wash their money (zeniarai means “coin washing”).

It is said that money washed in the shrine’s spring, will double. 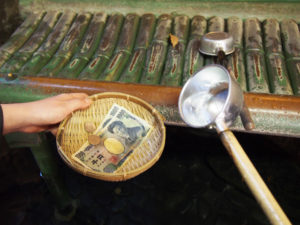 Zeniarai Benten Shrine is located about a 25-30 minute walk northwest of Kamakura Station. There is no bus station or other famous attraction nearby.

However, the shrine is located along the Daibutsu hiking trail which connects Kita-Kamakura with the Great Buddha. It is open : 8:00 to 16:30, No closing days, Admission Free

Others are : Meigetsuin Temple which is also known as Ajisaidera (“Hydrangea Temple”) because hydrangea bloom in abundance on the temple grounds during the rainy season around June. 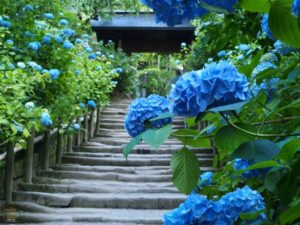 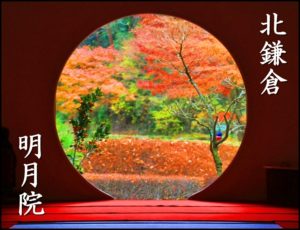 You can view the garden through the “windows of enlightenment,” shaped like circles, which symbolize enlightenment, truth, and the cosmos. The garden behind the temple is only open for viewing during the fall foliage season.

Hasedera Temple is a temple of the Jodo sect, famous for its eleven-headed statue of Kannon, the goddess of mercy.

The 9.18 meter tall, gilded wooden statue is regarded as one of the largest wooden sculpture in Japan and can be viewed in the temple’s main building, the Kannon-do Hall.

According to legend, it was carved from the same tree as the similarly tall Kannon statue worshiped at the Hasedera Temple in Nara Prefecture.

Engakuji Temple is one of the leading Zen temples in Eastern Japan and the number two of Kamakura’s five great Zen temples.

Engakuji was founded by the ruling regent Hojo Tokimune in the year 1282, one year after the second invasion attempt by the Mongols had been reverted. One purpose of the new temple was to pay respect to the fallen Japanese and Mongolian soldiers.

Ankokuronji Temple is one of several temples of the Nichiren sect of Japanese Buddhism along the hills in the southeast of Kamakura.

Nichiren himself founded Ankokuronji around 1253 when he first came to Kamakura, and he is said to have lived at the temple for several years.

Visitors can walk along a short hiking trail through the wooded hills around the temple buildings. A nice view of the city of Kamakura can be enjoyed underway.

Jomyoji Temple is a Zen temple in the hills of eastern Kamakura. Ranked fifth among the five great Zen temples of Kamakura, Jomyoji was founded by the influential Ashikaga family and at its peak was made up of seven buildings and several pagodas.

Over the centuries, however, many of the structures were destroyed by fire, and only its historic main hall, reception hall, main gate and warehouse remain today.

The main hall sits at the end of a garden and houses a statue of Shaka Nyorai, the historical Buddha.

Jomyoji Temple also has a restored teahouse where visitors can sit and enjoy a cup of tea for a small fee while enjoying the view of a nice dry garden.

On the hillside behind the main hall is the temple’s spacious cemetery, while a path leads up the hill to a small western-style restaurant.

The restaurant is operated by the temple and offers good views out over Kamakura from its patio. 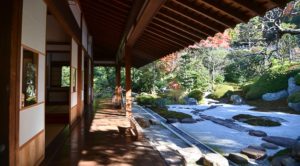 Zuisenji Temple is a beautiful Zen temple in the far east of Kamakura, in the back of a narrow valley and surrounded by wooded hills.

Myohonji Temple is one of several temples of the Nichiren sect of Japanese Buddhism along the southeastern hills of Kamakura.

The temple was founded by Hiki Yoshimoto in 1260, and features a statue of Nichiren to the left of the main hall.

The temple is connected via the Gionyama hiking trail with some other nearby temples and a shrine.

It leads through the wooded hills of Kamakura, and should be explored only with good walking shoes and during dry weather, because there are a few steep and rough passages.

Tokeiji Temple is a small branch temple of the Engakuji school within the Rinzai sect of Zen Buddhism.

Its head temple, the Engakuji Temple, stands just a few hundred meters away on the opposite side of the railway tracks.

Jochiji Temple is the number four of Kamakura’s five great Zen temples. It is a branch temple of the Engakuji school of the Rinzai sect of Zen Buddhism.

Its head temple, the Engakuji Temple, stands just a few hundred meters away on the opposite side of the railway tracks.

Jufukuji Temple is the number three of Kamakura’s five great Zen temples. It is a branch temple of the Rinzai sect’s Kenchoji school.

2020 The Olympic venue, Enoshima sailing is close by 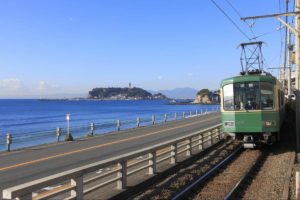 The Enoden Line – Rail service between Kamakura station and Enoshima station, taking about 2o minutes by train and 15 minutes on foot from Enoshima station to the Olympic venue of Enoshima small island seen in the back. 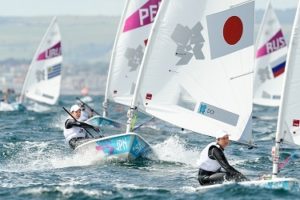 Last but not least, Kamakura is unlike Kyoto in many ways, and visitors to the city will be exposed to a different side of Japanese culture. We hope you would enjoy visiting such a full-attractive town, Kamakura!