Hi everyone, have you ever heard of “Nattō” which represents one of Japanese fermented foods such as “Miso(bean paste)”, “Shoyu(soy sauce)” and it is good friend of “red wine”?

Most people probably feel something odd to see the image below shown saying “Nattō and red wine are best friend”.

Sorry to mention my personal preference here that it truely goes well with red wine in not only taste but also both of them are rich in several nutrients. 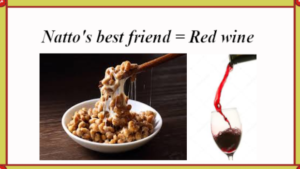 In Japan, Nattō is typically topped with soy sauce, mustard, chives(onions) or other seasonings and served with cooked rice. This is a common way of enjoying one at the time of meals.

Now that I mentioned my personal preference of best mutual partner of “Nattō and Red wine”, the nutrition of red wine, as you already know that it contains the so-called “Resveratrol”, which is a substance found in the skins of grapes and it is being studied in the prevention of cancer and heart disease. it is a type of antioxidant and a type of polyphenol.

Meanwhile the nutrition is to  1) strengthen your Immune System,  2) promot Heart Health by intaking vitamin,  3) contribute to stronger Bones,  4)improve your Digestion, and the like.

In addition, calory-wise, it provides the same amount of protein as a similar amount of beef, but with much fewer calories.

Why so many people dislike Nattō while it is really becoming super popular around the world?

Nattō has not been accepted to those who are not used to eating it as they say it’s definitely an acquired taste food and what’s worse is some say that it’s a little like “Limburger cheese” on the point of aroma, I don’t think personally so, though.

Anyway, let’s start talking about Nattō so as to be understood and discovered by you from the other aspects.

Nattō is a traditional Japanese food made from soybeans fermented with bacteria Bacillus subtilis. Some eat it as a breakfast food. 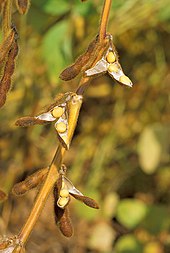 Soybeans in a plantation

It is served with soy sauce, karashi mustard and Japanese bunching onion. Natto may be an acquired taste because of its powerful smell, strong flavor, and slimy texture.

It typically is eaten on rice as seen below. 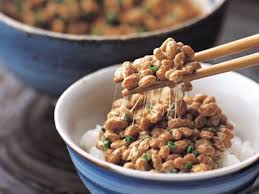 It is occasionally used in other foods, such as nattō sushi as shown below , nattō toast, in miso soup, tamagoyaki (fried egg), salad, as an ingredient in okonomiyaki (savory pancake with various ingredients), or even with spaghetti as shown below too  . Sometimes soybeans are crushed and fermented. This is called ‘hikiwari nattō‘. 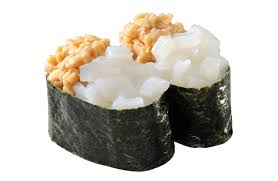 Many find the taste unpleasant and smelly, while others relish it as a delicacy. Nattō is more popular in some areas of Japan than in others.

It is also known to be popular in the eastern Kanto region, but less popular in Kansai. A 2009 internet survey in Japan indicated 70.2% of respondents like natto and 29.8% do not, but out of 29.8% who dislike it, about half of them eat it for its health benefits.

Finally, this article explains what makes nattō so nutritious and good in taste if you could acquire it, so why don’t you giving it a try?

I hope you are gradually becoming a Nattō fan and enjoy tasting for your healthy life. Thanks.

And last but not least, “Tofō” which is made from the same gredient beans and full of nutrition, to be well worth browsing, thanks