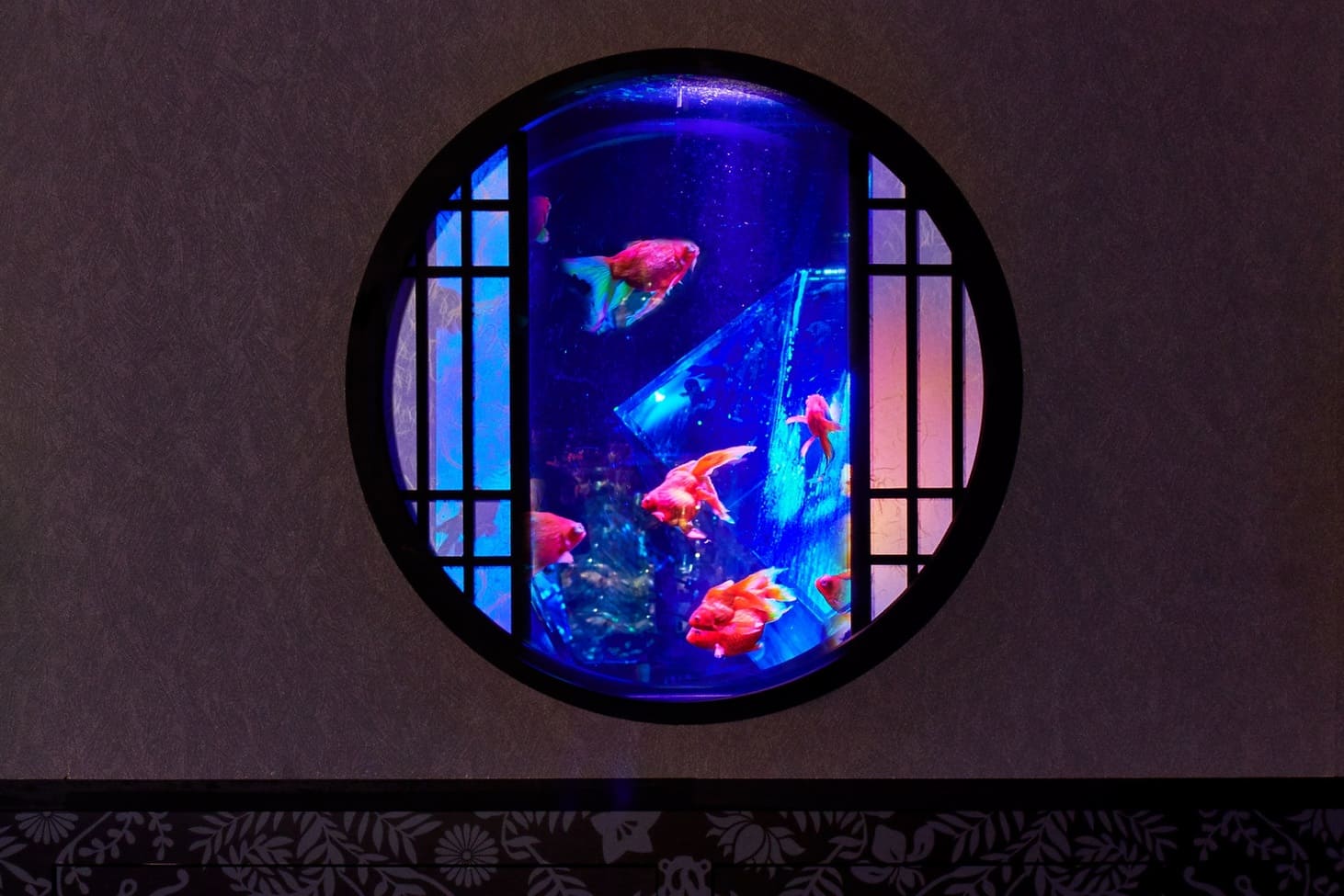 Since ancient times, round windows have been used in tea rooms in Japanese architecture.
Peeking through the round window, the beautiful scene spreads.
Perhaps the atmosphere of the round windows further stimulated peoples’s imagination of the distant scenery.
The extraordinary world opens from the mysterious window where goldfish swim when you open the shoji screnn.

Hi how are you?  Fortunately this summer’s dreadful scorching heat seemed to be over and it’s the best season arriving to enjoy the beauty.

I went to the Art Aquarium Museum and I’d like to report that live perfoming arts, ephemeral dancing elegantly of goldfish totally overwhelmed me.

Since the stunning goldfish exhibition stepped foot in Tokyo back in 2007, it has become an annual summer tradition of Nihonbashi, a vibrant city district in Tokyo, attracting over 10 million visitors over the years.

The exhibition has even travelled across the globe, inspiring the people in other cities like Milan and Shanghai. 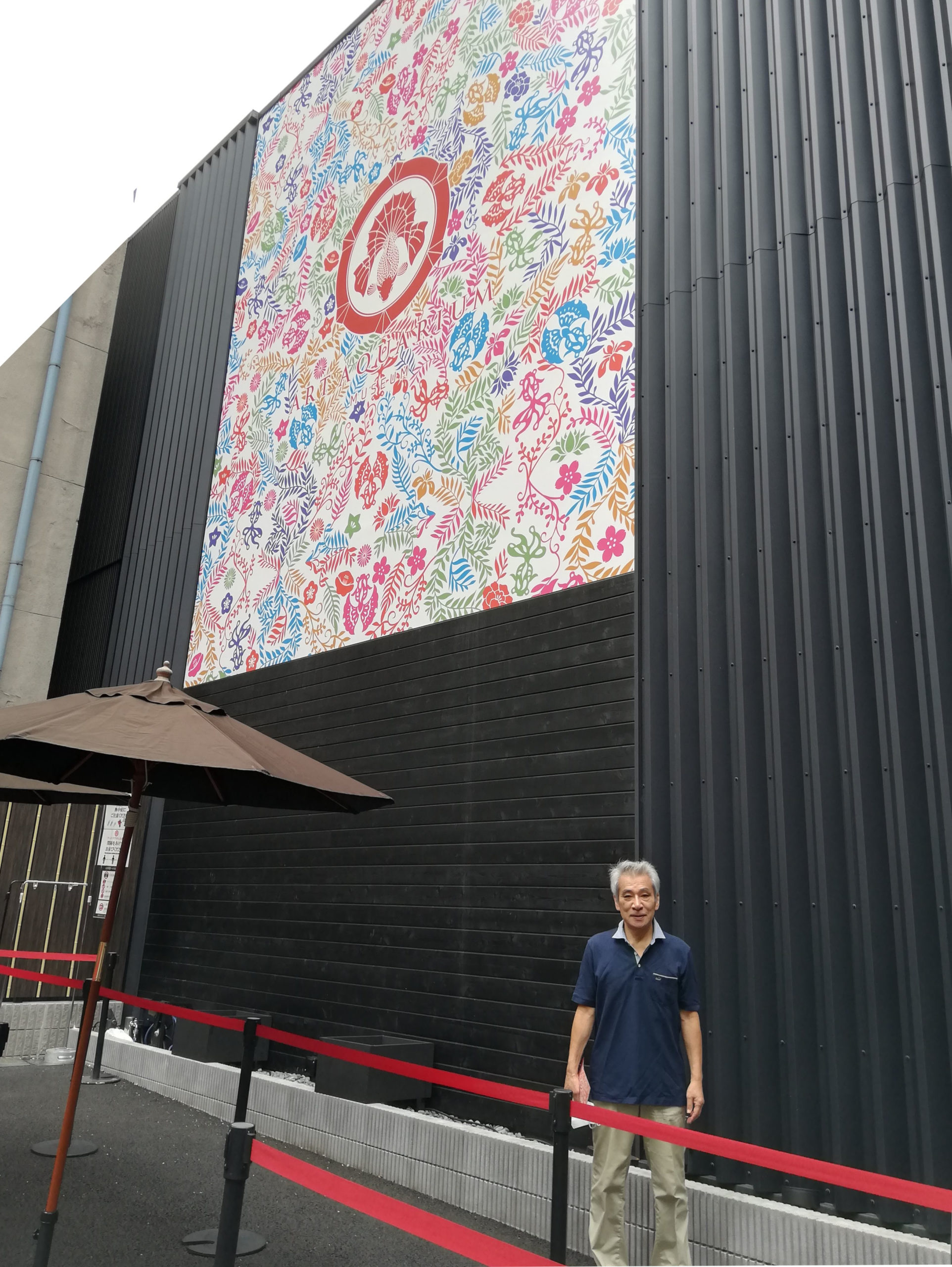 The poster standing at the entrance of the venue

Hidetomo Kimura started off in the retail business of aquarium fish and became an artist who created the first-ever Art Aquarium on earth.

Kingyo are a staple in Japanese culture and were commonly collected by wealthy merchants in the past.

What To Expect At The Dreamy Art Aquarium!

After years of annual exhibitions, the company has decided to open its first permanent Art Aquarium museum in Nihonbashi in August this year!

The specially-designed 2,321sqm space will be about 3 times the size of previous exhibitions and will come to life with approximately 30,000 goldfish of various varieties.

The stunning display is a treat for the eyes and soul, offering a therapeutic experience that’s hard to find elsewhere. 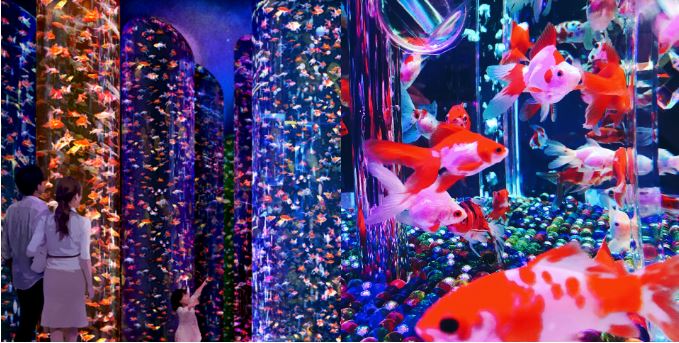 We’re especially excited for the “Goldfish Forest” space where there will be pillars filled with water and goldfish gliding in them, lined up to look like a forest!

The Art Aquarium will house aquariums that inject elements of the Japanese culture, including spherical fountains, a huge tank filled with colourful koi(carp) fish.

The forest of goldfish (Kingyo no Mori)

Beyond life sized column of waters, is the forest like pillars with goldfishes swimming.
Once stepping into theis world, it is a stroll through the profound mystery of the world of Goldfish.
The boundary between the world of reality and the world of fantasy becomes parallel, making itfeel like floating in the deep ocean. 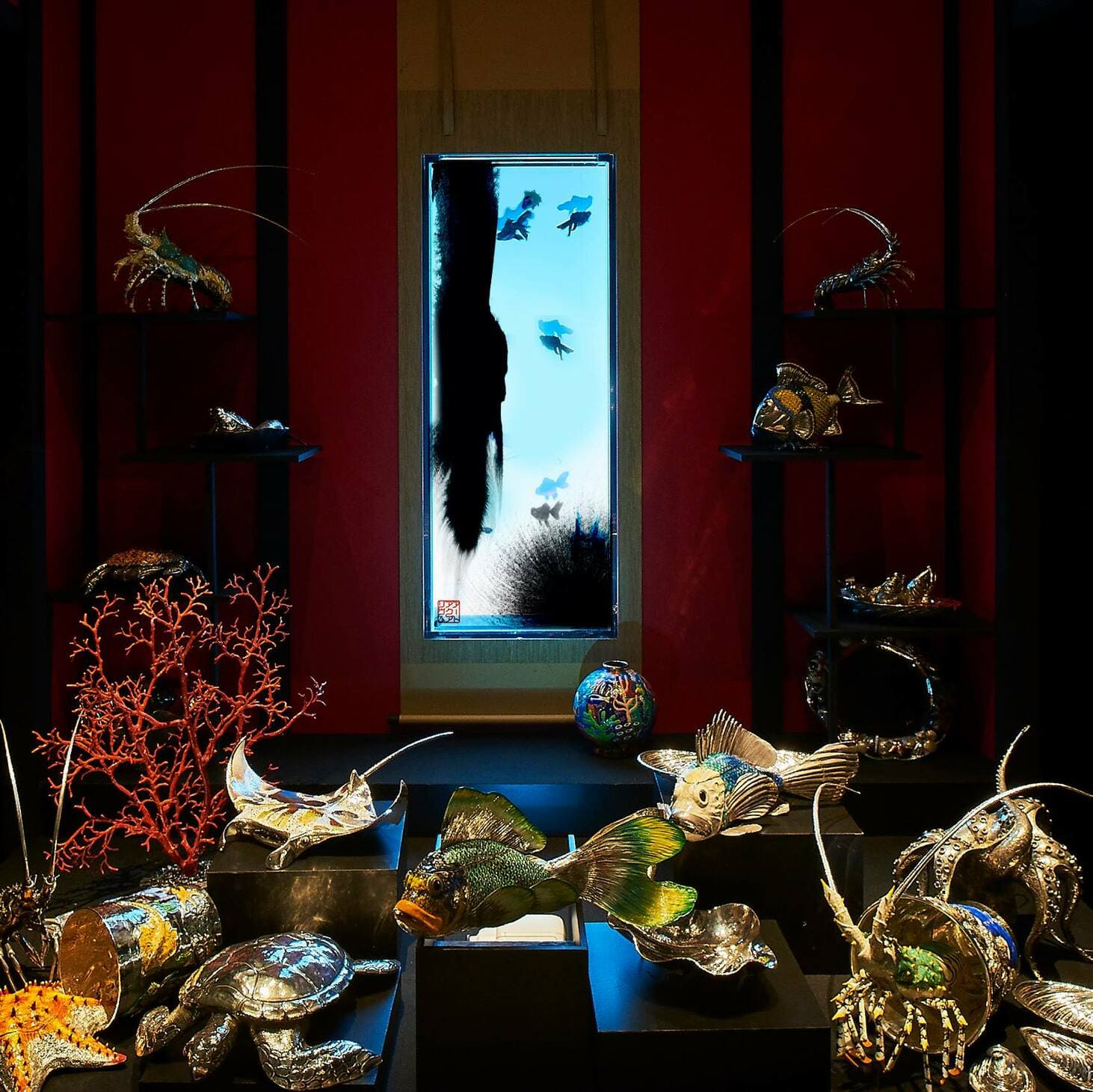 Wall-mounted goldfish is an ink art based on black and white, combining vivid goldfish and images, and it is a work with the “beauty of wabi-sabi” in Japan. 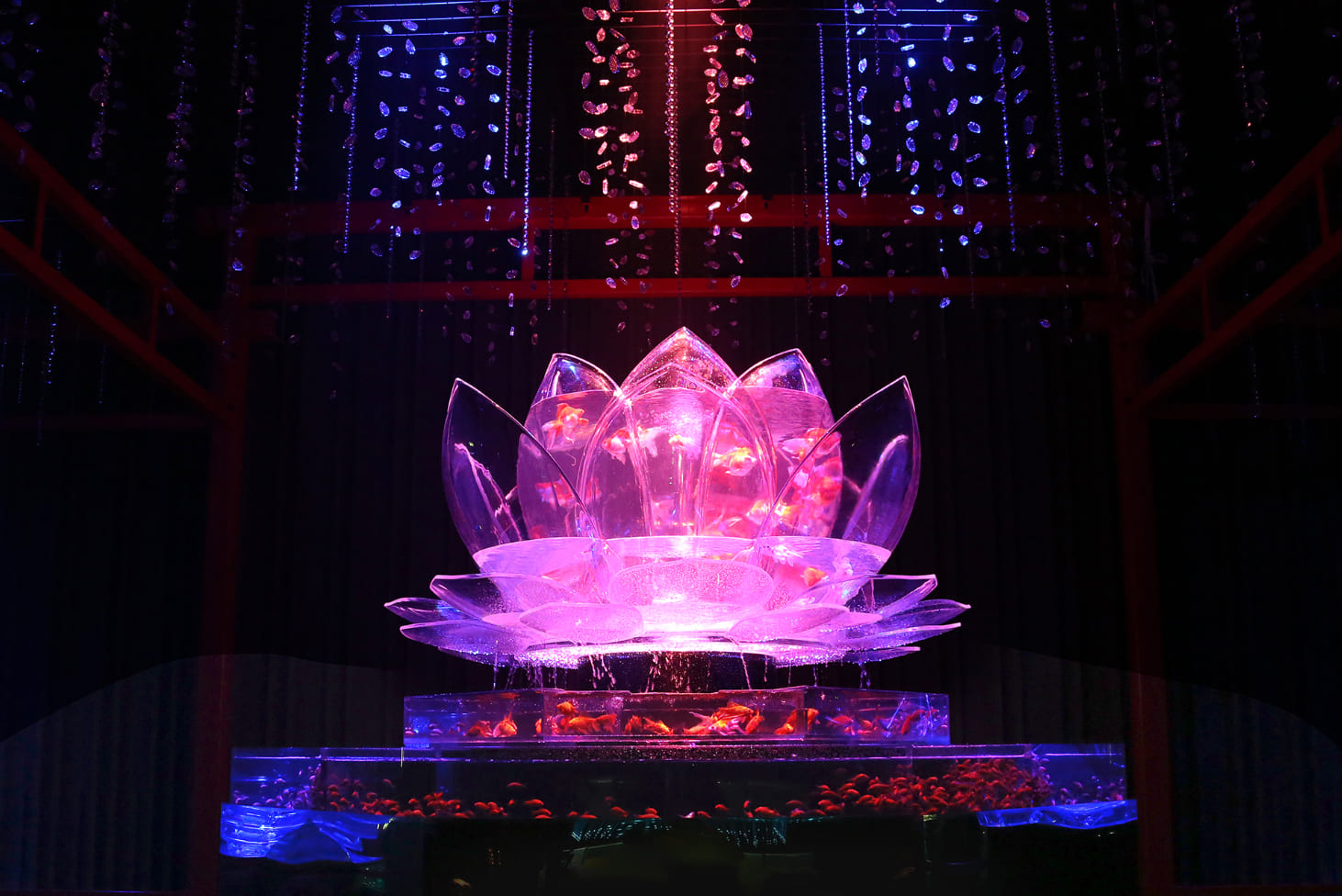 This aquarium is about 4 m square with a magnificent atmosphere and a design motif based on the lotus, a flower whose name is a seasonal haiku word for summer.

Despite the hardship and difficulty they must overcome to bloom, their fleeting flowers fall off on the forth day.

This art piece imbibes a worldview of grace and splendor that interweaves the lotus, a symbol of beautiful and painfully ephemeral things, with the koi, and elegant fish that swims beautifully.

What’s Oiran that is one of main attraction?

“Oiran” (花魁) was the term for a specific category of high-ranking courtesans in Japanese history.

What’s the differnce between Oiran and Geisha?

The differences between them are very obvious in their professions and appearance.

As you know, the Geisha are professional entertainers and hostesses since the 16th century; but Oiran only existed in the the red-light district of Edo(now Tokyo) in the 1750s called Yoshiwara as prostitutes or Yujo (lit., “woman of pleasure”). 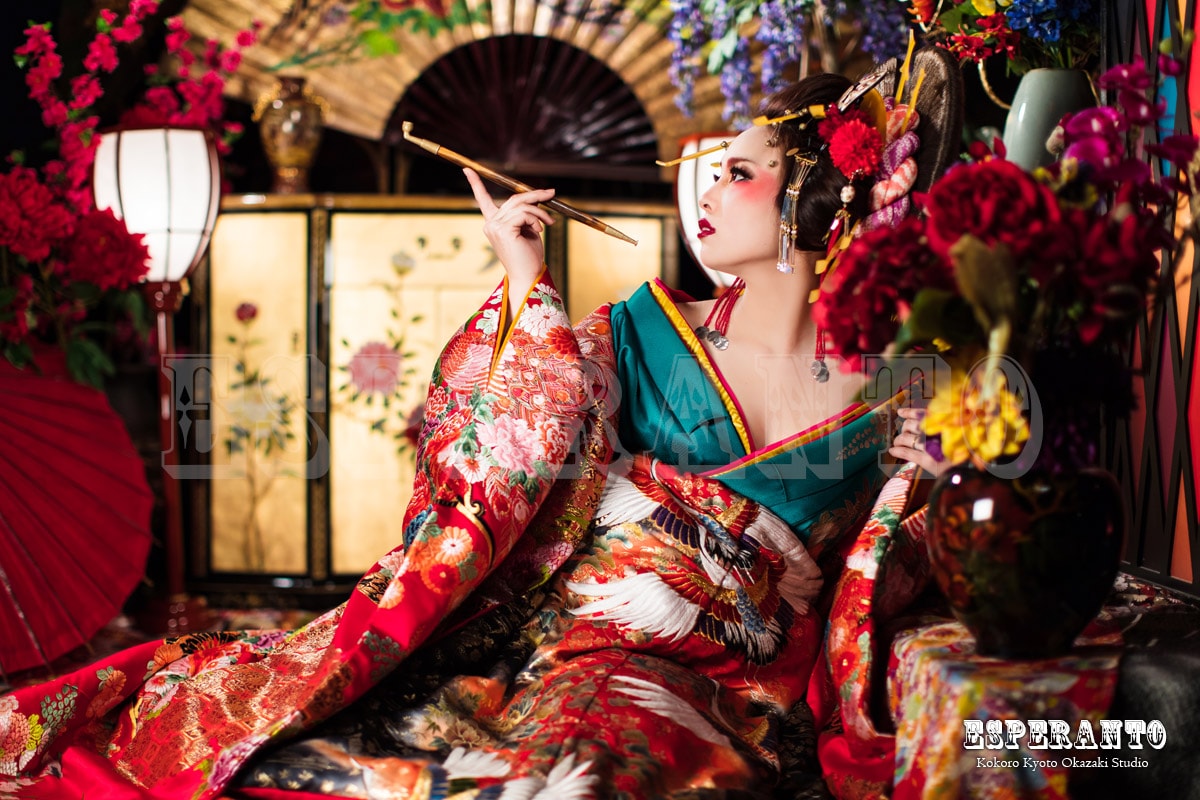 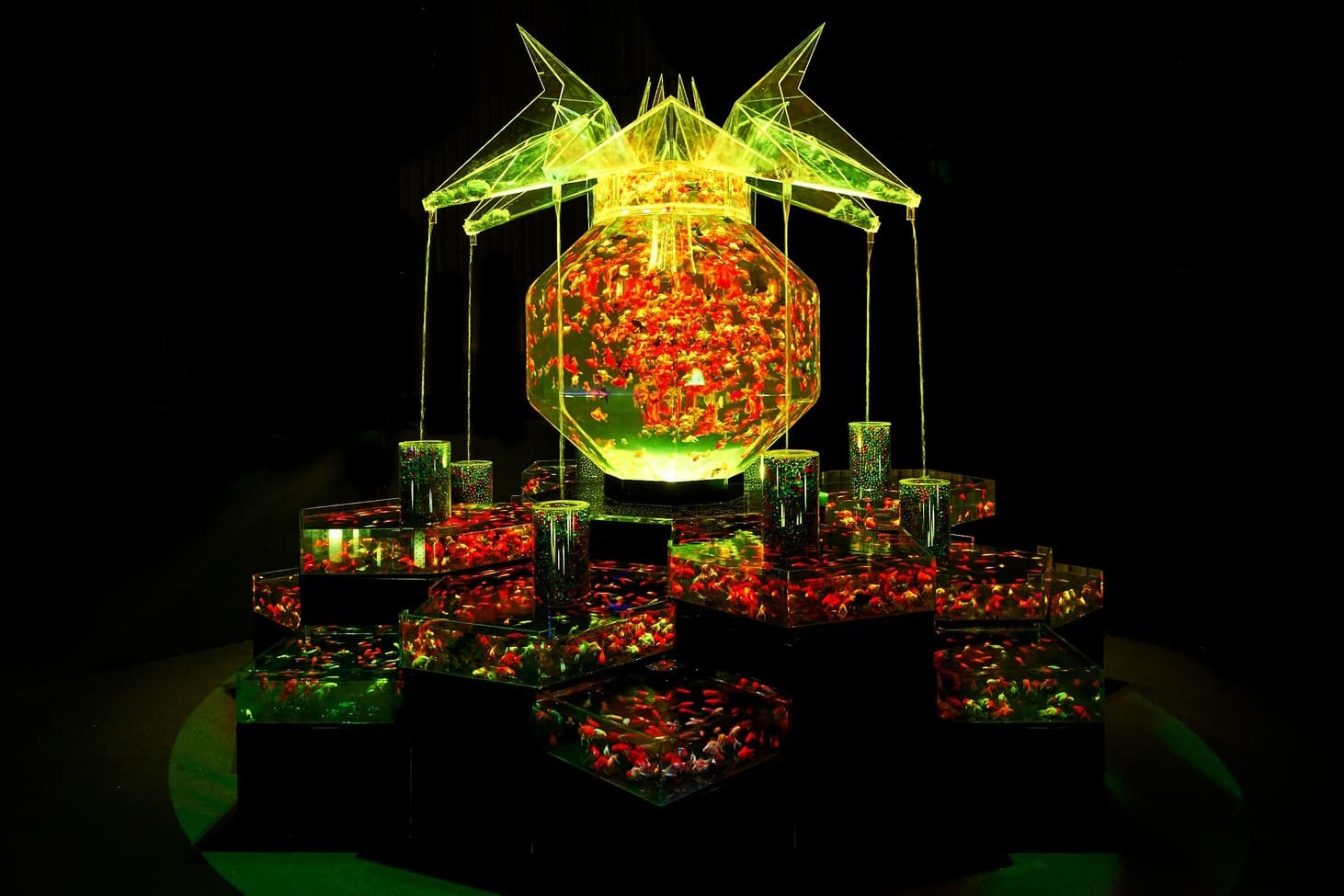 This piece consists of an enormous fishbowl and the 17 aquanriums that surround it, which are colored by resplendent lights in seven hues as well as video.

In this aquarium from which cool water flows, 3,000 goldfish dance and swim in teh likeness of the women of the Edo period’s Geisha district, creating a glamourous and ephemeral dream-like world.

The size of this fishbowl is 2.5m in diameter and height, and the entire work has a maximum diameter of 5.6m and height of 3.5 m. It contains about three times the water volume of “Oiran”, making it the largest work of art ever exibitedat Art Aquarium. 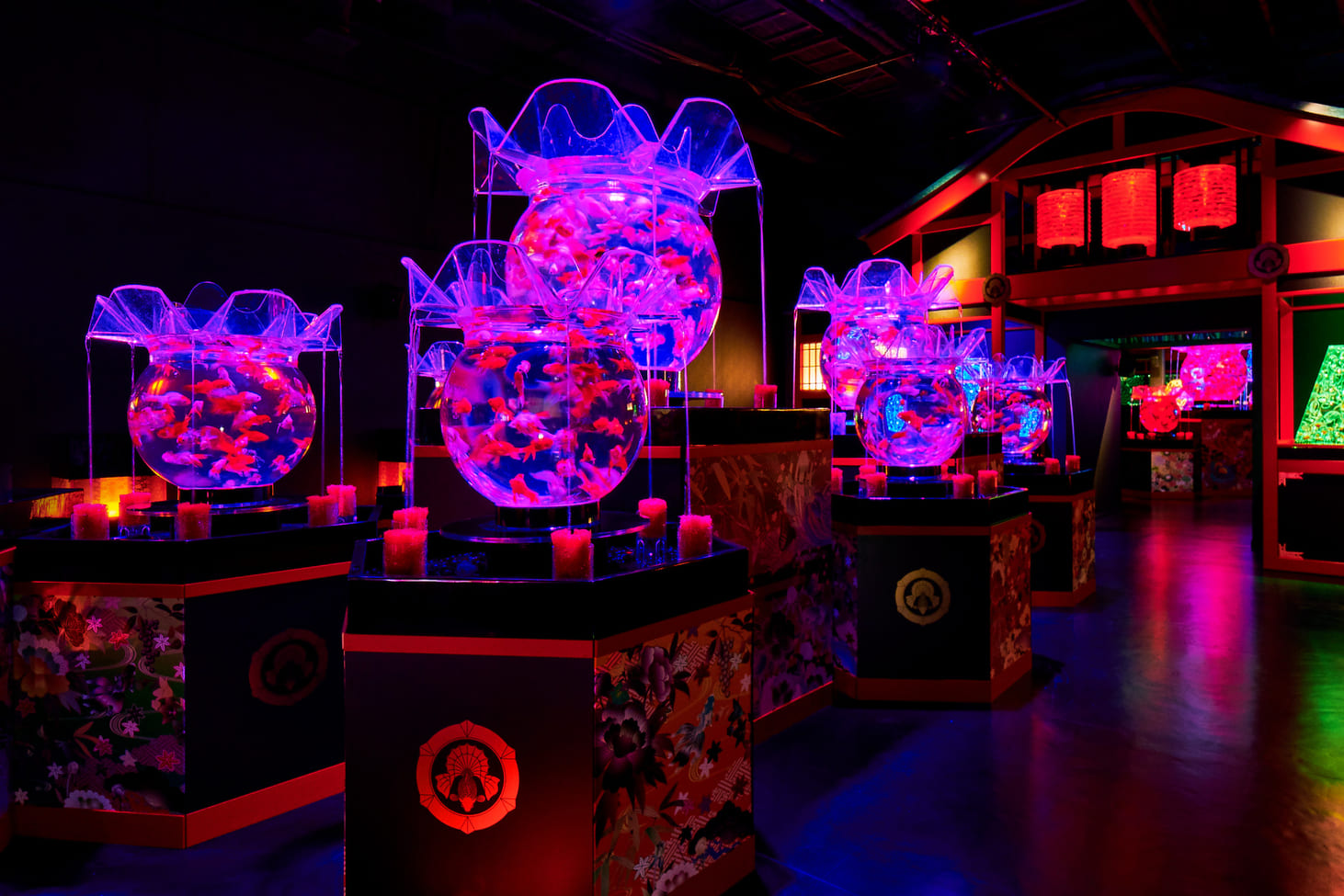 In the Edo period, “Hanamachi” was considered the most gorgeous and innovative place.

The most dazzling moment is the district “Procession of courtesan (Oiran Dōchū), represented in the different scales os the masterpiece “Oiran”.

The gate that was at the entrance of “Hanamachi”, is represented in the artwork “Goldfish gate (Kingyo daimon)”. Once passing through the Goldfish gate, the luxurious and gorgeous world is further opened. 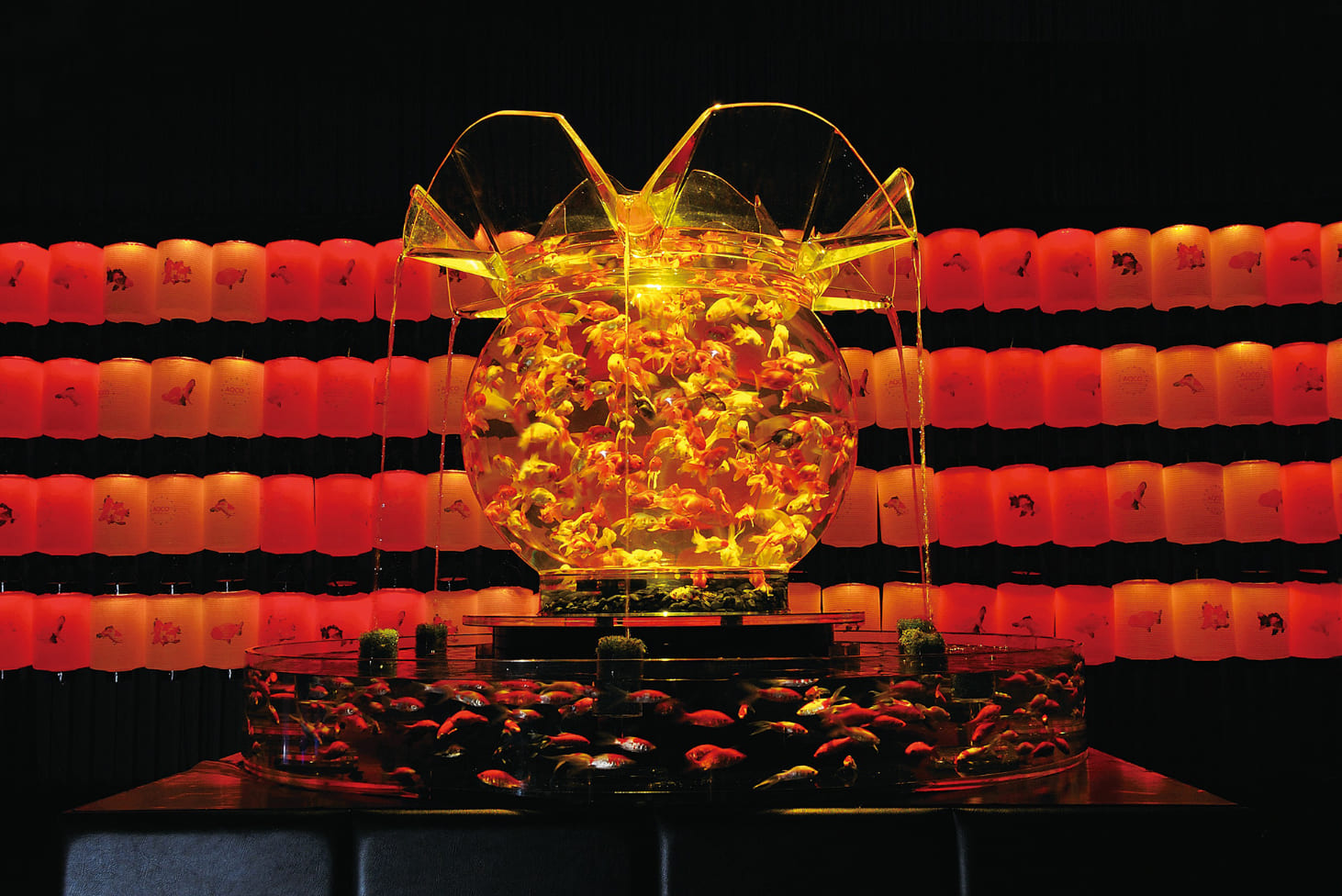 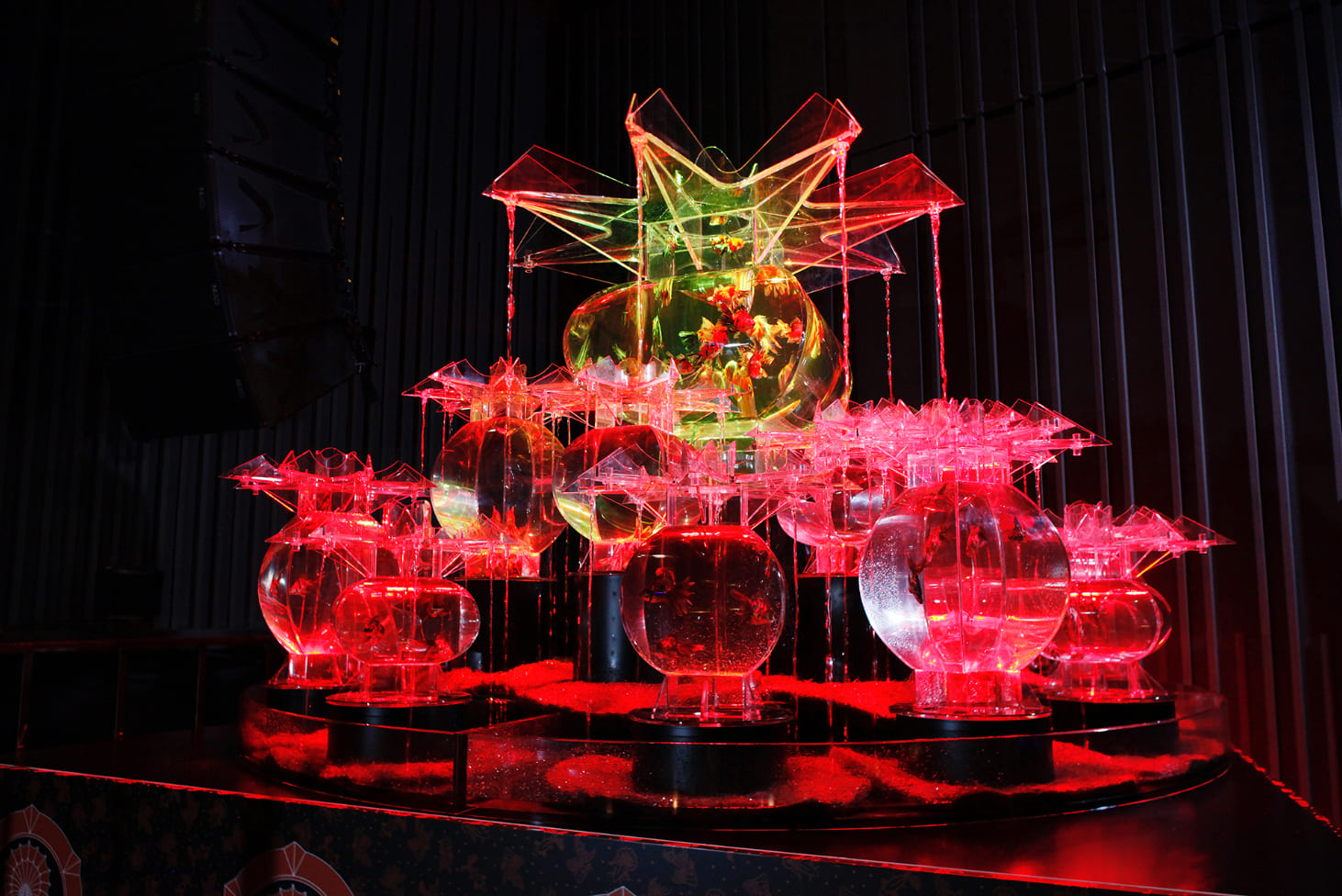 This large art piece is one of a series of enormous fishbowls that is based on the concept seen in “Oiran”.

This composite piece is about 3 m in width, and it represents the inner palace (called the Ooku) of Edo Castle, which symbolizes the Edo period when the culture of loving goldfish blossomed.

It expresses a world of luxury and opulence in which many women would compete with each other on beauty.

Despite the simmering beauty and sparkling light, a way of life that is somehow ephemeral is superimposed on to bewitchingly swimming goldfish.

And the last one;

This art piece consisits of an enormous aquarium 1.5 m in diameter designed to resemble the earth, inside which nishikigoi (colorful pond koi(carp)swim.

It is a work of art that exudes the overwhelming presence of the earth seen from space, colored with nishikigoi that symbolize beauty.

By an unexpected mechanism, the art piece itself rotates as water flows along its sureface, depicting the earth as a water planet.