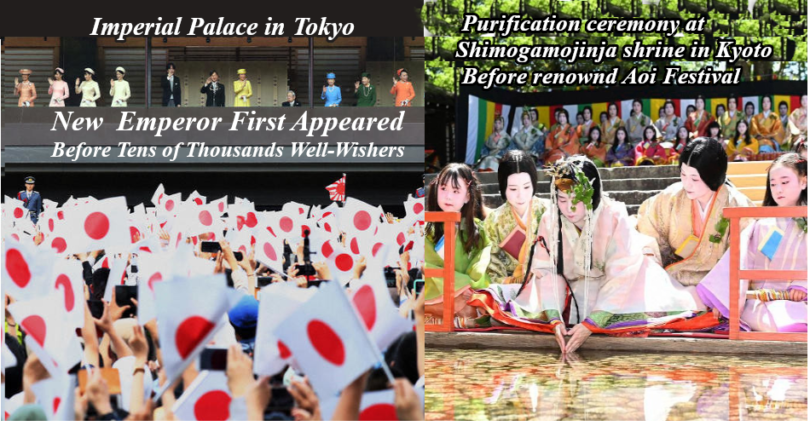 Hello  everyone how are you?  Oh, no,no; you might be dog tired among densely crowed places during ” Golden Week holiday “, of which people enjoy a 10-day consective holiday 2019.

The Golden Week is a collection of four national holidays within seven days. In combination with well placed weekends, the Golden Week becomes one of Japan’s three busiest holiday seasons, besides New Year and the Obon week.

Trains, airports and sightseeing spots get very crowded during Golden Week, and accommodation in tourist areas can get booked out well in advance.

The national holidays making up the Golden Week are:

May 3 Constitution Day (Kenpo kinenbi):
On this day in 1947, the new postwar constitution was put into effect.

May 4 Greenery Day (Midori no hi):

The Boy’s Festival (Tango no Sekku) is celebrated on this day. Families pray for the health and future success of their sons by hanging up carp streamers and displaying samurai dolls, both symbolizing strength, power and success in life. The Girl’s Festival is celebrated on March 3.

In 2019, the Emperor is scheduled to abdicate on April 30, followed by the ascension to the throne of the new Emperor on May 1 which will be made a national holiday.

As a result, April 30 and May 2 will also become national holidays (because according to law, a day between two holidays also becomes a holiday), creating an unprecedented, consecutive 10-day holiday from April 27 to May 6. Travel activity is expected to peak around the beginning and end of the holiday period.

You would agree what I say that from photo taken on that day as follows, 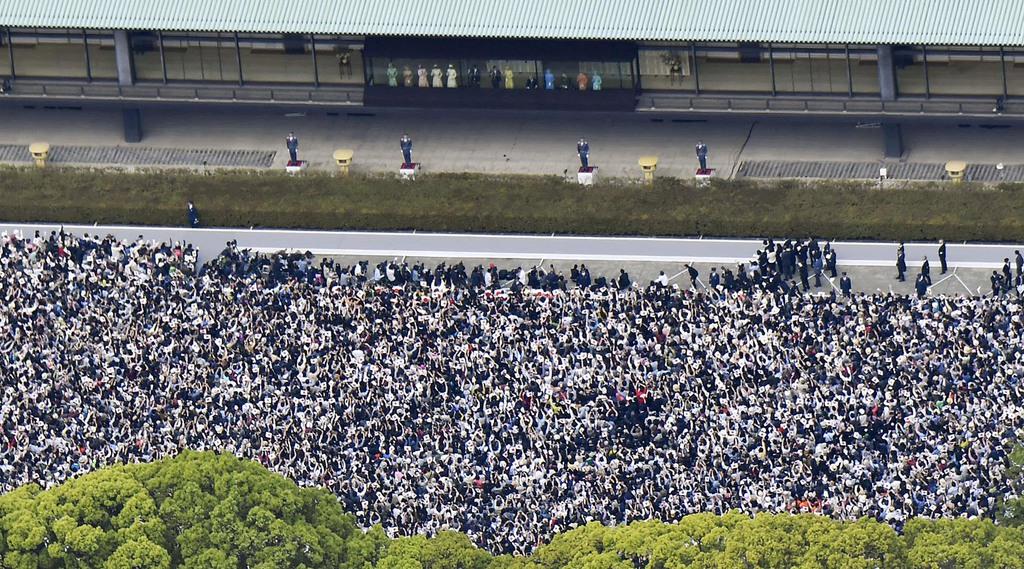 A lot of people welcome New Emperor as he makes first public appearance on May 4th, 2019 since accession held on May 1st.

The Imperial Place grounds are filled with well-wishers congratulating Emperor Naruhito on his enthronement on May 4, 2019

Emperor Naruhito expressed his hopes for progress toward world peace at the Imperial Palace, where 140,000 people gathered to witness his first public greeting since ascending to the throne on May 1.

“I am deeply blessed and grateful for everyone here today who has offered congratulations,” the emperor said in a prepared statement.

“Not only do I pray for everyone’s health and happiness, I hope that our nation can join hands with countries around the world and together make progress toward achieving world peace.” 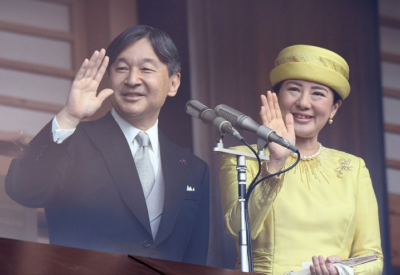 More than 140,000 people gathered for greeting sessions scheduled from 10 a.m. to 3 p.m., according to the Imperial Household Agency, in which members of the imperial family made roughly five-minute appearances once every hour.

The figure exceeded around 109,800 for the former emperor’s first public appearance in November 1990 following his ascension to the throne, according to the Imperial Household Agency.

The celebration in 1990 took place nearly two years after the death of Emperor Hirohito, posthumously known as Emperor Showa, as the country remained in mourning.

The emperor — who was born in 1960 — has never experienced war. He was educated at Oxford University and traveled during his time in Europe.

Empress Masako, a former diplomat and Harvard University graduate who is fluent in French and English, spent significant parts of her formative years in Moscow, New York and Boston.

“We’ve never had a bilingual imperial couple with no memory of or connection to World War II,” said Setsuko Okada, an 84-year-old Tokyo resident who came to the greeting. “Or any war for that matter, at least, not directly.”

“Because of that he’ll want to build peaceful relationships with other nations.”

Okada’s father and brother were extremely fond of the imperial household, she explained.

While she has walked past the palace numerous times over the years, the emperor’s public greeting on Saturday was the first time she had ever stepped foot inside the Imperial Palace grounds, much less caught a glimpse of the imperial couple. She brought her 43-year-old daughter, Nozomi, along with her.

The mother and daughter agreed that Emperor Naruhito seems like a good person — much like his father — and with Empress Masako at his side, they believe the imperial household will continue to modernize.

Setsuko said it’s important for the monarchy to have a strong connection to the rest of the world.

“For better or worse, this country changed every time a new emperor took the throne,” she said. “The world gets bigger every day. Emperor Naruhito and Empress Masako will help us build bridges with other countries.”

It was the Shibuya family’s first time inside the grounds of the Imperial Palace as well. The young mother and father, along with their 1-year-old child, thought the beginning of a new era — and the accession of the new emperor — was a good opportunity to make their first visit.

The father, who preferred not to give his first name, said he was nervous leading up to the emperor’s first public appearance since ascending to the throne.

“He thought we were going to get much closer,” the mother said, laughing. “We’ve been meaning to come to one of these for years but we never had the chance.”

“But I’m glad we did,” she said. “Emperor Naruhito’s demeanor reminds me of his father. I hope he carries on his legacy by praying for disaster victims, doing his best to give them energy and hope, and meeting us ordinary people at the same level, just as his father did.”

What’s the purification ceremony at a shrine in Kyoto?

A young woman who will play the heroine of Kyoto’s centuries-old Aoi Festival performed a purification ceremony at a shrine here on May 4, ahead of the festival later this month.

Dressed as an ancient noble lady, Rika Ono, a 23-year-old company employee, who was chosen for the role of Saio-dai, dipped the tips of her fingers in the Mitarashigawa river in the compound of Shimogamojinja shrine in Sakyo Ward.

“ ‘Juni-hitoe’ was heavier than I had anticipated,” said Ono, the 64th Saio-dai, referring to the layered kimono of a Japanese court lady. “But the water was refreshing. I will focus my mind on the festival now and pass down the festival culture.”

The Aoi Festival, which is scheduled for May 15, is believed to have started about 1,400 years ago to pray for a bountiful harvest. It is one of the three most famous festivals in Kyoto. 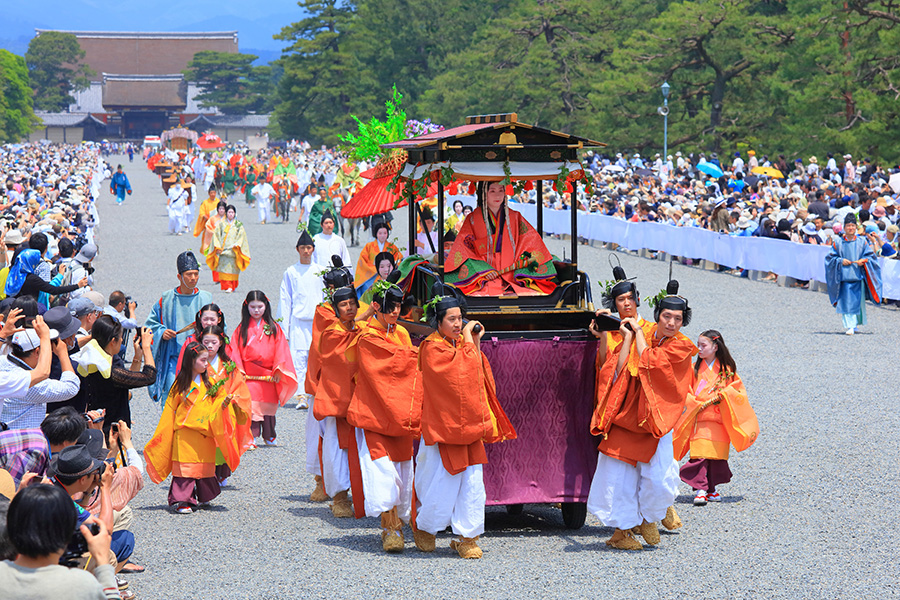 Ono and about 500 others in ancient court attire will parade on an 8-kilometer route from the former imperial palace in Kamigyo Ward to Shimogamojinja and then to Kamigamojinja in Kita Ward.