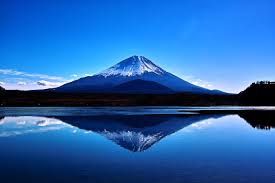 On July 1st,  the trekking route from Yoshida trail of Yamanashi Prefecture to the summit of Mount Fuji (Mt.Fuji) officially opened,  kicking off this year’s climbing season as planned.

The opening day for Mt. Fuji’s climbing on July 1st

Hi  everyone  how are you?  We have patiently waited the day of opening of climbing season on Mount Fuji, nevertheless, we had rain, trail cut off from peak because of the bad effect of typhoon last year 2018.

It was miraculously fortunate, however, the first climbers of Mount Fuji this season caught a glimpse of the sunrise despite the bad weather and a ban on reaching the peak of Japan’s tallest mountain on July 1.

A typhoon in autumn last year dislodged rocks near the summit, blocking the trail, so climbers were only allowed to reach station 8.5 at a height of 3,450 meters on the 3,776-meter mountain.

Amid the strong wind and rain, the five climbers shouted for joy when the rising sun appeared momentarily between the clouds after 4:20 a.m. 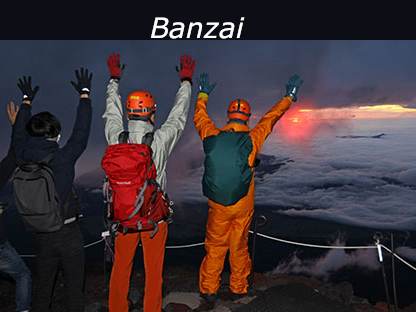 Mamoru Yamamoto, 76, and his son, Masaki, 46, both from Fujinomiya, Shizuoka Prefecture, said they felt lucky to see the unexpected orange morning light spreading in the distance.

They had waited patiently at station 8.5 for the sunlight. Ten minutes after the sunrise made its appearance, the rain started again.

The first day of climbing season usually draws streams of visitors clambering up the Yoshida trail to the summit.

Yamanashi Prefecture is rushing to clear the trail at the top and complete construction work to prevent other rocks from falling to allow climbers to again reach the peak.

The three routes on the Shizuoka Prefecture side of Mount Fuji will be open to climbers from July 10. The summer climbing season will run through Sept. 10.

And the number of Mount.Fuji’s climbers has been steadly increasing every year.

What does Mt.Fuji attract climbers that much?

I believe that almost all people around the world would know and/or might be heard the name of Mt.Fuji, which is refered to Japanese as a symbol of Japan.

At the same time, Mt.Fuji is considered as a sacred place and source of artistic inspiration.

That’s because the beauty of the solitary, often snow-capped, stratovolcano, known around the world as Mount Fuji, rising above villages and tree-fringed sea and lakes has long been the object of pilgrimages and inspired artists and poets.

The inscribed property consists of 25 sites which reflect the essence of Fujisan’s sacred and artistic landscape.

In the 12th century, Fujisan became the centre of training for ascetic Buddhism, which included Shinto elements.

On the upper 1,500-metre tier of the 3,776m mountain, pilgrim routes and crater shrines have been inscribed alongside sites around the base of the mountain including Sengen-jinja shrines, Oshi lodging houses, and natural volcanic features such as lava tree moulds, lakes, springs and waterfalls, which are revered as sacred.

Its representation in Japanese art goes back to the 11th century, but 19th century woodblock prints of views, including those from sand beaches with pine tree groves have made Fujisan an internationally recognized icon of Japan and have had a deep impact on the development of Western art. 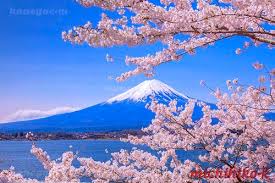 At 3,776 meters (12,388ft), Mt. Fuji is Japan’s highest mountain, and the Japanese have felt a deep affinity with it since ancient times.  Its shape is the result of repeated volcanic eruptins, which began around 100,000 years ago.

She has various kinds of face to enjoy viewers?

The appearance of the mountain varies constantly accoding to the changing seasons and even the passage of time during the course of a day.

The reason for this are related to Mt. Fuji’s location and its conical shape, sweeping upward unbroken from the coastal plain.

Moisture-ladden winds blowing off the ocean hit the side of the mountain and are forced upwards, creating many different shapes of clouds.

For example, clouds like this that look like a giant bamboo hat are known as kasagumo, literally “bamboo hat clouds”.

And this phenomenon, which can be seen when the sun comes up from behind the summit of the mountain, is called “Diamond Fuji”. Against the sunlight, the silhouette of the mountain stands out very clearly.

The appearance of Mt.Fuji keeps changing, yet it remains awesome and beautiful at all times. Mt. Fuji has been an object of worship for centuries. Countless numbers of people have dreamed of climbing it at least once in their lifetime.

In the early 19th century, some people unable to make the pilgrimage to the mountain would sometimes create a miniature version of Mt. Fuji called Fujizuka-literally, “mound Fuji”-in an area close to where they lived. These mounds served as substitutes for the real thing.

Mt.Fuji has also been the subject of many paintings and poems. Katsushika Hokusai, who lived during the late Edo period, created a series of woodblock prints depicting scenes including the mountain in a wide range of compositions. It’s called 36 Views of Mt. Fuji. 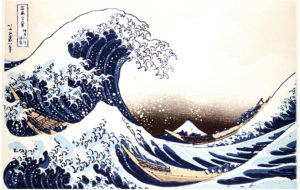 This is one of Hokusai’s masterpieces, “Red Fuji”. It’s thought that the artist managed to capture a very brief moment when Mt. Fuji, bathed in the early morning sun, glows red.

This is another well-known print in the series, Hokusai created a great sense of depth by contrasting the large barrel frame with the tiny peak of Mt. Fuji that can be seen through it.

From time immemorial, Mt. Fuji has been etched into Japanese hearts as an everlasting presence and the mountain of faith for Japanese too. The beautiful mountain is really like a mother to the Japanese.

Mt. Fuji is divided into 10 goume(10 stations) from the foot to the top of Mt.Fuji as follows, 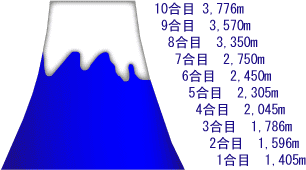 And here’s typical climbing gears including rainy gear in the backpack that are absolutely necessary as illustrated below, 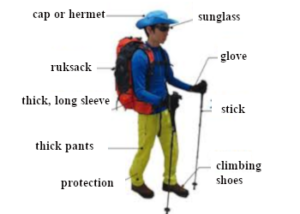 On the otherhand, climbing with upper body naked and with sandals is currently forbidden, shown the photo below which was taken around 50 years ago. You have to equip climbing gears as illustrated the above. 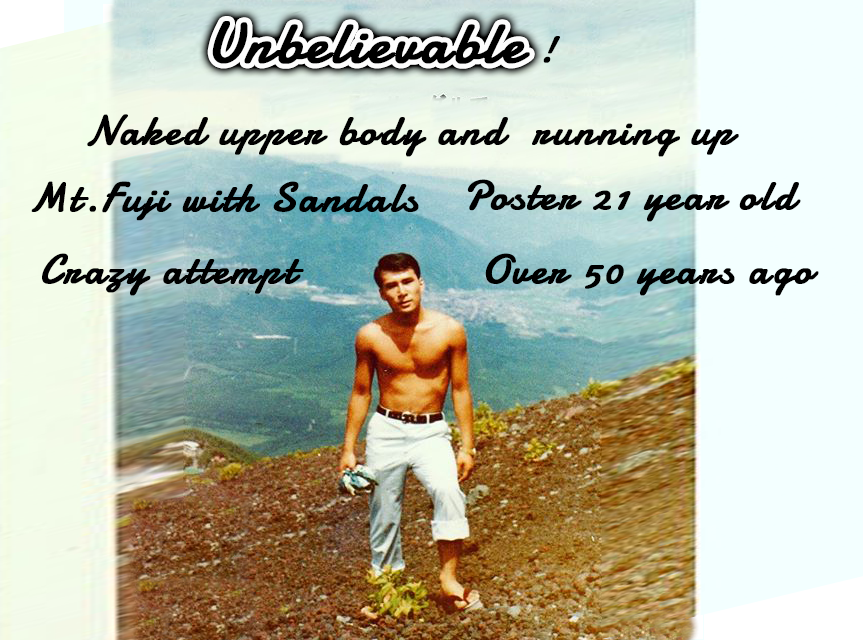 A lot of people climb it not only during daytime but also cool nighttime to pray to the rising sun from the summit of the mountain.

Climbers are chanting “Banzai” at the sight of the rising sun from the top of the Mt.Fuji at 4:30am.

Have a good time in climbing Mt. Fuji !