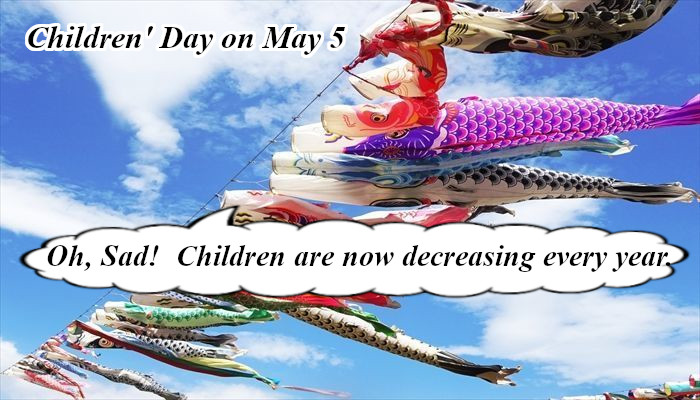 Hi everyone including good children, how are you doing? Today is “May 5”, means Children’s Day which is one of Japan’s Annual Events.

On May 5th, children’s day or boy’s festival, it reminds me of the scene decorated by “Carp flying in the blue sky” and warrior’s helmet, and we were very happy to see them. 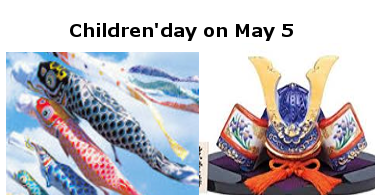 Why we celebrate on May 5 ?

That’s because our parents celebrate on the day wishing and praying for the healthy growth and for being strong.

Celebration of Boy’s Day is a happy thing, however, this is the other side of fact facing this country.

Japan’s child population has declined for the 38th year in a row and is now at a record low, the government said Saturday.

The data were released ahead of Children’s Day on May 5.

Japan’s birthrate has remained low amid a lack of support for working women, who continue to face the burden of homemaking and other traditional roles, as well as excessively long working hours and high education costs.

With children making up just 12.1% of its total population, Japan ranks lowest among countries with a population exceeding 40 million, followed by South Korea at 12.9% and Italy and Germany at 13.4%, according to the Statistics Bureau figures.

As of 2017, Japanese women on average gave birth to 1.43 children during their lifetimes. That compares with nearly 1.8 in the U.S. and Britain.

According to the latest government statistics, the number of births in 2018 fell to 921,000, the lowest since Japan began recording such statistics in 1899. Japan’s total population fell by 448,000 people, a record decline, to 126 million.

In the new era of Reiwa, an easy solution to the problem is not expected to be found soon to halt the declining numbers, analysts said.

The nation’s birthrate has also remained low amid a lack of support for working women, many of whom continue to face the burden of homemaking and other traditional roles while having to work long hours.

According to the data, released before Children’s Day on Sunday, those aged under 15 accounted for 12.1 percent of the nation’s total population, down 0.2 percentage point year on year and falling for the 45th straight year since 1975. 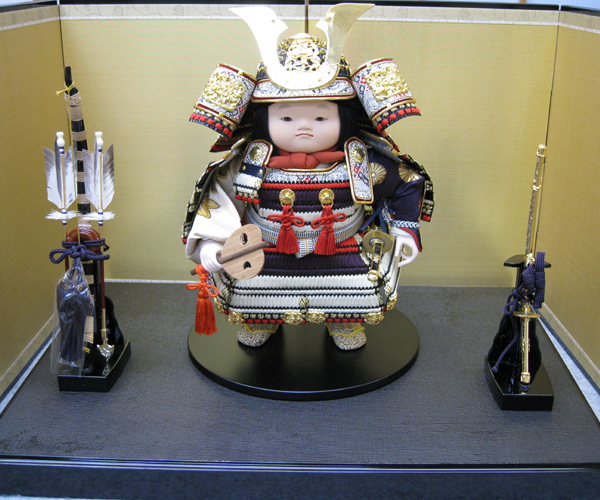 Japan ranks lowest among countries with a population exceeding 40 million, followed by South Korea at 12.9% and Italy and Germany at 13.4%, according to the Statistics Bureau figures.

Of all children, boys accounted for 7.85 million and girls totaled 7.48 million.

The number remained unchanged at 247,000 in Okinawa Prefecture and decreased in all 45 of the other prefectures.

Japan’s population is forecast to fall below 100 million by 2050, barring a huge influx of immigrants.

Prime Minister Shinzo Abe has said aging and the low birth rate are a national crisis. He’s promised labor and other reforms to help alleviate the burden on families that discourage couples from having more children.

Longer life spans in Japan have added to rising costs for elderly care and social security.

Conservative lawmakers in Abe’s government have at times blamed the elderly or childless for long-term demographic trends.