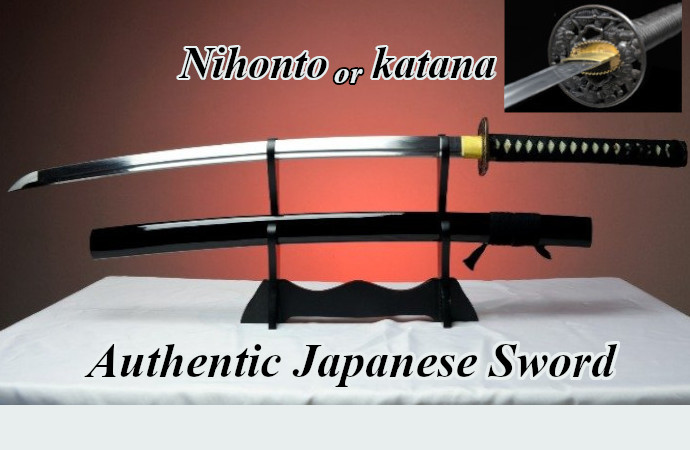 Hi everyone,  What’s going on?  Today’s topic is ” Nihonto or Katana ” (Japanese sword), which is not commonly seen in daily lives since it is strictly banned to own, show at home, in public in Japan, although it is one of “Cool Japan” item.

That’s because Nihonto or Katana (Japanese sword) is severely against manufacturing, possession, and sale to comply with the Firearm and Sword Possession Control Law except persons who has obtained permission from the police.

From when Nihonto or Katana has manufactured?

For more than 12 centuries the sword has had a spiritual significance for the Japanese, along with the mirror and the jewels, it is one of the three Imperial Regalia at that time.

The Japanese swordsmith was traditionally held in high regard. The earliest swordsmiths were often yamabushi, members of the Shugendo sect, who with there apprentices lived an austere and religiously dedicated life.

The approximately 200 schools of Japanese swordsmith-artists were scattered throughout Japan, each with its own history and its own identifiable and surprisingly consistent blade characteristics that can be traced down through the centuries. 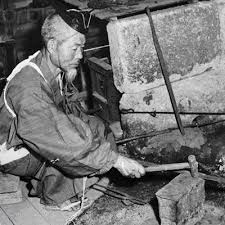 As early as the 8th to 10th century, sword blades of high-quality steel were being made in Japan. After the steel was forged, the “skin steel” was some 10 to 20 times hammered into plates, which were then hardened, broken into coin-sized pieces, stacked, and welded.

This hardened steel was later welded onto the surface of the less brittle inner steel. This repeated folding and welding gave the Japanese blade one of its unique qualities-a texture like that of the grain of wood.

The hamon, or temper pattern of the blade, is one of the most noticeable and beautiful features of the sword and also an important mean of identifying its origin.

By the early Kamakura period(1185-1333), this hamon was made to exhibit many shapes and forms.

Generally a specific type of temper or group of types was employed by an individual school or smith.

The final polishing and sharpening were done by a sword polisher, who set the sword to a series of stones of increasing fineness that were lubricated with water.

Ancient swords have comer down to us almost exclusively from the ancient burial mounds of the old tomb period (300-710) and are badly rusted.

These ancient blades were nearly always straight, with a very small and sharply angled slanted point.

Swords of the Nara period (710-794) and the early Heian period (794-1185) were similar to those found in the mounds. Being rather short and lightweight, they were probably used for thrusting rather than slashing.

From approximately the 9th and 10th centuries, blades were made longer with a slightly curved shape and with ridge lines on both sides, a far more efficeient weapon for mounted warriors.

The quaqlity of the sword greatly improved in the middle Heian and early Kamakura periods, or from approximately the 10th to the early 13th century, when its use markedly increased, especially by mounted warriors.

The swords of the Kamakura period are of the highest quality, both artistically and technically, and most of the National Treasure blades derive from this period.

In the late Kamakura period the sword became very long- in many instances as long as 1 to 1.5 meters (3-5 ft)-and was used exclusively by mounted warriors. Many of these were later shortened for use in hand-to-hand combat.

In the Muromachi period (1333-1568), as a result of prolonged strife and feudal combat, the production of swords increased in number but quality declined.

Swords became somewhat heavier and less curved, wider and considerably shorter, so that they could cut through the heavier armor then coming into use.

This new blade was called katana and was upward of 60 centimeters (2ft) in length. It was soon accompanied by a somewhat shorter blade, wakizashi.

The katana and wakizashi were worn thrust through the sash and these swords were called daisho,”long and short”. 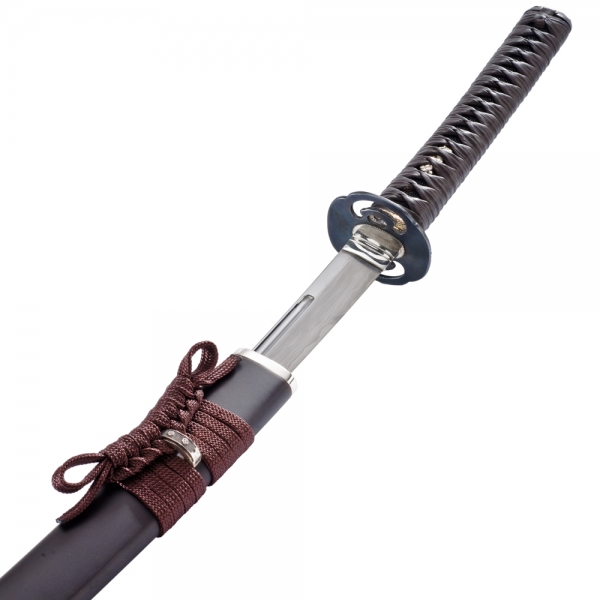 Many swords had extraordinarily brilliant tempering patterns, a substantial structure of well-hammered and well-tempered steel, and beautiful chiseled engravings and grooves.

Sword guards and other fittings for swords and for daggers became highly ornate.

The years from 1800 to the close of the Edo period are known in sword history as the New, New Sword period.

It was a brief renaissance marked by a final effort to revive the beauty and quality of the ancient sword.

The emperor Meiji promulgated regulations forbidding the making or wearing of swords but permitted a small number of smiths to continue their work in order to keep the art alive.

After World War Ⅱ, the Allied Occupation forces ordered all swords destroyed, but the order was modified to exclude swords of artistic, religious, or spiritual significance belong to museums, shrines , or private collections.

There has been a gradual renewal of interest in the art of the ancient sword, and a number of smiths are currently attempting to restore the ancient skills.

Finally, we have similar to the Japanese Swords “Japanese Swordsmithing from Sweden” and “Houchou(Kitchen Knife))“, both of which are recommendable to visit, thanks